Giggling during stressful situations like a funeral can be embarrassing. Yet, nervous laughter is a natural reaction and actually occurs quite commonly. 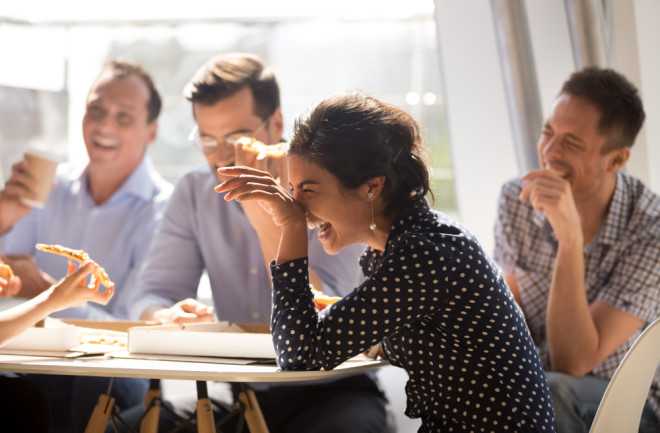 Laughter is best described as a physiological response to humor. In fact, humans can giggle as early as three months old. The fact that laughter kicks in before babies can even speak shows us the importance it plays in daily life: As a nonverbal communication cue, laughter plays a major role in social communication. The simple act allows us to connect with others.

However, chortles can also divide us: Some people can't help but laugh during extremely stressful situations such as a funeral. Typically, nervous laughter results from feelings of anxiety, tension, confusion or even embarrassment.

Nervous laughter was first studied by psychologist Stanley Milgram in the 1960s. Milgram conducted famous obedience experiments in which participants referred to as "teachers" were instructed to shock "learners" for wrong answers. The shocks increased in power from a slight shock of 15 volts to a severe shock of 450 volts. Though the learners didn't actually receive zaps, the teachers believed they did.

Interestingly, some subjects laughed when they heard screams from the supposedly shocked learners, and the nervous laughter rose according to volt increases. While the chuckles may have come across as rude and improper, the teachers clearly felt distressed when administering what they thought were painful punishments. Therefore, the overwhelming emotion led to a physiological response — in the form of laughter.

A Simple Way To Cope

You've seen people cry at weddings or scream in joy when seeing their favorite band in concert. In reality, laughing at a funeral isn't much different. These various reactions are considered incongruous emotional displays. In other words, they're emotions that don't necessarily match the occasion or one's internal state. But why do we experience nervous laughter in the first place? A team of Yale researchers aimed to figure out why.

Their 2015 article published in Psychological Science demonstrated that clashing emotions can occur in response to dramatic external stimuli, or any type of signal outside of the body that provokes a reaction.

For instance, a lottery winner might feel overwhelmed with joy and start crying. Because tears normally indicate sadness, it contradicts both the joyous situation at hand as well as the person's cheerful internal state. Yet, powerful external stimuli can produce such puzzling responses.

When people are overcome by these feelings, the researchers explained, their emotions often become unmanageable. Imagine a son attending his father's funeral where he can't help but cackle. Though this may come off as disrespectful, the funeral is likely filled with immense external stimuli which may overwhelm the son. Laughing, therefore, provides a coping mechanism.

Neuroscientist V.S. Ramachandran explored the idea of nervous laugher as a form of coping in his 2005 book, A Brief Tour of Human Consciousness. Laughter can signal to others that the cause isn't a threat, according to Ramachandran. In fact, nervous laughter even differs physiologically from regular laughter. He explains that nervous laughter typically occurs in the throat rather than the usual spot in the belly. In essence, nervous or inappropriate laughter can mask anxiety and signal to others that we're feeling fine, even during a stressful time period.

Is Laughter the Best Medicine?

Chuckles can be deemed unacceptable in many situations and attempts to hide them may feel embarrassing. Luckily, there are a few ways to mask inappropriate laughter.

Mindfulness meditation may help people gain better control over their emotions. Activities as simple as deep breathing exercises can calm the mind and distract from the external stressors that may induce giggles. Oftentimes, cognitive therapy can aid emotional regulation by teaching proper coping mechanisms.

Yet regardless of public disapproval, laughing during a stressful situation isn't always a bad thing. Sometimes it may be just what we need. "I think there are far more situations where lightening up and laughing more would be valuable," says Billy Strean, a professor in the Faculty of Kinesiology, Sport and Recreation at the University of Alberta, who has explored laughter's role in learning and overall wellbeing. He explains that laughter can work as a form of medicine.

Most importantly, it can serve as a natural stress reliever. According to the Mayo Clinic, the psychological benefits of laughing include improved anxiety, depression and stress. But it doesn't stop there.

Laughter can also bring physiological benefits, a 2016 study in the American Journal of Lifestyle Medicine found. The review explored how physicians can prescribe laughter as a natural medication. Its benefits include a strengthened immune system, relaxed muscles and increased blood flow to the organs.

Laughter delivers these physiological benefits by increasing the flow of oxygen, and thereby, natural endorphins in our brain. This process stimulates organs like the heart and lungs and promotes muscle relaxation. Because stress has been linked with a weakened immune system, laughter counteracts this by decreasing anxiety. Research also shows that chuckles boost the immune system by increasing the number of antibodies and T-cells within the blood that help fight infections.

Now more than ever, Strean says, laughter is useful to combat worries stemming from the pandemic, climate crisis and social justice struggles. "The more we can find the lighter side of life and create opportunities to laugh, the better," he says. "If you could put all of the benefits of laughter into a pill, it would be the best-selling pharmaceutical on the market."

More From Discover
Technology
Using an Automated Chemistry Lab to Find the Origin of Life
Health
There's So Much More To Explain About How Bodies Sense Pain
The Sciences
Can Humans (Briefly) Survive Decapitation?
Mind
How Fonts Affect Learning and Memory
Mind
Words Seem to Lose Their Meaning When We Repeat Them Over and Over. Why?
Mind
Volunteers Sped Up Alzheimer’s Research. Here’s How You Can Help, Too
Recommendations From Our Store
My Science ShopDiscover STEM Kits
My Science ShopDiscover 2022 Calendar
My Science ShopStrange Science
My Science ShopElements Flashcards
Shop Now
Stay Curious
Join
Our List