Why the Pandemic is Turning So Many People into Conspiracy Theorists

Large-scale crises can put a damper on critical thinking skills. 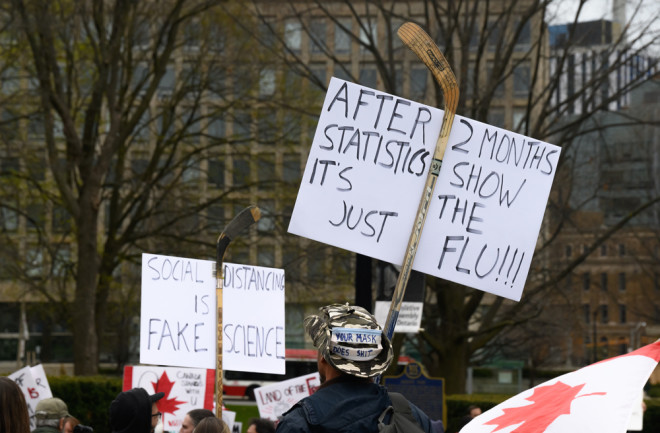 Protesters outside the Ontario Legislative Building in Toronto, May 3, 2020, protest the COVID-19 shutdown. (Credit: Puffin's Pictures/Shutterstock)

Since COVID-19 lockdowns descended, people’s longings for haircuts, child care and adult interaction have steadily grown. But there’s one thing for which our appetite seems even more insatiable: conspiracy theories.

The latest example making the rounds is the already-debunked Plandemic video, which argues that shadowy forces manipulated the virus to control people. Despite its out-there premise, the video has had serious uptake: It racked up more than a million views before YouTube removed it. Other discredited COVID theories have amassed their own cult followings.

It can feel baffling to watch friends and family passing on such theories like gospel. But to behavioral scientists, it isn’t really all that surprising — especially in the midst of a pandemic.

“There’s good evidence that conspiracy theories flourish during times of crisis,” says Joseph Pierre, psychiatrist and researcher at the David Geffen School of Medicine at UCLA. “When we feel insecure, we often look for information that provides an explanation for chaotic events.”

A Thirst for Meaning

People seek out alternate takes on reality when they’re inclined to mistrust official ones for various reasons. Groups most prone to conspiracy theorizing include people with lower socioeconomic status, those who have been excluded or ostracized and those who feel life is out of control. All of these groups’ numbers have swelled since the start of the pandemic. “Where people are feeling powerless, anxious and threatened,” says Northumbria University social psychologist Daniel Jolley, “conspiracy theories can offer some relief.”

When you’ve been relegated to an out-group, it’s easy to see conspiracy theories as the perfect antidote to exclusion. The theories give believers the heady sense that they’re special or set apart: Unlike all the other misguided “sheeple,” they reason, they now understand what’s really happening. Research confirms that people adopt conspiracy beliefs as a way to feel unique.

Conspiracy theories also stem from the very human tendency to look for patterns and broader meanings in the world. This tendency often promotes our survival as a species — it helps us recognize faces almost instantly, for one thing — but it can turn toxic when our pattern detector is “over-tuned,” so to speak. In a Union College study, subjects who believed in conspiracy theories were more likely to see meaning and intent in random movements of triangle shapes.

The conspiracy theories people gravitate toward the most are often the ones that mirror their existing biases. After the Plandemic video appeared, one fan wrote to the director, “I did massive hours and days of research, cross-referenced everything multiple times and your video helped confirm everything/95 percent of what I found.”

Conspiracists’ tinfoil-hat vibes might make them seem ridiculous, but the narratives they push are far from harmless. “The consequences of conspiracy theories are significant and wide-ranging,” says Jolley.

Not only do new theories discourage pandemic best practices like mask use, Jolley’s studies confirm that people steeped in conspiracies tend to become more prejudiced. They are also more likely to have violent intentions.

What’s the best way to respond when someone you know promotes one of these debunked theories?

Your first instinct might be to counter it with provable facts — a practice studies show may change minds, although not reliably. But experts caution that aggressive pushback may lead your debate partner to cling more tightly to false beliefs. “Most people who believe in conspiracy theories don’t trust the informational sources the rest of us rely on,” Pierre says, “which thwarts attempts at counterargument.”

Another approach is to suss out how a drive-by Facebook poster came to believe a theory in the first place.

“Start from a place of trying to understand, rather than trying to convince,” Pierre says. “Lead with questions like, ‘Who do you trust or mistrust and why?’ That can help establish the rules of engagement.” This tactic can also give you a sense of whether someone’s open to reasonable discussion — or whether they’ve gone too far down the wormhole to come back.

Editor's Note: We corrected a typo in the photo caption. The COVID shutdown protest was, of course, in 2020, not 2019. We apologize for the error.