Why Some Can’t Get Enough Of Hallmark Christmas Movies

Tradition and escapism are two reasons we can't get enough of Hallmark Christmas movies. 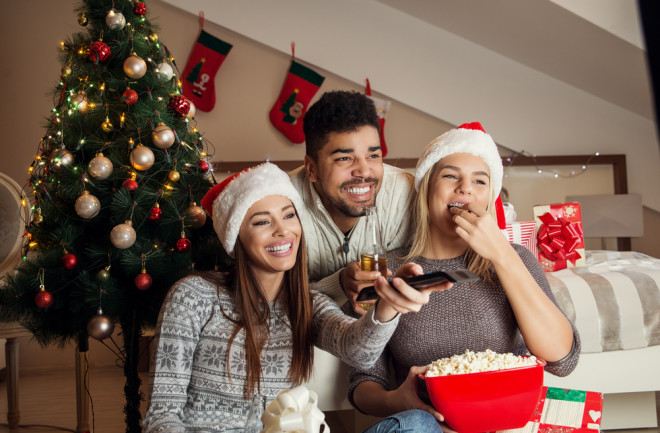 In the 2022 Hallmark Christmas movie, A Kismet Christmas, a famous author begrudgingly returns to her hometown after her publisher picks it for a promotional event. The author hopes to avoid her crush from her awkward teen years but immediately runs into him.

Like all of Hallmark's holiday offerings, the movie follows a fairly predictable storyline leading to a happy ending. Along the way, characters engage in holiday rituals like decorating the tree, making Christmas cookies and sipping hot chocolate.

This predictability has proven to be both highly pleasurable and profitable. Sixty percent of American households tune into a Christmas movie during the holiday season, and the leading producer of Christmas movies, Hallmark Channel, boasted 85 million viewers in 2021.

The films might be formulaic, but the reasons why they are beloved are more complex. Only recently have social scientists begun trying to understand this genre, and they are finding multiple reasons why people watch.

"We Need a Little Christmas"

In a 2022 study in The Journal of Popular Television, a team of researchers recruited participants at Christmas Con, an annual convention for holiday film buffs. Participants completed a questionnaire in which they agreed or disagreed with statements using an 11-point scale. They then responded to a structured interview.

Three distinct viewer profiles emerged from the responses. The first group, dubbed "The Season's Greeters," enjoyed the rituals and cheer of the holiday season. They used the films to extend the holiday season into the early autumn when others focused more on events such as back-to-school activities or Halloween festivities.

The second group, "The Rudolphs," viewed holiday movies as a way to escape into an idyllic world where problems were easily solved. Participants in this group described feeling stressed in their personal lives and articulated negative feelings about the state of world affairs. The movies were a break from what they felt was a dismal news cycle.

Other scholars have also observed "The Rudolph" rationale in which people take a mental break from news about out-of-control wildfires or domestic terrorism and instead focus on romance and family as the movies promote. In doing so, the movies make the world seem smaller and more manageable.

The last group, "The Carolers," were in it for the storylines. They liked the reliability and the guaranteed happy endings. The rest was just details. The Carolers didn't have a great connection to Christmas traditions. And awkwardly, given that they were at a convention featuring Hallmark's most popular movie actors, they also admitted they didn't have a must-see actor whose films they anticipated each year.

Christmas movies on Hallmark, Netflix and other channels are almost exclusively romantic comedies. As a genre, some media scholars have argued that romantic comedies are understudied because researchers feel they are so predictable that they don't need further study.

However, the fact that Christmas movies are so formulaic prompts other scholars to feel they require further analysis. What does it mean that viewers are tuning into films with similar plotlines and criticisms of modern life?

Christmas movies reflect a disenchantment with how things are and a yearning for how things could be. The characters, for example, reject materialism and prioritize handmade or sentimental gifts. In Hallmark's 2022 "A Holiday Spectacular," for example, the main character cringes when her fiancé tells her to pick out a necklace for herself while she's visiting New York City as her gift from him. She then admires her photographer friend's photographs of her enjoying the first snow of the season.

The rejection of materialism fits with the Christmas movies' consistent casting of Big Business as the recurring villain. Scheming business owners are either defeated (or converted to a new way of thinking) when they try to take over the small town's beloved Christmas tree farm, ski resort or candy cane factory. Small businesses prevail, and the characters' core values regarding family and tradition are upheld.

The movies also put forth a beloved protagonist who leads other characters through childhood favorites like making a snowman, decorating cookies or performing in a holiday recital. These traditions aren't belittled and are even treated as integral to the community. In Hallmark's 2018 film, "Christmas Joy," for example, the main character takes a leave of absence (despite being up for a promotion) to take her aunt's place in the town's annual bake-off.

In Christmas movies, scholars see viewers tuning into a world that is a better version of our own — less materialistic, less corporate controlled and with a greater sense of community (and cookies). Problematically, scholars have found these worlds lack diversity.

In the two decades since TV holiday movies began, actors of color have primarily been cast in side roles. And characters in same-sex relationships didn't even appear on Hallmark until 2020 when the main character's best friend in "Christmas with the Darlings" needed a nudge to ask out the barista from the local coffee shop.

Christmas movies, however, are unique in how they feature women as main characters. An analysis of 1,300 films from 2007-2019 found that only 43 percent had women as leads or co-leads. Only 17 percent featured leads or co-leads from underrepresented groups. On Netflix, 47 percent of leads were female, and 34 percent of the main cast were from underrepresented groups.

In 2021, a Hallmark executive estimated about 25 percent of their movies "had diversity in them" but said they hoped to make changes. The channel's parent company hired a new President and CEO, and the 2022 line-up included the first-ever plus-size, Asian and LGBTQ+ leads.

Media scholars have long argued that representation matters, and diversifying Christmas movies will mean more people can enjoy escaping into an idyllic world in which the Christmas tree farm is saved and the boss OKs time off for a holiday cookie-baking challenge.