Horror movie soundtracks might draw on the most familiar expression of terror that we know. 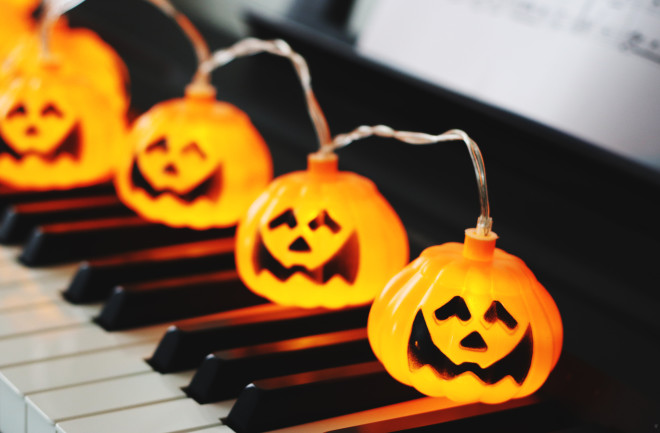 Hiding under a pillow during a horror movie can be an effective strategy for filtering the most brutal moments in a film. But often, even behind tightly closed eyes, you can't escape the suspense, with a soundtrack cluing you in on when the protagonist is about to fight for their life, and when the threat is finally over.

Though it can be hard to put your finger on what exactly makes music scary, researchers are trying to identify an explanation. So far, there’s evidence that a given tune might give us the heebie-jeebies because it mimics the sounds humans make when we are terrified: screams.

If You Can't Say It, Play It

Researchers have long suggested that music conveys specific feelings because the notes imitate sounds people make when expressing those sentiments. One theory goes as far as suggesting that music and speech evolved together as techniques our ancestors used to get their feelings across.

Some associations between music and our emotions are harder to identify, says Caitlyn Trevor, a music cognition researcher at the University of Zurich. A melody might sound happy because the notes bounce around a scale, the way our speech rises and falls when we’re in a good mood, Trevor says. Screams are like laughter, however, in that both are more distinct sounds that could be copied into music, whether a composer knows they’re mimicking them or not.

“A lot of those sounds are, in my opinion, kind of like a template in your head,” Trevor says. “That's what we're sort of looking for: How is music kind of mirroring the same cues you hear in the voice?”

Trevor and her colleagues recorded the sounds of some people screaming and collected bits of music composed for the peak moments of tension in horror movies, like during a monster attack. Amongst other qualities, the team wanted to know how well the roughness of scary music matched the roughness of our screams. Grating, strained qualities appear in our yells because we’re pushing air through our vocal cords too forcefully, something you know already if you’ve ever woken up with no voice after yelling all night at a concert. Instruments pushed past their intended limits can make similar, irritating sounds, Trevor says. As a cello player, Trevor could force the bow down onto the strings too hard, driving a groaning sound out of the instrument.

When Trevor and her colleagues played back the audio clips in the lab, listeners ranked screams as being more emotionally intense and more negative than normal human sounds; ditto for comparisons between peak-action audio clips and the kind of music that accompanied neutral scenes in the same movies.

Music accompanying the most stressful horror flick scenes also carried rough elements like real screams, though they were somewhat duller than our own vocalizations, the team found. That might be why the music doesn’t always stop us cold, like a real scream can.

Researchers at the University of California, Los Angeles and Kingston University in the U.K. ran a similar study and got similar results. Instead of pulling from horror movies, the team made audio clips where some sounded neutral and others included harsh, grating sounds. When played for study participants, people ranked the clips with distorted components as having stronger and more negative elements than audio without the grating sounds.

What music is meant to elicit and what it actually makes us feel is two different things. The second one is harder to detangle, Trevor says, and depends on context, like what someone associates with a given song. In the study where the researchers made up their own music, they also asked some participants to rate song emotion and intensity while the sounds accompanied fairly boring footage of people drinking coffee or turning a page in a book. The added footage prompted viewers to consider the music as less emotionally intense, for reasons the researchers don’t understand.

This is all to say that horror movie music might not prompt the exact reaction out of you that it intends to. But if it does, researchers like Trevor want to know. Scary soundtracks are rooted in part in classical music, Trevor says, which itself stems from centuries of development. And who knows, the urge to throw your hands over your face while a main character fights off a demon might be exactly the reaction a prehistoric human first thought to try and get out of you.