Why Our Brains Merge the Past

The mind combines recently viewed images, and even operates on a quick delay, to help process the world around us. But these features can come with downsides. 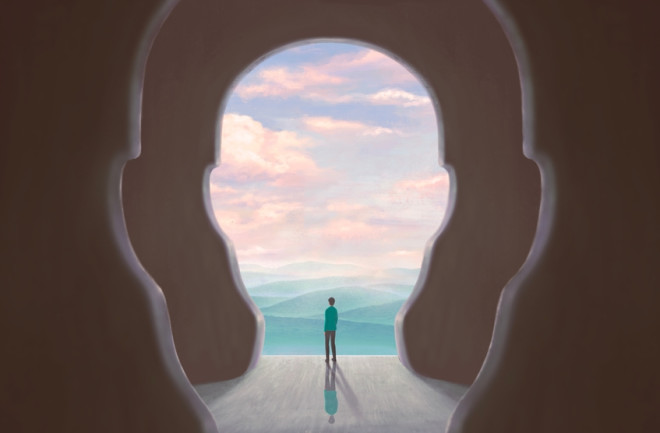 When Captain Marvel actor Brie Larson accepted the MTV Movie Award for “Best Fight,” she didn’t approach the stage alone. Instead, Larson used the opportunity to introduce her two stunt doubles. These agile actors frequently filled in for more daring scenes, but quick editing cuts may lead audiences to assume it was Larson herself swinging from ropes or sprinting atop a moving train.

Neuropsychologists call this phenomenon a “continuity field”: We visually merge the images observed in the previous 15 seconds to stabilize our visual input. This explains why we don’t typically notice certain subtle changes, such as when actors like Larson are swapped with stunt doubles.

New research into the continuity field suggests that the brain not only merges images from the previous 15 seconds, but it also operates on a 15-second delay. Some scientists say this process is helpful in streamlining the chaotic visual fields we must consistently process — but they’re also finding that operating on a delay means we may unknowingly blend images from the past into our present.

For most people, the perception of noise extends beyond hearing. Visual input can also be noisy due to frequent disruptions. As our eyes scan our environments, our brains process changes due to light, movement and the interference of our own blinks.

Precisely how we make sense of a chaotic environment has interested researchers for hundreds of years. Multiple theories attempt to explain how our brains present a smooth visual field without disruption. One theory suggests that the brain provides a compilation of images perceived in the previous 15 seconds. This visual mashup helps us ignore minor distractions like changes in light or shadow movements.

Without this mashup, researchers think our ongoing visual experience would feel similar to walking while looking at a smartphone in camera mode. The view would be jumpy, disoriented, and hallucination-like.

And living 15 seconds in the past allows the brain to ignore fluctuations and streamline visual input. It’s far less noisy — but it also means we may miss subtle changes and erroneously think an image from the past represents the present.

To determine whether the brain is biased toward the past, researchers had study participants watch 30-second videos of a young person’s face and guess their age at the end of the clip. Some subjects viewed an image of a person that morphed from age 13 to 25.5 years old in one-year increments. The control group, meanwhile, watched a clip of static images of the same person progressing in age.

When asked to guess the person’s age, participants showed a bias toward the past and most picked a final age that actually showed up halfway through the morphing video. Thus, the average guess was five years younger than the correct age of 25.5 years.

It seems that while watching the video, the participants’ brains condensed the visual input into a single snapshot, the authors concluded in a 2020 Science Advances study. Because the brain demonstrated bias toward the past, participants recalled a face that popped up halfway through the video rather than at the end.

This behavior can help save cognitive effort and energy. It can ultimately be quite useful by enabling us to condense tremendous amounts of information into more manageable representations. Some researchers have compared it to perceiving a forest instead of every single tree.

Other research has found that our visual mashup mechanisms can also result in confusion. This can be particularly problematic when it comes to medical imaging. For a 2021 study published in Cognitive Research: Principles and Implications, researchers recruited 11 radiologists and asked them to look at simulated mammograms with lesions. The radiologist was then tasked with recreating the shape of the lesion they just viewed. Each participant repeated the task 255 times. The researchers also repeated the experiment with a control group of students they called “untrained observers.”

These results challenge the notion that a radiologist approaches each task with a fresh view. Rather, they may actually be influenced by images they have recently observed. The authors noted the study had real-world implications outside of the laboratory because radiologists have an average daily error rate of 3 to 5 percent. In the future, understanding how the brain is biased to the past might help reduce medical errors.