Why I love George Hrab, by Phil Plait It's not his manly bald head, though that helps. It's not his weird Clark Kent glasses which fool no one. It's not his spectacular six-pack abs which ripple and fold like the Rocky Mountains I see out my west window. It's not his mellifluous voice which rides the waves of the Universe's undertones. Actually, it is all those things. 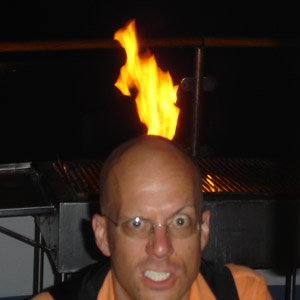 But it's also because of Geologic Podcast #83, where he drops a joke in just for me (go to about 19:45)^*. Also, because he talks up the very capable ARealGirl, too (that starts at 9 minutes in). And when I read her name, it always sounds in my head like "areal girl", like she's an adjectival phrase for a girl who takes up two-dimensional space. Maybe that's just me. Anyway, I love me that George Hrab.

Edited to add: It occurs to me that a lot of people won't get the joke George makes to which I refer. This may help, as well as this.