Why Do We Dream? Science Offers a Few Possibilities 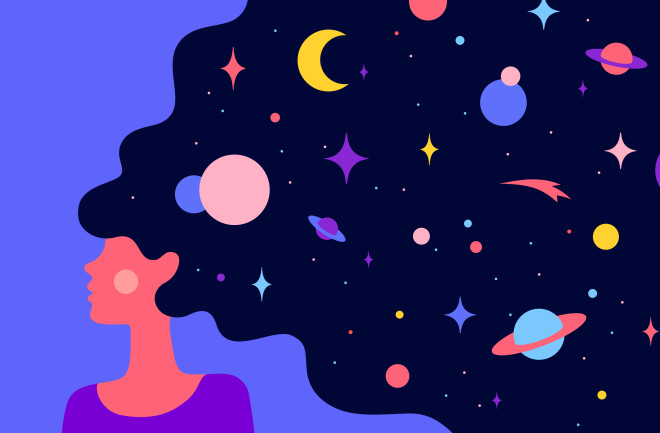 You might find yourself tumbling down an endless void. Or you’re being chased by a seriously annoyed alligator. Maybe you’re even back in school, about to take a history exam without having studied — and, yes, you’re also completely naked.

Whether it’s about a long-lost acquaintance or bees with teeth (don’t ask), dreaming is one of the oddest things we do. These nocturnal hallucinations tend to be most vivid during a kind of sleep called rapid eye movement (REM). And even when we don’t remember them, most of us typically spend around two hours each night dreaming. But why do our minds race even while we’re sound asleep?

Humans have been musing on the reasons behind these nightly mental jaunts for millennia. If you plug “why do we dream” into Google, you’ll get nearly 4 billion — specifically, around 3,610,000,000 — hits.  But even today, scientists still don’t entirely agree on the purpose of dreaming. By contrast, there’s loads that we do know about the role of sleep, which has been found to help boost brain function, regulate our immune systems and promote physical activity.  The study of dreams is particularly daunting because scientists often have to rely on reports from recently awakened subjects.

Within the scientific community, says Harvard psychologist and dream researcher Deirdre Barrett, there are a huge number of ideas about the exact function of dreams. “Possibly as many as there are dream psychologists,” she adds. While there’s no consensus yet, here are a few of the more prominent theories on why we dream.

A Byproduct of Neural Activity

Dream theory isn’t limited to a single scientific discipline. Sigmund Freud spurred decades of debate with his oft-referenced psychoanalytic approach. He suggested that dreams — which are partially drawn from stimuli and experiences in the waking world — are a road map to the unconscious, reflecting our deepest desires and wishes.

The activation-synthesis model of dreaming, however, looks at the question through a neurobiological lens. Proposed by Harvard psychiatrists J. Allan Hobson and Robert McCarley in 1977, the theory posits that dreams are your brain’s attempts to make sense of random patterns of firing neurons while you slumber. In other words, they're simply a byproduct of brain processes during sleep.

According to this model, certain circuits in the brain stem switch on during REM sleep. Once activated, parts of the limbic system that deal with memory and emotion — like the hippocampus, involved in the formation of long-term memories, and the amygdala, which governs responses to fear — generate an array of electrical signals. Then, the brain tries to weave meaning and narrative structures into this activity upon waking, giving birth to dreams.

But Patrick McNamara, a neurologist and dream researcher at Boston University School of Medicine, notes that we’ve come a long way since the theory was first introduced in the ‘70s. “If you talk to Allan Hobson now, I don’t think he’d say that’s really what he thinks about how dreams operate,” says McNamara. “It’s too simplistic to say that the brain just takes these random activation patterns [and creates dreams].”

Beyond that, he says, these patterns aren’t random. “There’s a specific set of regional brain networks that are highly activated during REM [sleep] and dreaming,” he continues. “So they’re not just trying to handle random impulses coming up from the brain stem and then spinning a story around those impulses.” These brain networks, says McNamara, are doing specific kinds of work and creating specific dream content.

Another theory about the role of dreams is that they help analyze and consolidate memories, a process where recent, learned experiences are converted into long-term storage. McNamara says that dreams specifically help store memories of emotional experiences — and help regulate our moods the following day. “There’s very good evidence that dreams are very good at modulating trauma and fear,” he says.

Decades of research have led scientists to link REM sleep with memory consolidation. But the specific brain mechanisms behind that storage have been harder to pinpoint, until recently. Advances in optogenetics, a technique for stimulating neurons that are genetically modified to respond to pulses of light, are now enabling researchers to look at precise populations of neurons during REM sleep. In 2016, a study in mice using optogenetics found causal evidence that a type of brain wave called theta oscillations is required for memory consolidation. This past June, researchers from the University of Tsukuba and the University of Tokyo in Japan used the same technique to identify a small group of neurons in the hippocampus — called adult-born neurons — that also aid memory storage.

Other theories maintain that dreams can serve as a virtual simulation of waking life. The threat simulation theory of dreaming, for example, holds that our dream consciousness is basically an ancient biological defense mechanism; a natural result of our evolution. Essentially, dreaming enables the brain to rehearse new survival strategies without having to defend against an actual threat. “All the data about dream content supports the idea that there are a lot of dreams about threats,” says McNamara. “Everything from snake bites to social threats.”

But McNamara says that it’s still not clear whether or not all that subconscious training actually makes a difference during the day. “I don’t think that’s been demonstrated yet,” he says. “But it seems reasonable. If we’re simulating [threats] during the night, presumably that’s a form of practice. And somehow that carries over into the daytime.”

Similarly, the social simulation theory argues that our dreamscapes provide a consequence-free zone for the brain to practice social and behavioral strategies. The idea here, says McNamara, is that dreams help simulate our social reality so that we can better navigate interactions and relationships. “If that’s the case, dreams are really important for social cooperation, as well,” he adds. For example, if you dream about interpersonal conflicts — say, a tiff with a friend or a misunderstanding with a coworker — then you do better at handling those conflicts the next day, says McNamara.

Then, there’s the idea that dreams can be a canvas for creativity. Pop culture is rife with creative types who have used dreams as their muse, whether it’s Salvador Dali’s iconic imagery of melting clocks or the nonsensical chorus of John Lennon’s #9 Dream. Filmmaker Christopher Nolan even found inspiration for his reality-bending thriller Inception from his own experiences with lucid dreaming.

Barrett says that dreams can lead to creative breakthroughs when they help us solve a problem that requires vivid visualization. “Whether that’s an artist trying to come up with inspiration for a new painting or inventors [making] 3-D devices,” she says.

Beyond that, dreams can help us grapple with problems that might defy conventional wisdom. Barrett points to 19th century German chemist August Kekulé, who claimed his dream of a serpent eating its own tail led him to discover the ringed structure of the molecule benzene. (Other scientists at the time had thought that all molecules would follow a straight-line structure.) “Anytime we need to think outside the box, dreams are good at that,” she adds.

And while these theories can seem contradictory at first glance, Barrett notes that they might all be different pieces of the same puzzle. “Asking what dreams are for is like asking what waking thought is for,” she says. “[They’re] a little bit for everything. […] It’s naïve to think that most evolutionary developments just have one purpose.”