Why Do Some Irish Drink So Much?

An interesting new paper asks Why Do Some Irish Drink So Much?(EDIT: please note, this is the actual title of the paper) In a survey of students attending University College Dublin, (n=3500 respondents), the authors examined self-reported alcohol consumption. Participants also answered various questions about their family background and their place of origin, to allow the authors to investigate possible geographic influences. It turned out that students from the Republic of Ireland drank more, on average, than international ones. Those Irish students are the focus of the rest of the study: Perhaps surprisingly,

most aspects of family background were not associated with student drinking

We find relatively small effects of parental background variables on how much their college attending children drink. Neither father’s education, mothers’ age, whether a parent is still married, and parental incomes have any statistically significant effects on students’ drinking...

But there was one major exception - the amount a student's parents and older siblings drank exerted a strong effect:

We find that drinking of mothers significantly impacts the number of drinks consumed by both female and male students about equally. But drinking of fathers appears only to influence drinking of their college attending sons... In addition, in our models parental drinking amounts have just as much influence on seniors as on freshmen at this school indicating no decay in the influence of parents drinking as a function of years attending college. Estimated effects of sibling drinking are large and statistically significant and affect male and female students equally.

Boys who attended an all-boy's school, or a boarding school, also went on to drink more in college. 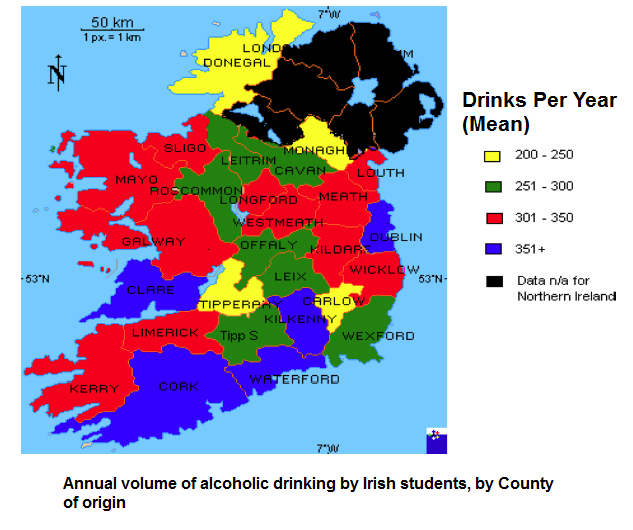 The most interesting results, though, were in terms of geography. Roughly speaking, the regional influence of Catholicism was negatively correlated with drinking. For example, counties where voters supported legalizing divorce in the 1996 referendum (a move that was opposed by the Catholic Church) had higher drinking. Towns where more Masses took place per week produced students who drank less. English cultural influence, however, meant more drinking: students from towns with a cricket club (this sport being, of course, English and so a marker of historical influence) drank more than those from places uncontaminated by bats and wickets. There was no evidence, however, that the weather mattered: home town rainfall and temperature were not correlated with alcohol consumption. This counts against the idea (apparently a popular one) that Ireland drinks a lot because it's rainy and there's nothing else to do. This is a nice study, although it does suffer from being a student sample and purely self-report. It's also a useful reminder of the importance of not confusing correlation with causation. Living near a cricket club clearly doesn't cause anyone to drink more. It's a marker for other cultural factors, no less real, but hard to measure directly. But it is easy to forget this, to see only the tangible tip of the iceberg and overlook the true causes beneath the surface.

Delaney L, Kapteyn A, & Smith JP (2013). Why Do Some Irish Drink So Much? Family, Historical and Regional Effects on Students' Alcohol Consumption and Subjective Normative Thresholds. Review of economics of the household, 11 (1), 1-27 PMID: 23662096