Compliments have the ability to do more than just make your day. Research shows that receiving genuine compliments can boost your health and enhance performance. 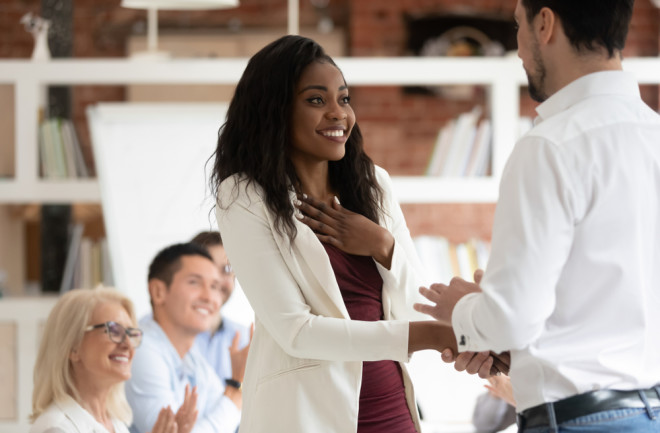 "You have the kindest heart." "Great job on that presentation today!" "I love what you've done with your hair."

Who doesn't love a good compliment? Take it from the father of psychology himself, Sigmund Freud, who concluded that we all possess a certain level of narcissism from birth. According to Freud, humans have an innate need for approval. It's no wonder that we all love a good ego booster. In fact, we can even link compliments to our personal identity. According to Mark L. Knapp, an interpersonal communication expert at the University of Texas at Austin, when someone else compliments us on something we're good at, we incorporate that into how we see ourselves. Many even go so far as seeking out compliments to further solidify that image.

"We all seek recognition and support in order to live a healthy life and when there are no compliments, we feel psychologically undernourished," says Knapp.

Your Brain on Compliments

Even though compliments can't pay the bills, people singing your praises can make you feel like a million bucks. Scientists have found this to be true, with compliments lighting up the same part of the brain that gets activated when you receive a monetary reward. Researchers exploring social decision making performed monetary and social experiments on 19 subjects while using fMRI imaging to map the participants' brain activity. The results revealed that both compliments and monetary rewards activate the same reward-related brain area called the striatum. This is because both compliments and money fulfill basic human needs — compliments serve as a social reward that fulfills our emotional need to be recognized and accepted by society. Monetary rewards, on the other hand, are classified as non-social rewards that satisfy our desire for security and safety. While the two rewards are fundamentally different, both can motivate us equally.

Receiving praise can actually have a multitude of benefits. A 2012 study revealed that receiving compliments can help improve motivation and performance. 48 adults were asked to learn and perform specific finger patterns, which involved pushing keys on a keyboard in a particular sequence, while their performance was timed. After they repeated the finger exercises the following day, the group who received direct compliments from an evaluator performed better than the other participants. The researchers concluded that receiving compliments can serve as a social reward while encouraging other participants to perform better.

The Right Way To Compliment

Typically, compliments are seen in a positive light. However, our intentions to compliment may not always be so pure. "Sometimes we do it in order to manipulate others," says Knapp. "We know others like compliments, and will like us for giving them." Often, the reason for giving compliments can be a form of ingratiation. This persuasive technique is used to appear more likable by others. For instance, compliments can be used to get in the good graces of a boss or someone in a higher status.

A 2010 study explored the effectiveness of compliments as a compliance strategy, testing whether receiving praise would increase an individual's willingness to follow along. Participants were asked to fill out a survey while an actor, who posed as the psychology student conducting the survey, struck up conversations with them. Some conversations involved the actor complimenting participants. All participants were then asked if they would like to help hand out flyers about a university careers event. 79 percent of participants that were complimented offered to help, compared to only 46 percent that weren't complimented. The results also demonstrated the importance of reciprocity: People receiving compliments were more likely to return the favor through a helpful act of service.

Despite the benefits of complimenting, an ingenuine compliment can still backfire. When we give out compliments, we are acknowledging praiseworthy behaviors and actions in others. False flattery is not only typically noticeable, but also can call the speaker's intentions into question and make them out to be untrustworthy. That's not to say we should stop giving out compliments altogether. Knapp says that, like gift-giving, genuine compliments that recognize positive behaviors and support others can also make the receiver feel good. As long as you're being genuine, your compliment might just make someone feel like they've won the lottery.