Why Did Consciousness Evolve, and How Can We Modify It? 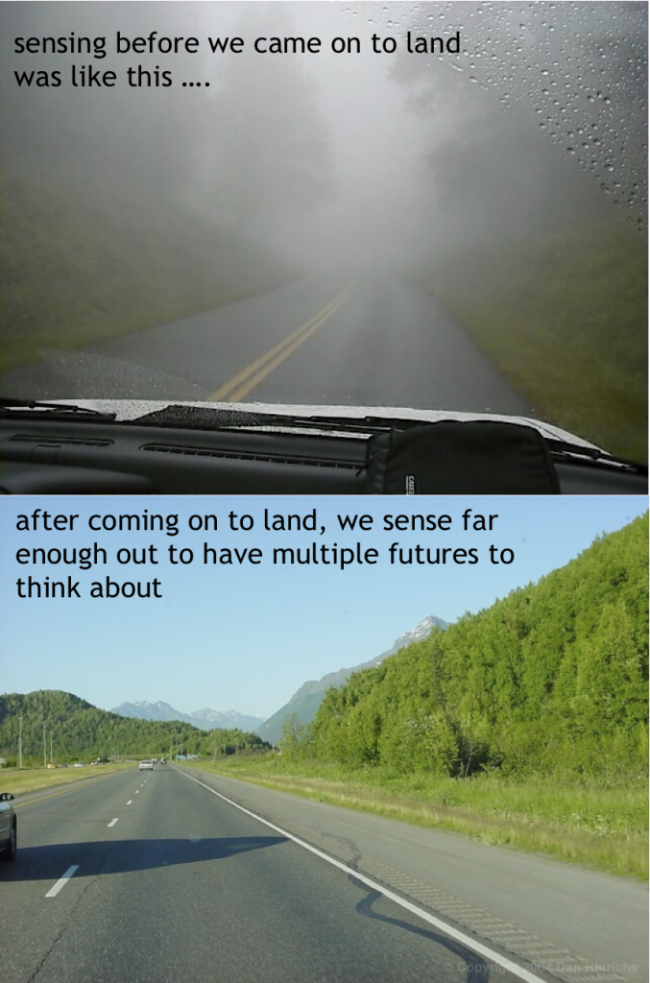 sponsored by the Science Entertainment Exchange. It was a fun time, and our moderators, Josh Clark and Chuck Bryant from the HowStuffWorks podcast

, emceed the evening with just the right measure of humor and cultural insight. In my twelve minutes, I shared a theory of how consciousness evolved. My point was that if we understand the evolutionary basis of consciousness, maybe this will help us envision new ways our consciousness might evolve further in the future. That could be fun in terms of dreaming up new stories. I also believe that part of what inhibits us from taking effective action against long-term problems—like the global environmental crisis — may be found in the evolutionary origins of our ability to be aware. This idea is so simple that I’m surprised I’ve not yet been able to find it already in circulation. The idea is this: back in our watery days as fish, we lived in a medium that was inherently unfriendly to seeing things very far away. The technical way this is measured is the “attenuation length’’ of light through the medium. After light travels the attenuation length through a medium, about 63% of the light is blocked. The attenuation length of light in water is on the order of tens of meters. For a beast of a meter or two in length, which moves at a rate of about a body length or two per second, that’s a pretty short horizon of time and space. In just a few seconds, you’ll reach the edge of where you were able to see. If you’re down in the depths at all, or in less clear water, you may reach the edge of your perceptual horizon in about a second. Think about that: life is coming at you at such a rate that every second unfolds a whole new tableau of potentially deadly threats, or prey you must grab in order to survive. Given such a scenario, we need to have highly reactive nervous systems, just like we revert to when we find ourselves driving in a fog or at night along a dark and winding road. The problem is that there was no respite from this fog. It was an unalterable fact of how light moves through water, relative to our own movement abilities and size. But then, about 350 million years ago in the Devonian Period

started making their first tentative forays onto land. From a perceptual point of view, it was a whole new world. You can see things, roughly speaking, 10,000 times better. So, just by the simple act of poking their eyes out of the water, our ancestors went from the mala vista of a fog to a buena vista of a clear day, where they could survey things out for quite a considerable distance. This puts the first such members of the “buena vista sensing club” into a very interesting position, from an evolutionary perspective. Think of the first animal that gains whatever mutation it might take to disconnect sensory input from motor output (before this point, their rapid linkage was necessary because of the need for reactivity to avoid becoming lunch). At this point, they can potentially survey multiple possible futures and pick the one most likely to lead to success. For example, rather than go straight for the gazelle and risk disclosing your position too soon, you may choose to stalk slowly along a line of bushes (wary that your future dinner is also seeing 10,000 times better than its watery ancestors) until you are much closer. Here’s an illustration of the two scenarios: 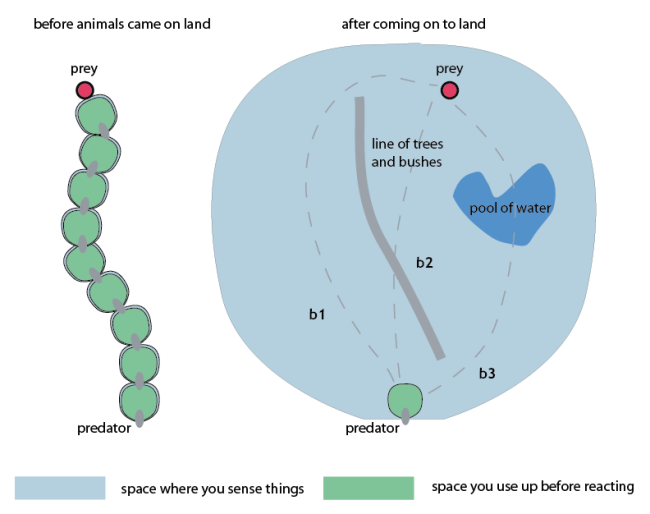 On the left, we have the situation when the distance we sense is close to the distance we will move in our reaction time (our reaction time is about 1/3 of a second; from that point to when we will stop is a bit longer– like those diagrams you see of stopping distance when driving at night show). There isn’t a whole lot of space to plan over. On the right, we can fit three very different plans to get to our prey: b1-b3, among others. So what does this have to do with consciousness? In 1992, psychologist Bruce Bridgeman wrote

that “Consciousness is the operation of the plan-executing mechanism, enabling behavior to be driven by plans rather than immediate environmental contingencies.” No theory of consciousness is likely to account for all of its varied senses, but at least in terms of consciousness-as-operation-of-the-plan-executing-mechanism, due to some very simple “facts of light,” dwelling on land may have been a necessary condition for giving us the ability to survey the contents of our mind. “Buena vista consciousness,” for lack of a better term, might have been the first kind of consciousness that selection pressures could have brought about. Given this picture of how a certain kind of consciousness came about, what are the knobs we might twiddle, either for the love of story making, or so that our transhumanist future selves might be conscious in a different way? Let me borrow a moral quandary from philosopher James Rachels

. Maybe you're eating a sandwich right now. There is a child, far away, who is not, and who is about to die for lack of food. Surely, if that child were beside you, you would share your sandwich. But, then, what's keeping you from sharing that sandwich anyway? The shipping costs? That's easily avoided - we find someone on the ground who can buy the sandwich locally. If you think through the various possibilities, the only answer you eventually come to is that the starving child is too far removed from your state of awareness to really matter to you. Likewise with any number of a host of environmental devastations that are going on at this moment. So, what if we massively expanded the blue space in the picture above, our sensorium? I don't mean watch video of distant places (which surely is part of the way), but use artificial retina technology

to directly pipe visual images from a disconnected place directly into your brain? Say, of the rain forest that is currently being destroyed so that an industrial meat producer in Peru can provide fast food chains in our country with low cost beef? This would be disruptive technology on a big scale. Here's another thought experiment: Notice that there is only one being in the pictures above. Consciousness does seem to be for one being at a time. What if we reengineer things so that we see what others in our group see, or so that when you do something good, the entire group feels good, rather than just you? This kind of consciousness has been explored in science fiction (The Borg

on TV), and in art (Mathieu Brand's Ubiq

). We even know mechanisms of how something like the hive mind of bees work, such as regulation of the division of labor through various genes and hormones

. Could something like this be the antidote to the endemic selfishness of Homo sapiens?

More details on the idea of buena vista consciousness can be found on pages 492-499 of this chapter I wrote in 2009.

UPDATE: A more technical paper describing how to quantify sensory and movement spaces is here.