Why Burnout Makes You Feel Like You Can’t Think Straight

When you’re burned out, new research shows, your focus and decision-making skills take a major hit. 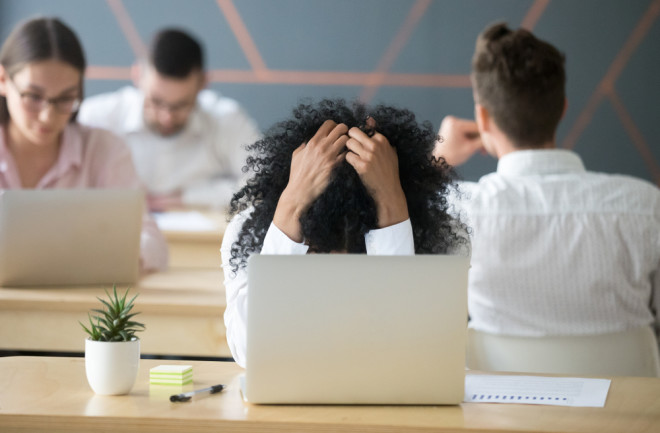 Jacqueline Kerr couldn’t shake the sense that her brain was betraying her. She worked demanding positions as a grant writer and public health researcher, but struggled to maintain focus. She would sink her teeth into a work project and something else would interrupt: A phone call, a child needing pick-up from camp.

Her responsibilities made her mind feel "swamped and submerged," she says — a feeling that intensified after the COVID-19 pandemic hit.

"By a few weeks in, I was just absolutely, you know, fried. As a mom, you carry such a mental load at home, on top of any work challenges," Kerr says. She worried that feeling mentally overwhelmed would hinder her work performance. "Your brain is your resource, your commodity, your value."

Kerr was suffering from burnout — mental exhaustion and depleted motivation that stemmed from life stress, often work-related. The pandemic kicked Americans’ burnout symptoms into high gear: Fully three in five workers reported negative psychological effects of work stress, including about one in three who reported "cognitive weariness," according to the American Psychological Association's 2021 Work and Well-Being Survey,

Recently recognized as an official medical phenomenon, burnout touches on a series of widely acknowledged health effects. Chief among them, researchers say, are documented brain changes that can lead to cognitive issues. This includes an inability to focus, a tendency to make mistakes on routine tasks, and trouble keeping life stresses in perspective.

Burnout and the Brain

When burnout strikes, your brain blasts out large quantities of the neurotransmitters dopamine and norepinephrine. That flood of stress-related chemicals can impair the functioning of your brain’s prefrontal cortex — a command-and-control center that helps you assess complex situations and make decisions.

In a recent Yale University study, researchers showed that chronic stress causes a loss of connection between prefrontal cortex cells. Normally, the prefrontal cortex helps you evaluate stress signals coming from your brain’s amygdala and keep them in perspective.

But when you’re burned out, the amygdala tends to become larger than usual. And when the weakened prefrontal cortex doesn’t push back enough on the amygdala’s alarm signals, you tend to focus more intently on your stress, which creates even more stress.

"The feedback loop goes on and on," says Employee Relations Executive Josh Hart.

Compared to normal control participants, burned-out subjects in a study at Sweden’s Karolinska University were less able to regulate their negative emotions.

Burnout also puts a damper on your mental efficiency and accuracy. Studies at Sweden’s Umeå University have found that people with burnout suffer some executive function deficits compared to healthy people. They perform worse in word recall games and forget to follow through on planned tasks, for example.

And in a Stanford University study, physicians with burnout made work errors about twice as often as their less-stressed counterparts — a finding that echoes entrepreneur Amit Raj's experience working as a pharmacist.

"The more we worked and the higher the volume, the more likely I was to make mistakes," Raj says. "That would lead to unnerving frustration, which would result in even more mistakes."

That kind of vicious cycle can spur enough self-doubt to make employees leave their chosen field, which helps explain why so many workers have fled healthcare since the pandemic began.

The good news is that some burnout-related cognitive changes are reversible, at least to an extent. In the Karolinska University burnout study, people who initially had thinned-out prefrontal cortexes got cognitive therapy to cope with their stress. By a year or two later, their prefrontal cortexes had returned to normal, and they also could put their negative emotions in perspective.

Besides therapy, one way to regain mental clarity is to establish a stronger sense of control in your work life, says Kerr, who now hosts a podcast for working moms about overcoming burnout.

Burnout often arises when people feel they can’t do anything to improve their situation, and this so-called "uncontrollable stress" is tied to burnout-related brain changes. But when employees receive training in how to set boundaries and negotiate their workload with bosses, they learn to feel much more in control.

Kerr thinks more employers should subsidize this kind of coaching. "People turning up to work who are in a better physical and mental state — that’s just such an important bonus for the whole organization."

In the end, what made the biggest difference for Kerr was a deliberate mental reset. She scored a free week at a nearby co-working space and delegated all kid duties to her partner for the week. She was stunned by how clearly she was able to focus and how much she got done when her mental load lightened.