Why Are Smart People Some of the Most Gullible People Around?

Former DISCOVER editor Paul Hoffman consults with the hotheaded naked ice borer to find out why our species has such a consistent tendency to be fooled. 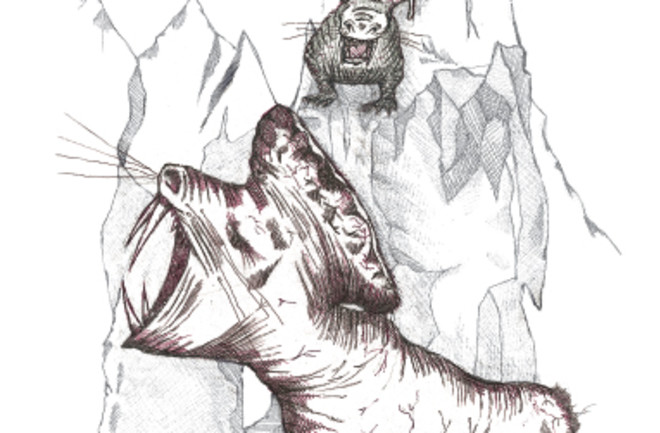 I am a fanatical woodpusher, and I’ve devoted a staggering number of hours not just to playing chess but also to reading and writing about the game. A few months ago I stumbled on a curious report on ChessBase.com that the 19-year-old Norwegian phenom Magnus Carlsen, currently ranked No. 1 in the world, had recently been found to be related to Matt Damon. The actor’s mother had seen a picture of Carlsen and noted the physical resemblance to her son, 20 years his senior. A little genealogical investigation proved that the two men were second cousins who had never met. ChessBase posted a series of paired photographs of Carlsen and Damon in which their facial features and gestures were remarkably similar. The report concluded by saying that Damon had invited Carlsen “to visit him on the set of his next film about a shogi champion [shogi being a Japanese version of chess] who inspires a nation to put aside its differences and unite in celebration of his sport.” I’m a fan of Carlsen’s, and I e-mailed the story to a few fellow chess nuts. The only problem was that the story wasn’t true—I hadn’t noticed the April 1 dateline.

My gullibility was particularly embarrassing because I myself have a history of perpetrating hoaxes. I was the editor in chief of DISCOVER when, in 1994, the magazine embarked on a five-year run of publishing a sham news article every April. I had gleefully followed the venerable BBC’s periodic science pranks—my two favorites were a televised report on the defeat of the destructive pasta weevil (accompanied by images of Swiss workers harvesting spaghetti from trees) and a radio interview with an astronomer who urged listeners to jump into the air to experience a once-in-a-lifetime diminution in gravity as Pluto passed behind Jupiter. I wondered if the British are particularly credulous (after all, they still believe in princesses and queens), or if hard-boiled Americans would also fall for fake science stories. DISCOVER was my laboratory, and as a result of a half-decade of rather unscientific experimentation, I can report that Americans are pretty gullible too.

Senior editor Tim Folger was enlisted to write four of the April Fool’s stories that appeared in the magazine. In 1996 he described an extraordinary new evanescent particle called the bigon, a bowling-ball-size object whose existence might account for ball lightning, migraines, collapsed soufflés, spontaneous human combustion, and earthquakes. The following year, Tim wrote about the discovery of Neanderthal musical instruments—a mastodon-tusk tuba and rhinoceros-bladder bagpipe—and speculated that the hominids’ love of oom-pah-pahing through the forest may have scared prey away, resulting in their starving themselves to extinction. In 1998, the final year of the ersatz stories, Tim described the ambitious plan of Justin Vorfun, the hot-tub-loving CEO of a Hollywood Hills engineering firm, to install 300 building-size bellows around Los Angeles to blow the city’s famously bad smog out to sea.

It was Tim's 1995 report, on Aprile Pazzo’s discovery of a strange little mammal called the hotheaded naked ice borer, that became the most celebrated hoax at DISCOVER. Packs of these hairless, molelike creatures, which lived in tunnels in the Antarctic ice shelf, were said to melt the ice below unsuspecting penguins with their red-hot heads and then devour the sinking birds with bites of their sharp incisors. Pazzo speculated that her discovery could explain the sudden disappearance of the polar explorer Philippe Poisson in 1837.

The article was quickly reprinted and widely distributed by newswires. Ripley’s Believe It or Not! reported it as true, as did The Unofficial X-Files Companion. DISCOVER received a record amount of mail from people who believed the story and from readers who wanted us to know that they got the joke (Aprile Pazzo is Italian for “April Fool”). A zoo asked for our help in acquiring one of the creatures for its collection. I remember replying that the animals could not be shipped because their heads would melt the packing crate—and that even if we could find a way to transport them, the zoo would need to feed them live penguins, and wouldn’t that be rather disturbing to the zoo’s younger visitors?

The hotheaded naked ice borer now has its own Wiki­pedia page and appears on lists of the greatest hoaxes of all time. Tim Folger, who has labored in the pages of this magazine to painstakingly unpack string theory and the extraordinary world of Stephen Hawking, fears that it is his fictitious account of the repulsive little carnivore for which he’ll be remembered. “It’s kind of pathetic,” Tim told me, “that this may be my writing legacy.”

All of our sham stories found their believers, despite what I thought were abundant red flags. The Neanderthal researcher, for example, was named Todkopf (“Deadhead”) and hailed from the nonexistent Hindenburg University (get it?—a school of hot air). But creationists trumpeted the ancient music story as further evidence that Neanderthals were just like us. (Creationist theology does not permit another human species; that would undermine our God-given uniqueness.)

As for the ice borers, many readers of the original report noted that the April 1995 issue of DISCOVER was peppered with true stories—about rats on Prozac, mini-mammoths, and buddy-system birds—whose authenticity might well be questioned. Indeed, the very image on the cover of the magazine could be suspect—a grotesque blowup of a false-colored micrograph of a 0.03-inch Microphthalmus, accompanied by the oversize headline “Exclusive Photos: Aliens on the Beach! The Unseen Creatures Beneath Our Feet.” (I apologize for the hyperbolic wording—my compensation was based on newsstand sales.) And the ice borer itself was just a fantastic twist on a hardly more believable animal, the Namibian naked mole rat, a nearly blind mammal that has a social structure like an ant’s. To fake a photo of an ice borer that accompanied the hoax story, the magazine’s art department Photoshopped a red-tinted trilobite onto the head of a naked mole rat.

I now feel a pang of guilt about the hoaxes. As a man of science, I was smugly delighted that creationists seized on the Neanderthal tuba but dismayed that zoologists and other scientists also believed our fakes. Magicians often say scientists make the best audience because they think they’re too smart and observant not to trust what they see with their own eyes. Ricky Jay, the sleight-of-hand master, told 60 minutes that “the ideal audience would be Nobel Prize winners....They often have an ego with them that says, ‘I am really smart so I can’t be fooled.’ No one is easier to fool.”

I told the magician Penn Jillette about the ice borers. “Smart people learn to believe things that are counterintuitive,” he said. “Black holes, string theory, germs, trips to the moon, radio waves—they’ve had practice believing crazy s--t.” Penn was right, of course. Is a bowling-ball-size fundamental particle any less plausible than 26-dimensional string theory? Or smog-clearing bellows any less harebrained than, say, BP’s plan to plug its oil geyser with golf balls? We live in interesting times. Modern physics is incomprehensible, and cowboy engineering schemes—private companies racing to get to the moon or to sequence our genomes cheaply—are commonplace and may be our salvation.

Science has always aimed to explain the world around us, and humanists used to portray scientific explanations as draining the joy and mystery from life. These days, though, scientific explanations often defy everyday experience. The fact that creationists are citing science to further their agenda is a sign that scientific discovery has become as marvelous and inspiring as any tale from religion.

Richard Dawkins says there is an evolutionary advantage in believing what authority figures tell us: Children would wander off into the woods if they didn’t heed their parents’ admonition to stay near their homes. Toddlers cannot understand how a stovetop could burn them, yet most of them follow their parents’ warning to stay away from the range (as well as believe whatever they are told about Santa Claus, the tooth fairy, and Dawkins’s favorite bugaboo, the Almighty).

I asked Stephen Greenspan, the author of Annals of Gullibility: Why We Get Duped and How to Avoid It, to explain why intelligent people accepted our April Fool’s stories. “People trust authority—and DISCOVER is an authority for science news—unless the authority says something too far-fetched,” he said. Our economy and all other social interactions are based on trust and would collapse if we all doubted one another, he added. In other words, a society of paranoids and cynics would not function as a society. It is sobering to realize that human beings blindly trust authority and that authority figures like Nobelists are the ones most easily duped.

When I learned that Greenspan, perhaps the world’s foremost scientific authority on gullibility, had put $400,000 of his own retirement savings into funds that invested with Bernie Madoff, I no longer felt so stupid believing that Matt Damon was starring in a film about shogi. Come to think of it, the plot of the purported movie sounded a lot like Invictus.

Paul Hoffman, editorial chairman of BigThink.com, is the author of King’s Gambit: A Son, a Father, and the World’s Most Dangerous Game.