A few days ago The New York Times published an article, Who Are We? New Dialogue on Mixed Race. Who are the multiracials? Because of the history of black-white relations in the United States, and Barack Obama's own background, the term is often framed so that that dimension is front &amp; center. But what do the numbers say? Census 2000 found that 2.4% of Americans selected more than one race; i.e., they identified as multiracial. The breakdowns were: 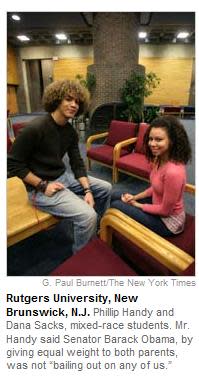 "Some Other Race" usually means Hispanic or Latino (nearly half of Hispanics or Latinos identify as white, but 2/5ths identify as Some Other Race). When it comes to how race is lived in America the fact that the major media is based out of the east coast has a distortionary affect on the discourse. Granted, The New York Times piece profiled a woman of mixed Chinese &amp; white heritage, but she was predictably tacked on after the primary focus on the new biracial America.P.S. Did you know that Herbert Hoover's Vice President, Charles Curtis, was about 1/4th to 1/2th Native American (depending on which source you trust) and spent some of his youth on a reservation?