Who Are History's Heroes And Villains? A World Opinion Survey

How do people in different cultures view history? Around the globe, who are regarded as the best and worst historical figures? A new survey out now inPLoS ONE reveals the patterns of world opinion:  “Heroes” and “Villains” of World History across Cultures.

The researchers, led by Katja Hanke of Germany and James H. Liu of New Zealand, polled 6,902 university students from 37 different countries. In an anonymous survey, the participants rated 40 historical figures on a seven point scale from ‘extremely negative’ to ‘extremely positive’.

How about the villains? Here, from worst to best, the most negative ratings were: Hitler, Osama bin Laden, Saddam Hussein, George W. Bush, Stalin, Mao Zedong, Lenin, Genghis Khan, Saladin and the Qin Emperor. However, the last three were not really seen as villains; their ratings were just middling.

Notice that George W. Bush was rated as worse than Stalin and Genghis Khan.

The authors suggest that “the impact of time” explains this. They say that while Stalin and Genghis were “responsible for innumerably more deaths”, Bush was more recent (the survey was done in 2008-2009).

How did responses vary in different countries? Interestingly, national opinions tended to agree regarding the heroes, but diverged when it came to the villains. For instance, the two figures on which nations disagree the most were Saddam and Osama bin Laden. They were both rated more positively (or less negatively) in Muslim countries.

People around the world tended to agree about who the heroes were, though, and the appeal of scientists was especially universal. Hanke, Liu et al. say that

At least among university students, the pursuit of scientific excellence appears to be evaluated in a pan-cultural manner: that is, positively across all sampled cultures.

It’s worth noting, however, that the only scientists on the list were physicists. I wonder how Charles Darwin would have fared?

Next, using a method called Latent Profile Analysis (LPA), the authors identified four ‘profiles’ among the participants. The average ratings of the historical figures are broken down by type as follows. 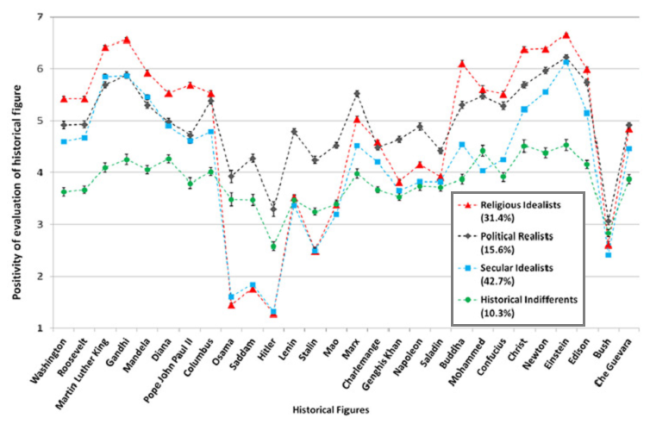 Essentially, “Religious idealists” and “Secular Idealists” are defined by strongly negative ratings of Osama, Saddam, and Hitler. “Religious Idealists” and “Political Realists” have positive views of religious leaders such as Mohammed, Buddha and Jesus. “Political realists” are also fond of Communist leaders like Marx and Lenin. “Historical Indifferents” had no strong feelings about anyone, except that they disliked Hitler and George W. Bush. Actually, Bush was the only figure that all four groups dislike.

Here’s how many people subscribe to these different schools of thought in different countries: 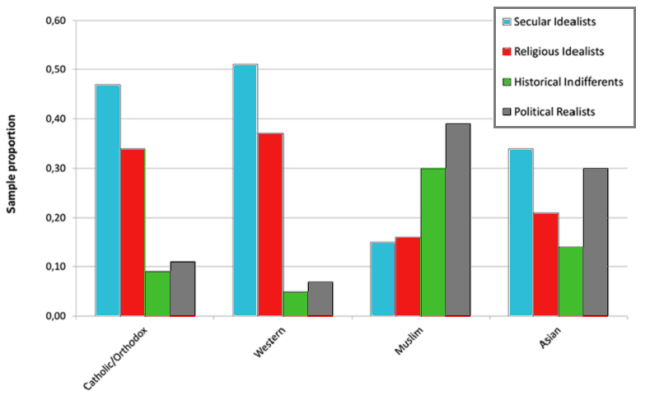 Countries classed as “Catholic/Orthodox Christian” and “Western” proved very similar, in that most people were classed as either Secular Idealists or Religious Idealists. This means that students in Europe, North America, and South America tend to agree on which historical figures are good and bad.

However, in Asia, opinion was much more mixed. In the Muslim world, strikingly, the most common profile was Political Realism. This is a rather surprising result, given that Political Realism rates the atheist Karl Marx higher than  Mohammed (!). On the face of it, this is hard to fathom.

Citizens of Western countries [must] understand that the overwhelming support for “Historical Idealism” prevalent in their countries is not universal, and cannot be expected to be transplanted without growing pains to Muslim countries. Rather, we should anticipate a long trajectory of democratization in these countries rather than an unbroken chain of immediate successes…

But this is reading a lot into one survey. The poll was not intended to sample the national populations, as it only included students. In fact it wasn’t even representative of all students, as the authors say that they focussed on social science students, while “specialists majoring in history were avoided.”

So while this is a fascinating set of results (and there’s lots more detail in the paper that I haven’t covered), I’m not sure we can use it as a guide to the future of democracy.