When pain is pleasant 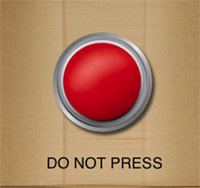 Ever prodded at an injury despite the fact you know it will hurt? Ever cook an incredibly spicy dish even though you know your digestive tract will suffer for it? If the answers are yes, you’re not alone. Pain is ostensibly a negative thing but we’re often drawn to it. Why? According to Marta Andreatta from the University of Wurzburg, it’s a question of timing. After we experience pain, the lack of it is a relief. Andreatta thinks that if something happens during this pleasurable window immediately after a burst of pain, we come to associate it with the positive experience of pain relief rather than the negative feeling of the pain itself. The catch is that we don’t realise this has happened. We believe that the event, which occurred so closely to a flash of pain, must be a negative one. But our reflexes betray us. Andreatta’s work builds on previous research with flies and mice. If flies smell a distinctive aroma just before feeling an electric shock, they’ll learn to avoid that smell. However, if the smell is released immediately after the shock, they’re actually drawn to it. Rather than danger, the smell was linked with safety. The same trick works in mice. But what about humans? To find out, Andreatta recruited 101 volunteers and split them into three groups, all of whom saw coloured shapes. The first group received a moderately painful electric shock six seconds before the shapes flashed up. The second group were shocked eight seconds after the shapes appeared and the third group were shocked fourteen seconds afterwards. This last time gap should have been long enough to stop the recruits from forming a link between shock and shape. Later, everyone saw the shapes without any accompanying shocks. When asked to rate their feelings, most people felt negatively towards the shapes, particularly those who had been shocked just afterwards. That seems fairly predictable, but Andreatta wanted to find out what they really thought. To do that, she flashed the shapes up again, paired them with a loud burst of noise, and measured how strongly they blinked in response. This is called the startle reflex; it’s an automatic response to fear or danger, and it’s very hard to fake. The strength of the blink reflects how fearful the recruits were feeling. 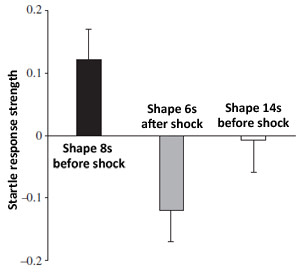 Sure enough, those who saw the shapes before they were electrocuted showed a stronger startle reflex than usual. To them, the images meant that something bad was about to happen so when the noise went off, they reacted particularly strongly. But the recruits who were shocked before the shapes appeared actually showed a weaker startle reflex. It seems that despite their ratings, the lesson they had taken away was that the presence of the shapes was a positive omen. Other studies have found that rewarding experiences can soothe the startle reflex – in flies, a sugary liquid works and in humans, news of a monetary windfall will do the trick. Andreatta thinks that some of her volunteers behaved in the same way because they had come to associate the coloured shapes with the rewarding feeling of pain relief. For the moment, despite my introductory paragraph, it’s not immediately obvious how this relates to our daily lives. Andreatta suggests that the pleasant after-effects of otherwise scary or painful affairs might explain why we’re so drawn to dangerous or terrifying pursuits like rollercoaster rides or bungee jumping. More importantly, it could affect the way we think about mental disorders like addiction or anxiety. Reference: