When Cleaning fMRI Data is a Nuisance

A flaw in data processing could be leading to biases in fMRI brain functional connectivity patterns, according to a new report: The Nuisance of Nuisance Regression. Ironically, two high-profile recent papers about bias are amongst the victims. The new paper, from Pittsburgh's Michael Hallquist and colleagues, is essentially about a case where 2 + 2 = 3. Functional connectivity fMRI (fcMRI) is a powerful technique which can reveal the pattern of interactions between brain areas. However, raw fcMRI data is full of various kinds of artefacts caused by things such as breathing and head movement. To deal with these, two clean-up techniques are commonly used: bandpass filtering, and nuisance regression. Both of these are designed to get rid of unwanted components. Filtering the data removes signals that change either so quickly, or so slowly, that they're unlikely to be real neural activity, and can be assumed to be noise. No more noise. Nuisance regression is more targeted; it takes some known measures of the 'nuisance' variables, for instance, changes in head position, and then it removes any rsfMRI signals that are correlated with them. No more nuisances. These are both good tools. The problem, Hallquist et al say, is that they can interfere with each other, so the benefits actually cancel out. 2 + 2 = 3. But not always. It's all about the order. If you bandpass first, and then do nuisance regression ("BpReg"), the second step can actually end up putting noise back into the data. The trouble is that if you filter the fcMRI data but not the nuisance variables (which is what many people have been doing), it's invalid to then regress them together. The opposite order, doing nuisance regression first then bandpass filtering ("RegBp"), is not subject to the same problem. Best of all is to combine both approaches in a single simultaneous step. But the main lesson is to avoid BgReg. Most interestingly, Hallquist et al point out that a number of recent papers that warned of the dangers of head movement in rsfMRI, used BgReg. These include a Neuroskeptic favorite that has led to concern in autism research circles. These papers warned that standard data cleaning doesn't get rid of motion artefacts. Hallquist et al say that this is true, but only for BpReg. 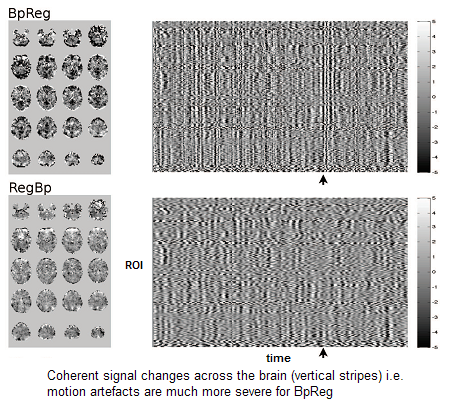 Many rsfMRI researchers do use BpReg, but not all; I suspect it's just luck which has determined who's used which order. The lesson of this paper is clear: don't use BpReg, and if you don't, you can breathe a small sigh of relief. Here at Neuroskeptic we've twiceseen how misapplied data 'filtering' can actually introduce biases.