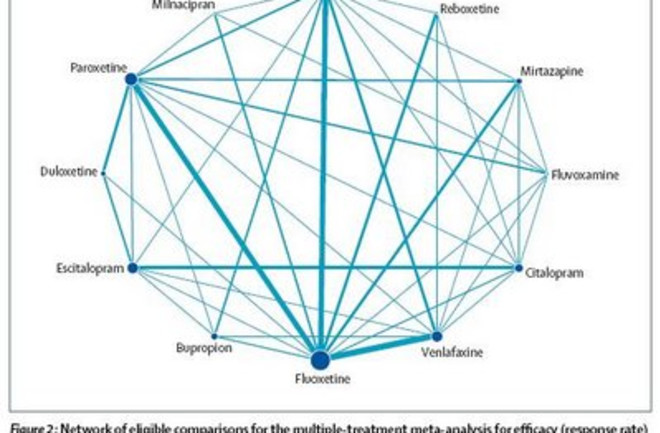 It’s escitalopram (Lexapro aka Cipralex) – hurrah! That is if you believe a meta-analysis just published in The Lancet. Should you believe it? The Lancet‘s a highly-regarded journal. However, this paper certainly bears a close reading.

The question of whether any antidepressant works “better” than any other is an old one. There are many who hold that all antidepressants are pretty much equal. Then again, there are people who deny that they really work at all. If you think about it, it would be pretty odd if tianeptine, a drug which enhances the reuptake of serotonin, was exactly as good as tranylcypromine, which blocks the breakdown of serotonin, noradrenaline and dopamine. They work in completely different ways, so one of them probably ought to work better. Every psychiatrist I’ve spoken to believes that some drugs are better than others – but they rarely agree on which ones are better. So there’s room for more knowledge here.

The Lancet paper tries to establish the comparative efficacy and tolerability of 12 “newer” antidepressants. This includes SSRIs like fluoxetine (Prozac) and citalopram, as well as the noradrenaline reuptake inhibitor reboxetine (Edronax), dual-action venlafaxine (Effexor), and a few others. However, it doesn’t include pre-1990 drugs like tricyclics and MAOis – sometimes regarded as a bit more powerful (but much less safe) than any newer drugs.

In other words, escitalopram has the mildest side effects and is also very effective; mirtazepine is slightly more effective, but the side effects are considerably worse. Sertraline offers a good combination of tolerability and power, but escitalopram is even better. (Sertraline is much cheaper though, because the patent has expired.) Hurrah. Reboxetine, on the other hand, is declared total rubbish, being the least effective and also the worst tolerated of the 12. Oh dear.

But how did they reach these bold conclusions? They did a meta-analysis of 117 randomized controlled trials directly comparing one antidepressant against another (“head-to-head comparitor trials”). There was plenty of data – in total the trials covered 25,928 people. But the data was patchy. There are plenty of trials comparing fluoxetine vs. venlafaxine, but there are very few comparing, say, venlafaxine with citalopram. The diagram at the top shows the number of each type of comparison; some drugs were almost never compared with anything. Why? Generally, because these trials are run by drug companies comparing their newest product with an established competitor, in an attempt to show that theirs is better.

In an attempt to get around this problem, the authors did a “multiple-treatments meta-analysis”; essentially, this involves indirectly comparing drug A and drug B, by looking at direct comparisons of both to drug C. If A is much better than C, and B is a little better than C, you can work out that A is better than B.

Of course, this involves a lot of assumptions. And in the case where you have 12 drugs, not just 3, it becomes very very complicated. The methods section offers little insight into exactly what the authors did:

We did a random-effects model within a Bayesian framework using Markov chain Monte Carlo methods in WinBUGS (MRC Biostatistics Unit, Cambridge, UK). We modelled the binary outcomes in every treatment group of every study, and specified the relations among the odds ratios (ORs) across studies making diff erent comparisons. This method combines direct and indirect evidence for any given pair of treatments. We used p values less than 0·05 and 95% CIs (according to whether the CI included the null value) to assess signifi cance, and looked at a plausible range for the magnitude of the population difference. We also assessed the probability that each antidepressant drug was the most effi cacious regimen, the second best, the third best, and so on, by calculating the OR for each drug compared with an arbitrary common control group, and counting the proportion of iterations of the Markov chain in which each drug had the highest OR, the second highest, and so on. We ranked treatments in terms of acceptability with the same methods.

I don’t know what that means, in practice. I know vaguely what it means in theory but in any kind of data-crunching like this, there are always things that can go wrong and difficult decisions to be made. So the analysis might have been completely reasonable – but we don’t know. The authors deny that any drug company funded the study. I vaguely know some of them, and I don’t believe for a second that they deliberately fixed the results in favor of escitalopram. But readers of the paper have no way of knowing whether their analysis method was reliable or not.

The more basic problem with this kind of thing is that it doesn’t address the question of whether some drugs are better for some people. Anecdotal evidence strongly suggests that some are (“Sertraline made me feel terrible, but citalopram helped” – you hear this kind of thing a lot when talking about antidepressants) but there’s not much hard evidence. For patients and doctors, though, it would be very useful to know which drug to prescribe to a certain person. The answer will not always be escitalopram.

Reboxetine may not be good for everyone, but for some people, it might be all they need. For example, given that reboxetine tends to have a stimulant-like “energizing” effect and to wake you up, you might assume that it would be good for someone whose main depression symptom was fatigue & sleepiness. You’d have to assume that, though, because there’s no scientific evidence.

Finally, just for a sense of perspective, here’s what happened in a couple of other recent antidepressant beauty contests. As you can see, they don’t really agree on much…