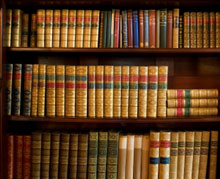 Eric Schwitzgebel, an associate professor of philosophy at the University of California at Riverside, has written a paper, "Do Ethicists Steal More Books?" seeking to answer the timeless question of whether ethicists (i.e., people devoted to the study and philosophy of ethical codes) are concurrently more likely to hold themselves to higher standards of behavior (i.e., practice what they preach). His finding? Not so much. In his study, Schwitzgebel examined the number of ethics books missing from academic libraries, under the assumptions that a missing library book means that someone either lost or stole it, and that academic books on ethics are generally checked out by ethicists. After compiling a list of titles, he cross-checked it with the records of 13 U.S. and 19 British academic library systems, including the six University of California libraries, as well as those at Harvard, Cornell, Stanford, and Michigan. Each school's records reflected the same time period: October through December, so during the fall session. He found that the ethics titles were about 25 percent more likely to be missing than other philosophy books published in the same time period. The second time around, Schwitzgebel narrowed the list to "relatively obscure books most likely to be borrowed exclusively by professional ethicists and advanced students of ethics" and performed the same test. This time around, he measured two separate time periods: late December through early January, when school was not in session, and late February through early March, when school was in session. While there was a slight difference between the two time spans, he nonetheless found that the older books had a whopping 50 percent greater likelihood of being gone than other old and obscure philosophy books. In the future, Schwitzgebel hopes to also investigate whether existentialists are more likely to buy life insurance. This post has been appended.