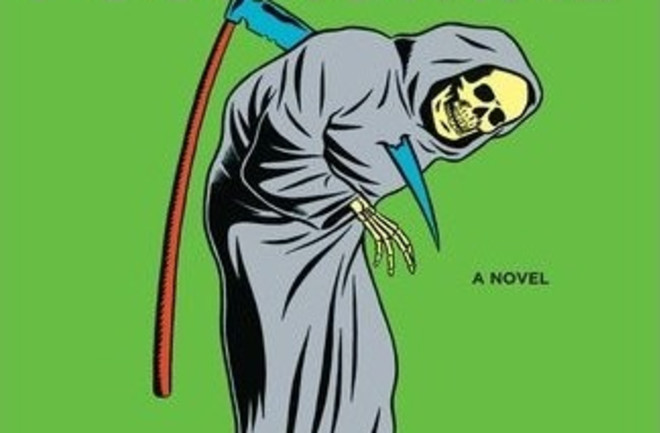 The cover of The Postmortal is one of the coolest images I've seen in a long time. Death impaled by his own scythe – be not proud, indeed.

The idea behind Drew Magary's great new book is simple: aging, as it turns out, is caused by one gene. Shut that gene off and you stop aging; accidents and disease are still a problem, but you've cured death by natural causes. Now compound that discovery with the fact that any person who gets the Cure simply stops aging. People don't become younger, they just don't get older, frozen at their "Cure age." What happens next?

In an effort to find out, Magary takes us through the life of John Farrell, a New York lawyer who gets the Cure for aging at the age of 29 in the year 2019. From that point on, things go rather poorly for John and the rest of humanity. As one might expect, curing aging doesn't cure social ills, over-population, ennui, or a host of other human hangups. Mark Frauenfelder has an excellent synopsis of the book over at boingboing.net, and I share his opinions about the book's bleak tone and high quality.

Magary's argument through the text is essentially this: death creates meaning. Not mortality, but guaranteed natural death due to aging. The idea that no matter what you do, how you live your life, the concept that you will be born, mature, grow old, and die creates human meaning. Magary has a point: from the riddle of the Sphinx to Tyler Durden to the final books of Harry Potter, aging and death seem to be at the epicenter of human thought. I don't deny him that at any moment any one of us could meet a tragic end. Life is precious in part because it is not meant to last.

But here is where I struggle. The Postmortal is not about a post-mortal society, it is about a post-aging society. Lots and lots and lots of people die in Magary's vision. In fact, he seems to argue that in the absence of death, people will not only seek death but will create circumstances that create death and thereby, create meaning. It is only when Farrell's life is most in peril that he finds purpose in existence. But Farrell is never immortal, no one is. So my question is: is the process of aging as meaningful as the condition of being mortal?

This question vexed me, because I know a great many people who have aged with grace. They wear wizened white beards or crinkled smiles that highlight eyes behind inch-thick spectacles. Some people are just awesome at being old. They have custom canes and smoke ivory pipes and say saucy things that only they can get away with. To reference Harry Potter again, Voldemort, Mr.Flees-From-Death himself, is contrasted with Albus Dumbledore and Minerva McGonagall, both of whom are walking idealizations of what the aging process should look like.

But that's just it, isn't it? They are idealizations.

Reality presents a grimmer picture. Alzheimer's, Parkinson's, and a laundry list of other late-onset diseases savage the body just enough that modern medicine can step in to keep the heart beating and the organs limping along while the mind deteriorates to the point of nothingness. Aging in the modern era is about slow unstoppable loss - of hearing, of memory, of mobility, of continence, of dignity. What part of that process creates meaning in our lives? Or is it that to get the benefits of death, we must past through the fires of desperate and futile attempts to prevent it?

Magary's vision is encapsulated by a character who appears at the end of the book. She is a prostitute who wants to die. She had her age frozen at 18 and, as a result, is seen as a perpetual teen mentally. That is, her additional decades on the planet have done nothing to shape her perspective, beyond making her more cynical. And so it is with everyone else on post-Cure Earth. In Magary's mind, the stop of physical aging is the stop of maturation.

In this sense, I suspect Magary's indictment is not of those like Aubrey de Grey who seek the end of aging, but of those who resist maturation. Magary's values are essentially conservative. It isn't until the main character is about to die that he realizes what matters: namely, his son (out of wedlock), getting married, and protecting an unborn life. Life in the post-aging world is plagued by those who devalue marriage, childbearing, and religion. Yup, even the secular "Church of Man" is shown to be the "right" answer by the end of the novel. While I don't deny that these are all valuable pursuits (substituting religion for the broader philosophy of the examined life) I do deny that they would be annihilated by agelessness.

Human beings do not settle down because they age anymore than people have quarter-life or midlife or three-quarter life crises because they age. People are content or discontent based on the life they are currently living. I find it fascinating that Dumbledore and Ms. McGonagall are both single as they approach the sunset of life. Both are examples of doing precisely what Magary critiques, pursuing one's passions while putting commitment and reproduction on hold. As it so happens, one can live a life of value to humanity, one can, in fact, contribute to the greater good, without maturing and aging as he prescribes. Only if Dumbledore and McGonagall didn't have to age, one could argue they could have become master magicians and raised a family, had they so chosen. Why aging creates more options in Magary's mind, I'm not quite sure.

Death, I don't deny, creates meaning. Finitude and limits give us something against which to define our existence. But my meaning is not created by the knowledge that I will die at the ripe old age of 98 but simply by the knowledge that I will die. Maybe I'll get lucky and live to be 500 only to be obliterated during an alien invasion. Or maybe I have a tumor right now and will be gone before this time next year. I don't know. But knowing when we will die, be it young or old, has never been what created meaning. And gray hairs and crows feet have never been the cause of wisdom, merely the first signs of the very high cost of living long enough to acquire it.

Personally, I like the idea of having 100 years of wisdom and experience in the youthful body of a 29 year old. But maybe I'm not old enough to know better yet.