It’s not about shyness, it’s about where you get your energy from. 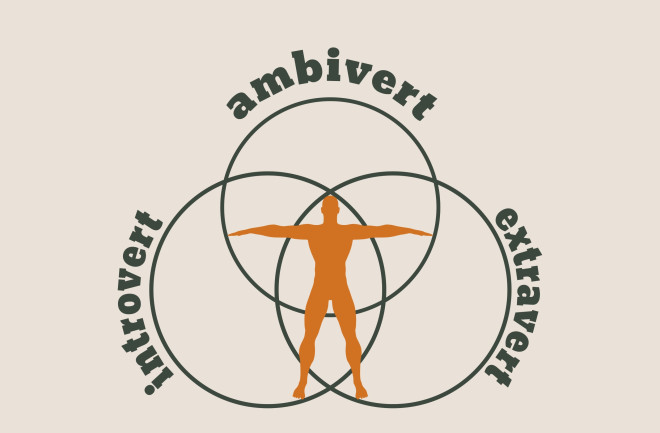 Whether you’re an introvert or an extrovert doesn’t say much about how outgoing you are – that’s a common misconception. “It’s definitely not about the shy versus confident idea,” explains Kyla Flanagan, an education researcher at the University of Calgary, Alberta, whose work has looked at how to ensure teaching methods are optimized for both introverted and extroverted students. “Instead, you should think about where you get your energy from – groups or solitude.”

For example, someone who needs time to recuperate alone after a gathering is most likely an introvert, whether they enjoyed the party or not. Conversely, someone who leaves a get-together buoyant and enthused is probably an extrovert. “An introvert spends energy in a social group doing small talk whereas an extrovert thrives on that,” says Arnie Kozak, a psychologist and assistant professor of psychiatry at the University of Vermont Larner College of Medicine. “The pandemic has favored introverts as a result.”

Which One Are You?

Differences also exist when it comes to problem solving. Extroverts usually find it helpful to vocalize problems and are perhaps more likely ask for advice from others, whereas an introvert would tend to visualize or write out potential solutions. Additionally, extroverts are typically good at expressing themselves verbally and can do so off-the-cuff. Introverts meanwhile take more time to collect their thoughts and deliver them purposefully. That can have a knock-on effect when it comes to meetings – extroverts can end up dominating the conversation. “Sometimes extroverts need to be reminded to let others speak whereas introverts need to be prompted to speak,” says Flanagan.

It’s worth noting that you don’t have to be one or the other, introversion and extroversion happen on something of a spectrum and a new term has emerged for those who find themselves somewhere in the middle: ambivert. Scientists are unsure which of the three behavior types are the most common, but most personality traits are usually distributed “normally” with the majority of people falling somewhere in the middle and a minority of people scattered towards the extremes. However, this distribution may vary depending on geography and culture. “Scandinavia is purported to be more introvert and the U.S. more extrovert,” says Kozak. “But it’s difficult to measure and tests are not without their biases"

Much of the current research on the differences between introverts and extroverts is carried out by teachers and pedagogy experts such as Flanagan and that’s because there’s been a big push towards group learning in recent years. “There are tons of evidence that learning goes up on average when students are actively involved in constructing knowledge with their peers in groups,” says Flanagan. “We really need to reconcile this with the fact that introverts may hate this teaching method.”

Indeed, there’s plenty of evidence to suggest that introverts don’t do as well in group learning sessions when compared to their more extroverted classmates. In a bid to make sure introverted students aren’t left behind by the group learning trend, Flanagan and her colleague, Heather Addy, redesigned the lesson structure for 266 biology undergraduate students between 2015 and 2016. While they kept group learning as a major component of in-class learning, they also ensured that students needed to conduct independent study alone in order to be prepared for the lectures. “That way introverts can still think in peace in their own time and then everyone comes together and works collaboratively in the classroom. It balances with the need for collaboration and teamwork with making sure both introverts and extroverts thrive.”

Before the new lesson structure was applied, each student took an online test to determine whether they were introverts, ambiverts or extroverts. After completing the biology course, each student was asked whether they were satisfied and if felt they’d gained much from the course in a survey. After crunching the numbers, Flanagan and Addy found no evidence that introverts were disadvantaged. Introverts, ambiverts and extroverts achieved comparable grades and reported similar attitudes towards the course in general.

So, while introverts and extroverts may learn differently, Flanagan’s results show that both types of people are equally capable of achievement, although it does suggest that people in charge of designing curriculums and workplaces need consider both types of people.