A multidisciplinary project gives a science writer a new brain. 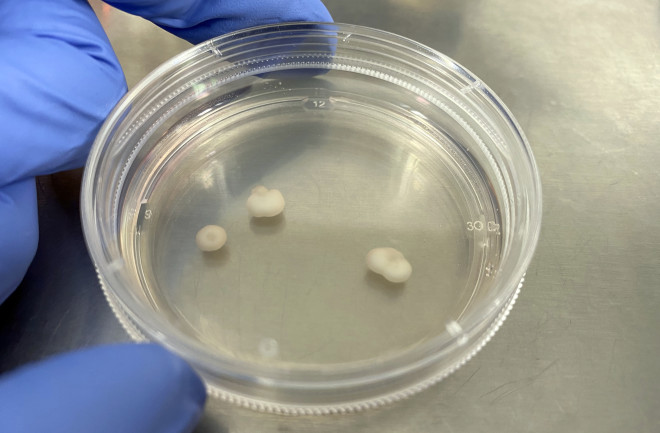 This story appeared in the June 2020 issue as "Out of His Mind." Subscribe to Discover magazine for more stories like this.

It isn’t every day that writer Philip Ball is asked to contribute to scientific experiments — typically, he’s reporting on them instead. But in 2015, scientists from a London-based project called Created Out of Mind asked Ball and a few other creatives if they’d participate in their work and then reflect on the experience. He agreed.

Ball first gave a sample, made up of cells from his skin, which was reprogrammed into stem cells that were subsequently grown into a brain organoid — or, as the research team called it, a miniature “brain in a dish.” These futuristic-sounding specimens aren’t literal brains, and they don’t look it, either. The round, cream-colored clusters of neurons simply resemble little blobs. They’re not conscious. But they can be studied to better understand brain development — such as where and when certain proteins misfold, which can signal whether a person will develop dementia.

This stained microscope image shows cells growing in a cross-section of a brain organoid, with neurons visible in red. (Credit: Chris Lovejoy and Selina Wray)

The researchers then asked Ball to reflect on his experience through writing. What started as a few blogs for Created Out of Mind eventually bloomed into a book, How to Grow a Human. Here, Ball recounts his time spent with his mini brain, and how the process gave him new insight into the future of lab-grown life.

I’d pop into the lab from time to time and see how things were going. At one point, I stopped by and one of the researchers told me that the organoids weren’t looking great — for some reason, they weren’t growing as they thought they might. We weren’t sure quite how they were going to turn out, and in the end many of them died before they could fully form.

But one day, out of the blue, one of the project leaders dropped me an email with photos and said, “Look, here’s your mini brain.” And there it was ... I wish there was some drama to it, but the researchers were pretty casual about it because they grow these things all the time. And I wish I could say that I remember thinking, “Oh my God, this is my second brain,” but I think I was more relieved than anything that it actually grew into an organoid. The fact that they actually got one that had these really clear, discernible structures in it was pretty remarkable. If anything, I felt a little bit proud of myself that we actually created something in the end.

For me, one of the really interesting things I gleaned from the project was that the stuff we are made from is incredibly versatile. The technology of transforming cells from virtually any other tissue in the body is relatively new, and it’s leading to all sorts of directions in medicine and research. I was fascinated to see firsthand what extraordinary things cells — even mature, adult cells — are capable of.

More From Discover
Health
5 Mysterious Facts About Sleep Paralysis
The Sciences
Can Humans (Briefly) Survive Decapitation?
Mind
How Fonts Affect Learning and Memory
Mind
Words Seem to Lose Their Meaning When We Repeat Them Over and Over. Why?
Health
The Seasons Are Changing and So Is Your Brain
Mind
The 10-Percent-of-Your-Brain Myth That Just Won’t Die
Recommendations From Our Store
My Science ShopDiscover STEM Kits
My Science ShopDiscover 2022 Calendar
My Science ShopStrange Science
My Science ShopElements Flashcards
Shop Now
Stay Curious
Join
Our List