The other day I was in a discussion about what "science" is. I've written about this before but this debate got me thinking about it again and I thought I'd set out what I think in more detail. I wasn't sure how best to structure this so I'm going to start with my main claim, followed by a Q and A bit. The Q's are not intended to be straw-men or caricatures, they're questions I've asked myself in the course of thinking about this. My Claim: "Science" is just the process of looking at the world and thinking about the evidence in an effort to understand it. It's not a special form of knowledge, scientists don't use a special 'scientific method' - scientists just look and think about things. They may use special equipment and techniques, but in essence it's no different to what we all do every day. As such it makes no sense to talk about the 'limits of science' or 'what science can't tell us', unless by that we mean the limits of human knowledge itself, because science just is knowledge. Q: "But if science were just observation, everyone would be a scientist and it becomes meaningless." - No: for the same reason that not everyone is a poet, even though anyone can write a poem. Science is observation informed by previous scientific findings i.e. it is expert observation. Anyone can, say, look at the stars but this doesn't make them an astronomer. Astronomy is in essence just looking at the stars and thinking about them - in a broad sense - but to contribute to astronomy, you first need to know the relevant background, which few except astronomers do. Likewise, anyone can write a poem, but few of us can make a living out of it. Q:

"OK, but still, if science is just observation, then all forms of knowledge are science."

- This is a tricky one, but the answer is crucial to understanding my point. A few hundred years ago, the word "science" in English did indeed just mean "knowledge". However, more recently, it has come to mean a particular subset of knowledge: roughly, it today includes physics + chemistry + biology. Maybe some others. We lump these three (or more) things together and call the lump "science". But this lump is more or less arbitrary. Physics + chemistry + biology don't share a special essence, which sets them apart from other kinds of knowledge (other 'sciences' in the older sense.) So I'm not saying that all knowledge is "science" in the modern sense. The modern word "science" only includes a limited portion of knowledge. But I am saying that the rest of knowledge is essentially no different fromscience, because "science" is just an arbitrary subset of knowledge. Here's a picture of what I mean: 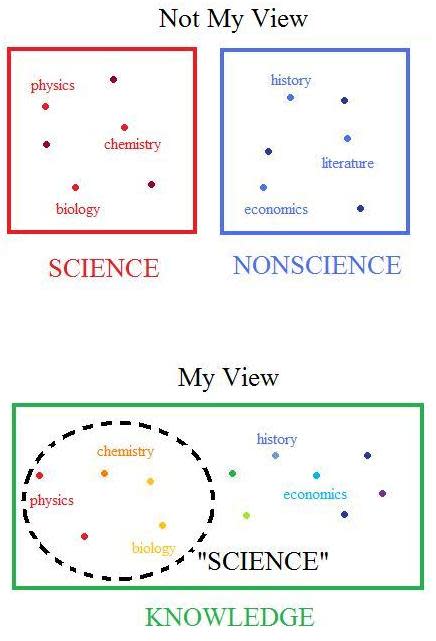 Or here's an analogy. The color spectrum has infinite different shades. We conventionally divide it up into "red", "orange", "yellow" etc. and that's fine for most purposes. But there is no essential difference between "orange" and "yellow" and no clear dividing line: they are just collections of shades. Science is a colour of knowledge. It's not a true kind. Q: "But if the difference between science and knowledge is arbitrary, are you saying that The Scientific Method is the only way to knowledge?" Not at all. I don't think 'The Scientific Method' exists. This follows from the fact that "science" is an arbitrary lump. Scientists are a diverse bunch and they use many different methods. Theoretical physicists, for example, use methods which are very close to those of mathematicians - who are not 'scientists' by most definitions. Zoologists use others, and you can get by in (most) of zoology without knowing any math at all. And so on. In fact, there's almost as much difference between branches of "the same science" as there is between sciences. Just like "science", "biology" is a lump of diverse things, although not quite as arbitrary a lump. Outside science, people use all kinds of methods as well. Historians have their set of methods, economists have others, all tailored to the particular demands of the case. That's exactly how it should be - all knowledge comes from observation and, to observe different things, you need different methods. There are many different kinds of facts, but a fact is a fact, whether it's a scientific fact, a historical fact, or just an everyday fact. "Shakespear wrote Hamlet" is just as true as "The earth orbits the sun" is just as true as "It's raining" (if it is, in fact, raining.) The facts of history are just as true as the facts of biology. But there is a grain of truth in the question here: I am saying that observation is the only way to knowledge. Q: "That's very simplistic. Are you saying that we can only know what we can see and measure?" - No because I'm using "observe" in the broadest sense here, to include things like noticing, sensing, feeling, seeing, hearing, being told that, reading about... You observe that it's raining: maybe you look out the window, maybe you hear the rain on the roof, maybe someone comes in from outside dripping wet. You observe that you feel hungry. You observe that Obama is president (even if you've never actually seen him) by watching the news. Etc. "Observe" is in many cases an awkward word and I'm not saying we should use it in all those cases. My point is that these are all ways of finding stuff out about the world. In that broad sense, I think all knowledge comes from observation - although maybe indirectly, through thinking about observations; thoughtless observation is almost as unhelpful as purely abstract speculation. Of course, it's easier said than done: very often it's not clear what we've observed (is it real or some kind of trick, mistake, illusion?), what it means, whether it matters, or even what the question is. This is why there's always room for debate, controversy and doubt, at least at first, before all the observations have been made. Q: "But what you're saying is merely trite and obvious: 'science is based on observation' 'there is no one single scientific method', well, duh!" - From a certain perspective, they are obvious, but if you think so, then you ought to agree with everything else I've written here. They're all connected, you can't take some and leave the rest.