What Is My Cat Thinking?

Will we ever know what animals think about? Do they 'think' at all? 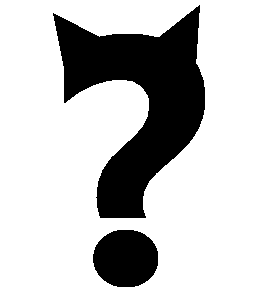 I've been wondering lately about the behaviour of my cat. He's taken to sitting or lying by the window, staring out into the front garden. He does this for hours on end, as far as I can tell; when he's not sleeping or eating, it's the main thing he does. He started doing this a few months ago. But what is he looking at? The best guess I have is that he's looking out for the neighbour's cat, who occasionally comes through the hedge and into my cat's turf - he's even tried to bust in through the cat-flap a couple of times. My cat's deeply offended by these incursions and the invader always emerges in the front garden. So it seems plausible that my cat could be watching out for him. ...but does the fact that it 'seems plausible' - to my, human, way of thinking - matter? Or am I just anthropomorphizing here, trying to explain my cat's behaviour as if it were a human behaviour? Maybe he's not looking at, or out for, anything, or at least nothing that I could understand. Maybe he just likes the view. Now as a neuroscientist, this makes me think: could his brain hold the answer? Suppose we could measure his neural activity when he's confronted with the neighbour's cat. And then suppose we observed that the same pattern of brain activity was present (perhaps less strongly) when he's looking out of that window. Would that activity be evidence that he was, indeed, looking for that cat? Likewise, if we didn't find any such reactivation, would that suggest he wasn't? That's a very interesting question, I feel. The skeptical position would be that, no, it doesn't tell us anything about his 'state of mind': his brain activity wouldn't enlighten us as to the contents of his consciousness, if indeed he's conscious at all. After all, the skeptic could say, we have no idea how neural firing relates to consciousness in humans, let alone animals. Yet although I can't dispute that logic, I do think that to find neighbours-cat-esque activity in my cat's brain as he stares out that window would surely mean something...?