What Is Conversational Intelligence and Why Does It Matter?

Our communication skills are influenced by both biological factors like genetics and the environment we're raised in. We also develop social biases during first impressions (but it's possible to overcome them). 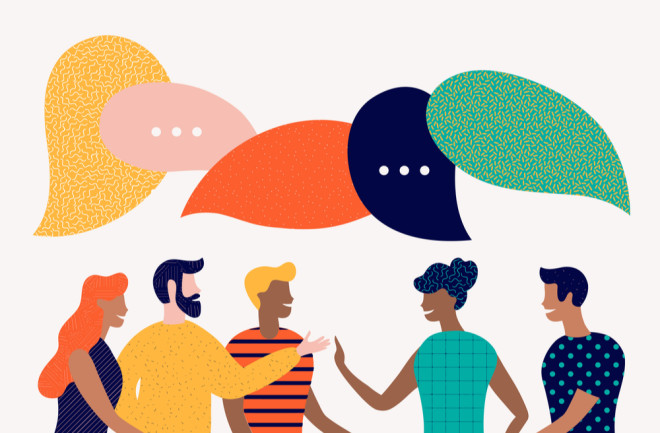 While plenty of things set humans apart from the rest of the animal kingdom, perhaps none are more innovative than language: We build our social world through conversations.

The late Judith E. Glaser, an organizational anthropologist, called the hardwired and learned ability to connect, engage, and navigate with others 'conversational  intelligence.’ When we learn to communicate in ways that create a shared concept of reality, we can enhance our relationships, health and overall wellbeing.

Is Language a Human Universal?

Language enables us to convey humor and love, risk and reward, or any complex idea. We can do this because features of human language are universal.

Babies even begin learning language in the womb, and infants are ready to learn any language after birth. Patricia Kuhl — a researcher who specializes in early language and brain development — has described how, regardless of what culture you come from, a child’s development initially follows a universal pattern of language acquisition.

Then at 10 months of age, infants can still discriminate sounds from a foreign language. By the age of one, infants specialize in native-language distinctions.

These language acquisition skills compose the origins of conversational intelligence, and they are likely based both in biology (related to genetics, for example) and one's environment.

The 30-Million Word Gap and Beyond

In the early 1990s, psychologists Betty Hart and Todd R. Risley observed 42 socioeconomically diverse American families over the course of two-and-a-half years. They aimed to learn more about how parent-child interactions shape language development. They concluded that 86 to 98 percent of the words recorded in a child’s vocabulary consisted of words from their parent’s vocabularies.

Their findings revealed several similarities between parent-child speech patterns and word usage. The pair wrote that, “When we listened to the children, we seemed to hear their parents speaking.”

The word gap theory gained popularity for its implications on child development, but it also left researchers to wonder if the word gap rendered measurable differences in the brain.

Over the past three years, researchers have conducted neuroimaging studies that contributed to the conversation surrounding this significant word gap between classes. Each study utilized LENA (Language Environment Analysis System), a recording technology that enables researchers to measure core language metrics like adult word count, conversational turns and child vocalizations.

In 2018, researchers from Harvard and MIT analyzed language experience from home recordings of parent-child interactions with LENA. A group of 4- to 6- year-olds then participated in a functional MRI story-listening task to gauge neural language processing. The results replicated prior behavioral findings: Higher socioeconomic status was linked to greater language experience and verbal abilities.

However, the researchers also found that the most significant impact on neural language processing (i.e. greater activation of Broca’s area) came from the number of conversational turns between children and parents — not the quantity of words that a child listened to.

It was also found that taking turns in conversation can have positive effects across socioeconomic status, showing that all children can benefit from engaging conversation.

Adding to these findings, researchers from Columbia University found in 2019 that children who experienced more conversational turns or heard more words from adults had significantly greater surface area in one the brain’s language hotspots, the left perisylvian cortex. Conversational turns had the greatest effect.

Taken together, this research contributes towards a greater understanding of the neuroscience of conversations — a novel and flourishing area of research — that teaches us how our brains communicate and responds to our environments.

While conversations are intimately ingrained into our day-to-day lives, we tend to be more aware of ourselves when meeting someone new and making a first impression.

In fact, a “liking gap” may pop up between conversation partners. This is a bias in which people are overly pessimistic about their performance as opposed to their partner’s in initial conversations.

People tend to hold themselves in high regard, yet we underestimate our own likability in social interactions. The reasons behind this liking gap range from an emphasis on self-improvement to hyper-awareness of our own social awkwardness.

“One of life’s greatest fears is social evaluation. And so it makes sense that people are vigilant to any potential causes for embarrassment or social awkwardness,” wrote Erica Boothby and Gus Cooney, the psychologists who proposed the liking gap.

We truly are our own worst critics: Despite this self-pessimism, Boothby and Cooney's 2018 research suggested that people do tend to like us during first impressions more than we think they do. This bias is systematic: It exists in groups and teams, and the liking gap can persist over periods of time.

If we consciously approach this tendency, we could improve upon both individual and group levels of conversational intelligence. We can’t read each other’s minds — at least yet — so there’s a tangible air of uncertainty about what others think of us. But don’t let it get to your head.