We Really Are Sorry, But Your Soul is Still Dead

Over the past few weeks, Christian neurosurgeon Michael Egnor, who writes on Evolution News & Views, and atheist neurologist Steve Novella (Neurologica) have been having an, er, vigorous debate about what neuroscience can tell us about materialism and the soul. 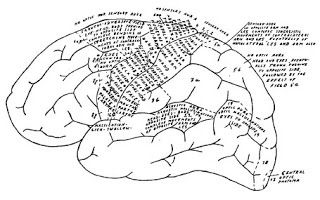 As reported in New Scientist, this is part of an apparant attempt to undermine the materialist position (that all mental processes are the product of neural processes), on the part of the same people who brought you Intelligent Design. Many are calling it the latest front in the Culture War.

A couple of days ago Denyse O'Leary, a Canadian journalist who writes the blog Mindful Hack(*), posted some comments from Egnor about the great Wilder Penfield and his idea of "double consciousness" (my emphasis)

[By stimulating points on the cerebral cortex with electrodes during surgery] Penfield found that he could invoke all sorts of things- movements, sensations, memories. But in every instance ... the patients were aware that the stimulation was being done to them, but not by them. There was a part of the mind that was independent of brain stimulation and that constituted a part of subjective experience that Penfield was not able to manipulate with his surgery.... Penfield called this "double consciousness", meaning that there was a part of subjective experience that he could invoke or modify materially, and a different part that was immune to such manipulation.

I generally find arguing about religion boring, and I've no wish to enlist in any Culture Armies (I'm British - we're a nation of Culture Pacifists), but I'm going to say something about this, because it's just bad neuroscience. Maybe there are good arguments against materialism, but this isn't one.

Unfortunately, neither O'Leary nor Egnor allow comments on their blogs, but immediately after posting this I emailed them both with a link to this post. We'll see what happens.

Anyway, Penfield, whom you can read about in great detail at Neurophilosophy, was a pioneer in the functional mapping of the cerebral cortex. He was a neurosurgeon, and as part of his surgical procedures he would systematically stimulate different points of the cerebral cortex with an electrode, so as to locate which areas were responsible for important functions and avoid damaging them. Michael Egnor, following Penfield, is correct that this kind of point stimulation of the cortex tends to evoke sensations or motor responses which are experienced by the patient as external. Point stimulation is not reported to be able to effect our "higher" mental faculties such as our beliefs, desires, decisions, and "will"; it might evoke a movement of the arm, say, but the subject will report that this felt like an involuntary reflex, not a willed action.

However, to take this as evidence for some kind of a dualism between a form of conciousness which can be manipulated via the brain and another, non-material level of conciousness which can't (the "soul" in other words), is like saying that because hammering away at one key of a piano produces nothing but an annoying noise, there must be something magical going on when a pianist plays a Mozart concerto. Stimulating a single small part of the brain is about the crudest manipulation imaginable; all we can conclude from the results of point-stimulation experiments is that some kinds of mental processes are not controlled by single points on the cortex. This should not be surprising, since the brain is a network of 100 billion cells; what's interesting, in fact, is that stimulating a few million of these cells with the tip of an electrode can do anything.

Neuroskeptic is frequently critical of fMRI, but one of my favorite papers is an fMRI study, Reading Hidden Intentions in the Human Brain. In this experiment the authors got volunteers to freely decide on one of two courses of action several seconds before they were required to actually do the chosen act. (It was deciding betweening adding vs. subtracting two numbers on a screen.) They discovered that it was possible to determine (albeit with less than 100% accuracy) what subjects were planning to do on any given trial, before they actually did it, through an analysis of the pattern of neural activity across a large area of the medial prefrontal cortex.

The green area on this image shows the area over which activity predicts the future action. Importantly, no one point on the cortex is associated with one choice over another, but the combination of activity across the whole area is (once you put it through some brilliant maths).

Based on this evidence, it's reasonable to suppose that we could manipulate human intentions if, instead of just one electrode, we had several thousand (or million), and if we knew exactly which pattern of stimulation to apply. Or to run with the piano analogy: we could play a wonderful tune if we were skilled enough to play the right notes in the right combinations in the right order.

In fact, there are plenty of things which already are known to alter "higher" processes. At the correct doses, acetylcholine receptor antagonists such as scopolamine and atropine can produce a state of delerium with hallucinations which are experienced as being indistingishable from reality. Someone might talk to a non-existent friend or try to smoke a non-existent cigarette, without any knowledge of having taken a drug at all. Erowid has many first-hand accounts from people who have taken suchdrugs "recreationally" (a very bad idea, as you'll gather if you read a few.)

Then there's psychiatric illness. Someone who's psychotic may hear voices and believe them to be real communications from God, or the dead, or a radio transmitter in his head. A bipolar patient in a manic state may believe herself to have incredible talents or supernatural powers and dismiss as nonsense any suggestion that this is a result of her illness. In general those suffering from acute abnormal mental states may behave in a manner which is completely out of character, or think and talk in bizarre ways, without being aware of doing so. This is called "lacking in insight".

We don't yet know the neurobiological basis of these states, but that they (often) have one is beyond doubt; give the appropriate drugs - or use electricity to induce seizures - and they (usually) vanish. Many people in the advanced phases of dementia, especially Alzheimer's disease, as a result of neurodegeneration, are similarly unaware of being ill - hence the sad sight of formerly intelligent men and women wandering the streets, not knowing how they got there. Brain damage, or stimulation of deep brain structures (not the cortex which Penfield studied), can lead to profound alterations in personality and emotion. To summarize - if you seek the soul in the data of neuroscience, you will need to look harder than Penfield did.