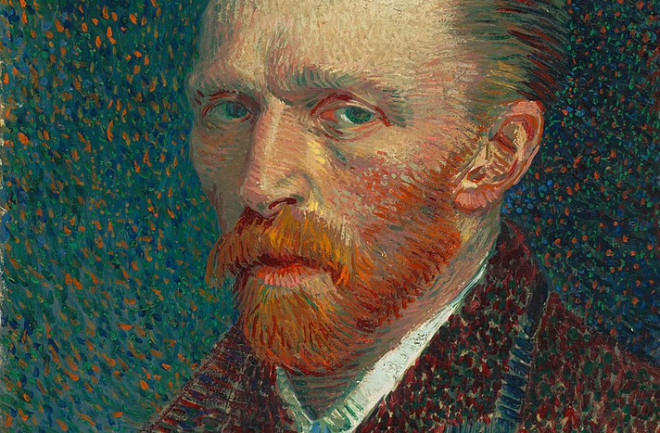 A self-portrait by Vincent Van Gogh. The artist is thought to have experienced synesthesia. (Credit: Wikimedia Commons)

Oh, to be a synesthete, those rare people with access to an extra layer of perception. Sounds have colors. Words have taste. Colors play music. The list goes on. The phenomenon isn't totally understood by scientists, but the general idea is that those with synesthesia experience sensory inputs differently than the rest of us.

It's no wonder that synesthesia is common among artists. But for those of us that just see letters as letters and can't taste a song, synesthesia is more apt to inspire jealousy than creativity. We simply don't have the neural link-ups that lead to the ability.

Not so fast, say two researchers from the University of Michigan. In experiments with normal (i.e. non-synesthete) people, Anupama Nair and David Brang say they induced a specific kind of synesthesia with a simple technique. When participants were played sounds in a dark room, around half of them experienced flashes of light, though no actual light was present. It means that synesthesia may be more common that we thought — most of us might simply not encounter the kind of situations that stimulate it.

The research, published this month in the journal Consciousness and Cognition, was inspired by a puzzling experience Brang had as a graduate student.

"While waiting to fall asleep at night with my eyes closed in a dark room, sudden and unexpected sounds (such as the house creaking or a door slamming) would cause a brief but salient flash of light (white or colored, and either encompassing my entire visual field or taking on a complex pattern)," he says in an email.

"Surveying undergraduates, I quickly found that the sensation was quite common while individuals waited to fall asleep at night."

This is similar to sound-color synesthesia, where sounds will be associated with different, specific images.

Brang, now an assistant professor of psychology at Michigan, teamed up with Nair, and they set out to recreate the experience in the lab. They recruited 21 undergraduates from the university and had them sit in a dark room for five minutes with their eyes closed. A recorded voice then read letters of the alphabet, preceded by a visual attribute like "curved" or "symmetrical." The participants had to say if the letter possessed the characteristic stated.

The participants drew representations of what they saw during the experiment. (Credit: Nair and Brang/Consciousness and Cognition)

After some of these letters, the researchers would play a short beep, and the participants had to press a button if they had seen anything unexpected. Surprisingly, it was fairly common, they found. About 50 percent of the people reported seeing flashes of light in a few different patterns after hearing the beep, though nothing was actually there. Further experiments found that louder beeps would cause the flashes more often and that they were more common if the beep immediately followed the cue to imagine a letter.

In short, the researchers seemed to have activated some sort of latent synesthetic capability in their participants. It shouldn't actually be so surprising, they say. The areas of our minds that are responsible for compiling and translating various sensory stimuli, like sounds and colors, are actually interconnected in all of us, Brang says.

This helps us understand when someone is talking, for example: we'll pick up on the sight of someone's mouth moving, and that helps cue our auditory system to pick out words. These kinds of connections don't normally create noticeable stimuli, rather, the sight of a mouth moving simply helps jog auditory neurons into action. In the right conditions, though, these interconnections can produce things we'll actually experience.

"We used a couple of ‘tricks' to shift the balance of this auditory-visual connection," Brang says. The researchers damped down the visual input by putting the subjects in a dark room while simultaneously stimulating their visual cortex by asking them to imagine pictures and they used loud sounds that would evoke a strong signal along the auditory-visual pathway.

We all might be potential synesthetes, in other words. Those of us who experience the cross-sensory stimulation in everyday situations might simply have stronger networks of interconnection, allowing the experience to happen more easily. Other studies have shown that people can be trained to associate different letters with colors, and documented the appearance of synesthesia in those with vision loss. There's also, of course, the experiences of those taking psychedelic drugs like LSD, long known to induce synesthesia. It's still unknown whether that form of synesthesia occurs in the same way as the non-tripping kind, though.

As for why some participants in the study were still resistant to synesthesia, Brang thinks they might simply not have been stimulated enough or in the right way.

"My hunch is that this is a trait-like difference, such that those who experienced these sensations are more susceptible to them," he says. "Two possibilities are that this is due to greater visual-cortical excitability in some individuals (since more excitable neurons would fire more easily to the auditory inputs) or a stronger auditory-visual anatomical connection. It should be possible to evoke these sensations in most individuals but it may just take a more tailored context."

When you're falling asleep tonight, maybe take a moment and listen — you might get a flash of inspiration.