Last week I gave a talk in Brazil called Why Is It So Hard To Think About The Brain?, Well, no sooner have I returned than a story appeared that illustrates my point all too well. A neuroscience paper made headlines around the world on Friday. Here's Time's take:

One Dose of Antidepressant Changes the Brain, Study Finds One dose of antidepressant is all it takes to change the brain, finds a small new study published in the journal Current Biology. The study authors took brain scans of 22 healthy people. Some were randomized to take a dose of the most common kind of antidepressant, an SSRI (selective serotonin reuptake inhibitor). After another brain scan three hours later, researchers saw a dramatic change: a widespread drop in connectivity throughout the brain, except where it was enhanced in two brain regions, the cerebellum and thalamus...

Many other outlets covered the research in muchthesameterms. Here's the paper: Serotonergic Modulation of Intrinsic Functional Connectivity by Alexander Schaefer and colleagues. 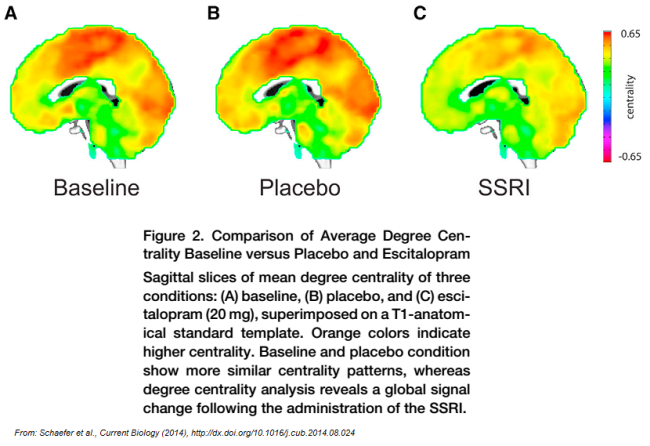 My concern here is over the headlines, in particular that phrase "changes the brain." This statement sounds like a meaningful (and perhaps alarming) report of a scientific finding. But, in fact, it's vague and ambiguous. The problem is that the statement can be read on two levels: As a weak truism: in one sense, almost everything changes the brain: any sight, sound, smell, blog post, or even thought that crosses your mind, will change your brain activity. The brain's job is to respond to things. Its activity is change. Brain activity is ever-changing and - for that reason - changes are almost always reversible. Every time you open your eyes, for example, widespread changes in your brain activity result. But every time you close your eyes, these changes are reversed. So in this, weak, sense, Time's headline is valid. Schaefer et al did indeed find changes in brain activity (namely functional connectivity) in response to a dose of an SSRI. However, this is not exactly breaking news, because the same could be said of thousands of other things. I think the reason why this study made the headlines is that "changes the brain" can be read in another way: As a scary strong claim: to many people, "changes the brain" implies that some kind of lasting and important change has been made. The implicit understanding here is that the brain is basically static - it's 'default' behavior is to stay the same. If something is static by default, then whenever it does change, that's something to write home about. And when something basically static changes, those changes are likely to persist. This 'static brain' idea is implicitly dualistic, as I've said before: it is based around a vague mind/dynamic vs. brain/static duality. And it is this dualism that, I believe, explains why this story made the headlines. My argument here is largely impressionistic, but corroborating evidence comes from the fact that some journalists writing up this story 'defaulted' to the idea that the SSRI altered brain structure, which is nothing to do with the paper's actual findings. See for instance the Examiner's headline, and the filename of the LA Times story (they must have corrected the headline). Overall, we have a story that's appeared with striking and (perhaps) alarming headlines around the world, but I don't think it should be making headlines at all. These findings don't have any special interest for the general public. I'm not criticizing the paper when I say that. These results are interesting for neuroscientists. That a singledose of an SSRI can affect brain activity is of particular scientific interest, because these drugs take a few weeks to have an effect on mood. This is not the first report of rapid SSRI effects, mind. They were demonstrated five years ago (here) using fMRI in humans; over 10 years ago it was shown that a single dose of SSRI affects neurochemistry in rodents (here).