I just learned about a truly remarkable case in which a doctor apparently wrote a paper about a serial killer who murdered her five children - without realizing what had happened. It's an old case, but it doesn't seem to be widely known today. The paper is called

and it was written in 1972 by Dr Alfred Steinschneider of Syracuse, New York. In this paper, Steinschneider described the case of a woman, "Mrs H", who had already lost three children, ostensibly to sudden infant death syndrome (SIDS). Dr Steinschneider describes how two additional children from the "H" family were studied in his sleep laboratory in an effort to determine whether sleep apnea was a risk factor for SIDS. Both children did show apnea in the lab, and both died shortly after being discharged from the clinic back home with Mrs H. Steinschneider concluded that apnea was "part of the final pathway" leading to infant death in SIDS. 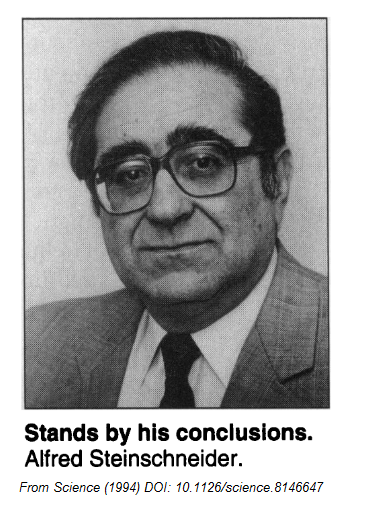 But over twenty years later, "Mrs H" - her real name Waneta Hoyt - was convicted of murdering her children by smothering. A forensic pathologist, Linda Norton, had formed suspicions about "Mrs H" after reading Steinschneider's paper, and she brought them to the attention of a prosecutor in Syracuse. In 1992, the prosecutor opened a case against Hoyt. Under police interrogation, Hoyt confessed to killing each of her five children by smothering. She later retracted her confession and denied the charges, pointing to Steinschneider's paper as evidence of her innocence. It didn't work: Hoyt was convicted of murder in 1994. She died in jail four years later.

This is a tragic case, but also a fascinating one. Why did Dr Steinschneider fail to suspect Hoyt - even after the nurses working in Steinschneider's lab did repeatedly raise concerns about her? Was he blinded by his desire to confirm his apnea hypothesis?

The nurses in Steinschneider's clinic emotionally recall their sense that Waneta Hoyt was a menace to her children, and they make clear Steinschneider's rejection of any reported data that controverted the results he sought to find...

During the trial, two defense lawyers were overheard speaking of Steinschneider's nurses, one asking, ''Did any of them go to Steinschneider, talk to him, say something's wrong?'' "At least two did." "What'd he do, just slough it off?" "Apparently." Said the first lawyer: "He had a paper to write."

", published in 2011. It was supposedly written by a disabled man, DMan Johnson. The paper was retracted

after Anna Stubblefield, who claimed to have helped Johnson to write the paper using 'facilitated communication

' (FC) was convicted of sexually assaulting him. In the paper, 'Johnson', or more likely Stubblefield, praised FC. (Edit: Thanks to commenter Chris Borthwick for pointing out that Stubblefield's conviction for assaulting Johnson has been overturned

and she is currently awaiting a second trial.) Clearly there are many differences between the Hoyt paper and the DMan Johnson case. However, in both cases, we had a paper that was seemingly an account of a scientifically interesting phenomenon - SIDS following sleep apnea, or the success of FC - but it later turned out to have a criminal explanation. Are there any other similar examples?