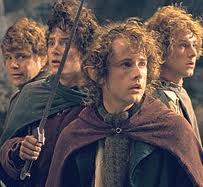 I've postedtwice now about the psychology underlying the debt ceiling negotiations, and the insoluble problem that occurs when one side is inclined to think in black and white, and one side is not. We rarely admit that we have a divide over nuance and compromise at the heart of our politics, and yet the evidence supporting this idea is strong, and the problem seems to be getting worse. Now comes the Wall Street Journal, of all places, reaffirming this assessment in a fascinating, albeit seemingly unconscious way:

The idea seems to be that if the House GOP refuses to raise the debt ceiling, a default crisis or gradual government shutdown will ensue, and the public will turn en masse against . . . Barack Obama. The Republican House that failed to raise the debt ceiling would somehow escape all blame. Then Democrats would have no choice but to pass a balanced-budget amendment and reform entitlements, and the tea-party Hobbits could return to Middle Earth having defeated Mordor. This is the kind of crack political thinking that turned Sharron Angle and Christine O'Donnell into GOP Senate nominees. The reality is that the debt limit will be raised one way or another, and the only issue now is with how much fiscal reform and what political fallout.

First just a technical matter: Mordor is part of Middle Earth. The Journal means "return to the Shire." C'mon, don't conservatives know this stuff? More broadly, is not the Journal, itself a conservative outlet, affirming with this analogy the idea that the Tea Party sees the world in black and white, good and evil? And that this is um, kind of an inadequate way of looking at things? I myself, though, am inclined to use a Star Wars analogy. In the immortal words of Obi Wan Kenobi: "Only a Sith deals in absolutes." http://www.youtube.com/watch?v=Ak516vtDTEA