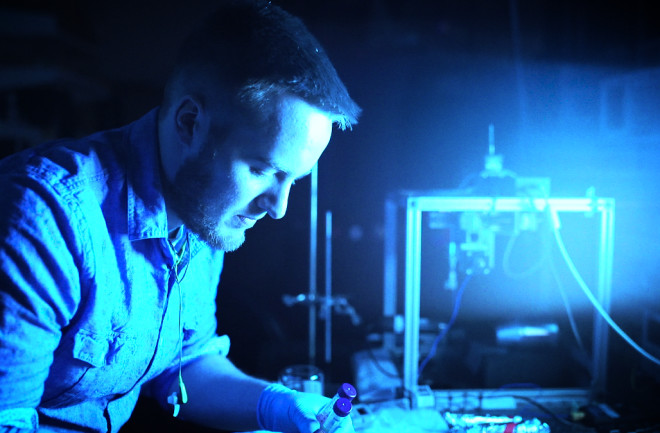 A researcher at work in the Schaffer-Nishimura lab. (Credit: Stall Catchers, CC BY-SA 4.0)

Note: Portions of this article came from a description of Stall Catchers previously written by SciStarter.

Across the United States, 5.7 million people are living with Alzheimer’s disease, the seventh leading cause of death in America. But there is still no treatment or cure. Alzheimer's hits close to home for many of us who have seen loved ones suffer and who feel hopeless in the face of this disease. With Stall Catchers, an online citizen science project, joining the fight against Alzheimer’s is as easy as playing an online computer game.

The Search for a Cure

Scientists at Cornell University found a link between “stalled” blood vessels in the brain and the symptoms of Alzheimer’s. These stalled vessels limit blood flow to the brain by up to 30 percent. In experiments with laboratory mice, when the blood cells causing the stalls were removed, the mice performed better on memory tests.

The researchers are working to develop Alzheimer's treatments that remove the stalls in mice in the hope they can apply these methods to humans. But analyzing the brain images to find the stalled capillaries is hard and time consuming. It could take a trained laboratory technician six to 12 months to analyze each week’s worth of data collection.

So, Cornell researchers created Stall Catchers to make finding the stalled blood vessels into a game that anyone can play. The game relies on the power of the crowd — multiple confirmed answers — before determining whether a vessel is stalled or flowing.

Since its inception is 2016, he project has grown steadily, addressing various datasets and uncovering new insights about Alzheimer’s disease. Citizen scientists who play the game identify blood vessels as “flowing” or “stalled,” earning points for their classifications.

One way Stall Catchers makes this research fun is by allowing volunteers to form teams and engage in friendly competition. “Stall Catchers has always been about bridging communities.  Our volunteer ‘Catchers’ are transplants from other citizen science projects, Alzheimer's caregivers, scientists, gamers, grandparents, grandchildren, students, library patrons and the list goes on,” says Pietro Michelucci, director of the Human Computation Institute and Stall Catcher’s creator.

Meena Patel, a Verizon volunteer champion, orchestrated a multi-week volunteer event in late 2020 centering on the project with her finance team, which is mainly based in Basking Ridge, New Jersey. She added a friendly competition element, sorting the employees into teams to see who could accomplish the most research. The event exceeded her expectations. “They went above and beyond, even to the last day of the challenge.”

Michelucci noticed the spirit Verizon volunteers brought to the game. “They bring new personalities and a fun competitive spirit that helps us all bring our best game to curing Alzheimer's. When the Verizon league joined our group, we saw friendly banter in the chat box,” says Michelucci. “And sometimes a newcomer discovers they have a drive or dedication that brings them back for hours daily, and they suddenly realize they have found a community that feels like home. When this happens, as it did with a member of the Verizon team, we feel like we have been gifted a new family member, and a fresh leg up on combating Alzheimer's.”

One of the volunteers, Cheryl Mulligan, appreciated the opportunity to do meaningful work toward ending Alzheimer’s. One of her loved ones had recently passed away from dementia when she started playing the game. “It's a very helpless feeling to deal with, whether it's someone in your family or yourself,” says Mulligan.

Mulligan found Stall Catchers empowering. “It just gives you the satisfaction of being able to have the opportunity to do something to actually help. You can get right in there and participate in analyzing the data for the research that, hopefully, will be able to either prevent or find a cure or something for Alzheimer's or related dementia.”

“If someone is dealing with it within their family or themselves, it's just a satisfying way to be able to take part in helping with the research,” says Mulligan.

In addition to the inspiring community element Verizon brought to the project, some volunteers made historic contributions to the project. Verizon employee Lawrence Smith, for example, rapidly made his way onto the all-time Stall Catchers leaderboard. He credits transferable skills, especially his attention to detail, from his work in financial planning and analysis at Verizon for allowing him to succeed in the game. “Just like in my finance role, where I'm looking at tons of transactions that all look the same but I'm trying to find the one part of the transaction that's different, explains to me why I'm seeing a variance in the stalls,” says Smith.

The commitment to making a difference through volunteering sets Verizon apart, Patel says. It also was a great experience for her team. “Volunteering brings you together and it shows how people really are caring. You get to know your coworkers at a personal level, instead of just as a professional at work.”

Though Patel’s team wrapped up their Stall Catchers challenge in late 2020 with the engineering team in the lead, Verizon volunteers across the company are still making a difference with Stall Catchers. They’ve classified 219,782 videos in just two years to move the research forward and show no sign of stopping. Want to join them? Visit Stall Catchers today to join the fight against Alzheimer’s.