There's been a lot of discussion lately about Einstein's brain. 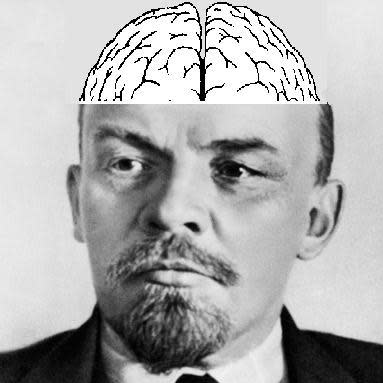 Less well-known, but equally fascinating, is the

- for just like Albert, the founder of the Soviet Union was fated to end up as a series of preserved slices. Lenin died of a series of strokes at the young age of 53. By the age of 50, he was suffering from the onset of cognitive decline, usually seen in much older people. The legendary orator began to struggle to find the words to express himself. His first stroke, at age 52, left him disabled, and the third killed him. It's rare for this to happen to someone is his early fifties. During his autopsy, it was found that the blood vessels around Lenin's brain were heavily calcified - essentially, they had hardened, and narrowed, due to a build-up of minerals and fats. This is known as atherosclerosis and, although it happens to all of us as we age, Lenin suffered from an unusually severe, and early, case. It was noted during the postmortem that tapping the vessels with a pair of metal tweezers produced a sound as if they were made of stone. But why? Lenin was a non-smoker, took regular exercise, and drank little - so he had none of the known risk-factors for atherosclerosis. Moreover, it's unusual for the brain to be selectively affected; the vessels in the rest of Lenin's body were only moderately calcified. A team of neurologists led by UCLA's Harry Vinters have suggested a possible answer in a new paper: Vessels of Stone: Lenin's "Circulatory Disturbance of the Brain". They point to a recently-discovered disorder that causes selective atherosclerosis of the blood vessels in the legs, caused by a mutation in the gene NT5E. Vinters and his colleagues suggest that Lenin might have had a similar genetic problem, but one that affected primarily the brain. Lenin's father and siblings (seemingly) suffered circulatory diseases as well; indeed his father died at almost exactly the same age, in a similar fashion. Still, they admit that such a genetic disorder remains speculative at present. The more traditional explanation for Lenin's neurological decline is syphilis, but it's not clear that he ever had the disease. He was treated for it during his final years, but this may have been a long-shot attempt by his doctors to save his life, in the absence of a proper diagnosis.