Arbitrary and unfair behavior by scientific journals risks damaging the public's perception of science. Two weeks ago, the Journal of Translational Science published a paper that reported a correlation between vaccination and autism in 666 children. On Monday, the paper disappeared from their website, with no explanation or retraction notice. Google's cache still has the paper here. Retraction Watch has more details. 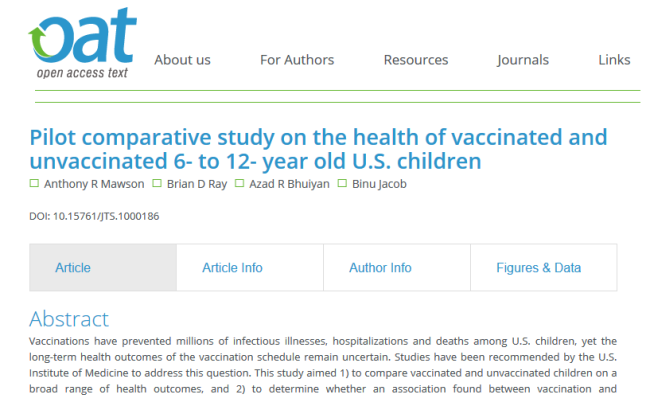 In my view, this journal's behavior is a perfect illustration of the fact that two wrongs don't make a right. Wrong #1 was publishing the Mawson et al. study, which is, in my opinion, fatally flawed. For example, all of the data came from a questionnaire completed by parents; the accuracy of these reports is unknown. Selection bias is also a serious concern. The study was advertised via the contact lists of various homeschooling organizations in four US states, and these adverts mentioned the "purpose and background" of the study. If parents who perceived vaccination as having harmed their child were more likely to respond to the advert, selection bias would result. So, in my view, the results of this study are uninterpretable, and this paper should never have been published. However, two wrongs don't make a right. Wrong #2 was the way Mawson et al.'s paper was deleted without an announcement or an explanation. That's not how science works. There is something called the scholarly record, and we can't try to airbrush things out of it. If journals want to retract a paper, they should explain their reasons for doing so by publishing a retraction notice, and ideally they should explain why they decided to publish the flawed paper in the first place. Now, you might say that we shouldn't expect any better from "Open Access Text", the publishers of the Journal of Translational Science, because they're an obscure, predatory outfit. However, this isn't the first time that the Mawson et al. paper has been published and then 'disappeared'. Six months ago, the same scenario took place at a different journal, Frontiers in Public Health. While Frontiers has many critics (includingme), they are certainly one of the largest academic publishers.

This kind of behavior by journals damages the image of science. It plays straight into the hands of those who say that mainstream science isn't about truth, but is merely the propaganda of powerful groups. The public would be forgiven for asking questions about what happened at the Journal of Translational Science and Frontiers in Public Health. Why publish a paper and then suddenly delete it? Or, if there was a good reason for retracting the paper, why not at least explain what it was? Did the paper disappear because Big Pharma stepped in to suppress the truth about the dangers of vaccines...? What really happened is that two journals published Mawson et al.'s paper because they have low standards of peer review, and then after being (rightly) criticized for this, they took the lazy way out and just deleted it, rather than stand by it (or at least explain their retraction properly). But it looks bad, and it looks bad for science as a whole, not just for these journals in particular. The power to publish science is also the power to drag science's name through the mud.