Unlike humans, chimpanzees only punish when they’ve been personally wronged 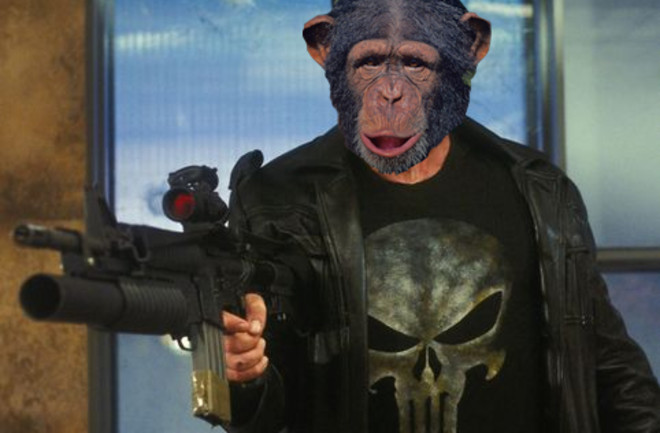 When Delta Airlines refused to let Arijit Guha board a plane because his T-shirt made passengers uncomfortable, others made Delta aware of their outrage. When Samsung infringed Apple’s copyright, a jury of independent peers awarded Apple more than $1 billion in damages. When Republican Todd Akin claimed that women could stop themselves from becoming pregnant if raped, people called for his head.

These recent events all illustrate a broad human trait: we seek to punish people who do wrong and violate our social rules, even when their actions don’t harm us directly. We call for retribution, even if we have nothing specific to gain from it and even if it costs us time, effort, status or money to do so. This “third-party punishment” is thought to cement human societies together, and prevents cheats and free-riders from running riot. If you wrong someone, and they’re the only ones who want to sanction you, the price of vice is low. If an entire society condemns you, the cost skyrockets.

Do other animals do the same thing? It’s not clear, but one group of scientists believes that our closest relative – the chimpanzee – does not. Katrin Riedl from the Max Planck Institute for Evolutionary Anthropology in Leipzig, Germany found that chimpanzees will punish individuals who steal food from them, but not those who steal food from others. Even if the victim was a close relative, the third party never sought to punish the thief. These were the first direct tests of third-party punishment in a non-human animal, and the chimps got an F.

Riedl’s conclusion is stark: “In contrast to humans, chimpanzees do not engage in third-party punishment.” This behaviour, so crucial to our stable societies, seems to have evolved after our ancestors split away from the other apes. “This might explain, in part, how we have been uniquely able to form large-scale societies of unrelated individuals,” says Keith Jensen, who was involved in the study. “It can allow for cooperation to move beyond simple tit-for-tat and allow for norms of cooperation, and institutions to enforce and sanction them.”

Frans de Waal, a primate researcher from Emory University, is more circumspect. “I agree that [the experiments] set up a situation in which chimpanzees could potentially perform third-party punishment,” he says. They didn’t, but why? “Negative evidence has its place in science, but is to be treated with circumspection as there are many reasons why certain behaviours may not occur. Only one of those reasons is that the capacity is lacking.” Absence of evidence is not evidence of absence. “That’s always a worry,” says Jensen, “but then science works on disconfirming, rather than proving, hypotheses.”

There is some other evidence for third- party punishment in the wild. In social insects like ants and bees, some workers police their nestmates and clamp down on reproduction attempts outside the royal line, even though those workers can’t breed either. In cleaner fish, which pick parasites off larger animals, males will attack their female partners if they bite the client’s flesh instead. Closer to us, chimps and pig-tailed macaques both have dominant individuals who will intervene in fights between subordinates.

But in all these cases, there could be selfish rather than cooperative motives. The cleaner fish could just be preventing their partners from annoying their clients. The policing chimps could be asserting their dominance, protecting females, or trying to make allies. “Perhaps,” says Jensen, “it is just because fighting is annoying.” As ever, reading into the motivation of animals is not something to be lightly done at first glance.

Riedl wanted a more direct test. She worked with 13 chimps who took turns playing an actor, a thief and a victim. They sat in three cages surrounding a central space, so they could see each other but not interact directly. In the central space was a Plexiglas puzzle box with food inside. The “victim” chimp was closest, and could move five sliders to get the food to fall down to the bottom of the box.

Then, Riedl pulled on a rope to open a flap in the victim’s cage, allowing it to finally reach the food. She also opened another flap that gave the thief access to a rope. If it pulled, it could tug the food away from the victim. And it could get away with it too, if not for the pesky actor. The actor also had a rope, which opened a trapdoor in front of the thief’s cage and sent the stolen food plummeting away. The actor could never reach the food itself but he could punish the thief for their transgression against the victim.

But they didn’t. Some of them did collapse the trapdoor, but they were just as unlikely to do so in response to third-party theft as they were when the experimenter visibly took the food away. Riedl expected that dominant chimps should punish third parties more than subordinates, since they are the ones who police wild interactions. Not so. She also wondered if close kin would show third-party punishment, since animals are expected to behave more altruistically towards others who share large proportions of their genes. Nope. Not that either.

The only consistent use of punishment was by dominant chimps, castigating subordinates who steal their food directly. As Riedl writes: “Chimpanzee punishment is of the “might makes right” variety.” It’s all about personal harm, and positions of power.

That contrasts sharply to what humans do. Forget the hand-waving complaining about broken modern societies: For the most part, humans adhere to social norms and frown on others who break them. Even three-year-old children show such sensitivities. What does it mean that the chimps in Riedl’s experiments did not?

It could mean that chimps generally don’t. After all, food is a prized commodity in chimp life, and the theft of food would be a punishable offence if ever there was one. Riedl concludes that third-party punishment “would not seem to be an ancestral feature of the last common ancestor to humans and chimpanzees.” That’s not so radical a conclusion. There are many things that unite us with our closest relatives, but it’s not controversial to say that there are differences.

For example, chimps, cooperative though they are, are less cooperative than us. Primatologist Sarah Hrdy imagines what would happen if she was on a plane, and all the people quietly sitting in each other’s company suddenly turned into chimps. She says, “Any one of us would be lucky to disembark with all their fingers and toes still attached… Bloody earlobes and other appendages would litter the aisles.”

The question is where the differences between human and chimp behaviour lie. Michael Tomasello, who led Riedl’s study, has long emphasised those differences. His studies have found: that children share when they work together but chimps do not; that they do not care about fairness (or rather, are “insensitive to inequity”); and that they prefer to work alone to get food rather than working together (unlike children). (This is not to cast Tomasello as some professional downplayer of chimp cooperation: He has also found that chimps help each other to get food and other items (although less readily than humans), and that they’re smart enough to deduce the inferences of their peers.)

On the flipside, Frans de Waal has been more likely to emphasise the similarities we share with chimps. He has found that chimps spontaneously help each other, and that they cooperate as readily as humans if they’re put to the same tasks. About Riedl’s new study, he says, “It may not relate well to natural chimpanzee social life. How often are these apes in a situation to remove another’s food without obtaining it for themselves? That they don’t punish, doesn’t mean they do not have a capacity to do so.”

“From a long line of research we have learned to be cautious when chimpanzees do not show a certain outcome that we humans expect,” De Waal adds. Negative experiments initially argued that chimps don’t spontaneously help each other out, and don’t imitate each other’s behaviour, but better studies later provided evidence for both.

De Waal now wants to see what humans would do in the same situation, using the equivalent tests that I wrote about last year. “Until we test the same set up on uninformed humans, we don’t know,” he says. Jensen says that this particular version was “custom-designed for captive chimpanzees” but they have adapted it for human children. The results are awaiting publication.

Meanwhile, he says, “If chimpanzees (and other animals) have third party punishment, why do we see so little evidence of it and no evidence of large-scale cooperation. Perhaps that is a more interesting question.”

Images via Lionsgate (sort of) and Possumgirl2

More From Discover
Mind
Why Do Some People Love Watching Animals Fight?
Mind
The Science of Spotting a Liar
Mind
Is There Such a Thing As Universal Humor?
Recommendations From Our Store
My Science ShopCosmos: Possible Worlds
My Science ShopStrange Science
My Science ShopEinstein's Universe
My Science ShopElements Flashcards
Shop Now
Stay Curious
Join
Our List