Turns Out Trypophobia Isn't a Phobia

By definition, phobias are learned and can be un-learned. 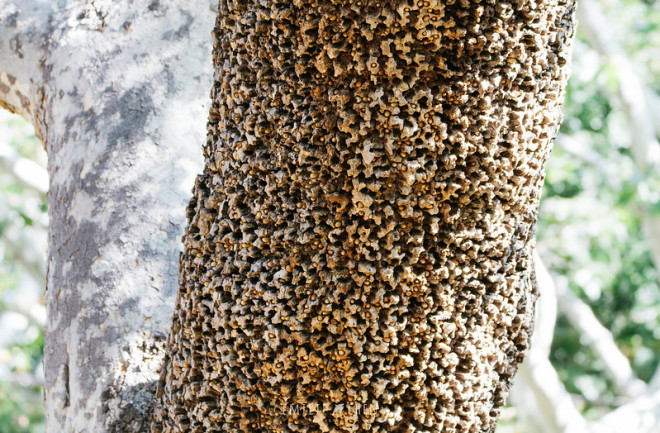 If this image gives you the willies, you may have what has been called trypophobia ⁠— the fear of clusters of small holes. It has been hypothesized that this fear stems from a resemblance of the holes to patterns on poisonous animals. Although thousands of people find images like this really disturbing, it’s not enough to make it a phobia, which is a learned response that can be unlearned.

These scientists studied preschoolers to determine whether trypophobia is an instinctive human response that can never be unlearned. To do this, they showed the kids pictures of venomous animals with and without overlaid images of trypophobia-inducing holes. Because only the pictures with holes upset the kids, the researchers believe that the fear is innate, and not a learned association with poisonous animals. So there you have it: If that tree makes you feel horrible, there is nothing you can do about it.

Is Trypophobia a Phobia?

“In the past 10 years, thousands of people have claimed to be affected by trypophobia, which is the fear of objects with small holes. Recent research suggests that people do not fear the holes; rather, images of clustered holes, which share basic visual characteristics with venomous organisms, lead to nonconscious fear.

In the present study, both self-reported measures and the Preschool Single Category Implicit Association Test were adapted for use with preschoolers to investigate whether discomfort related to trypophobic stimuli was grounded in their visual features or based on a nonconsciously associated fear of venomous animals.

Thus, the discomfort felt toward trypophobic images might be an instinctive response to their visual characteristics rather than the result of a learned but nonconscious association with venomous animals. Therefore, it is questionable whether it is justified to legitimize trypophobia.”

More From Discover
Mind
What is Anxiety and How Can Worries Overpower Us?
Mind
How Your Brain’s “Fingerprints” Could Diagnose Disease
Mind
Relaxing ASMR Sounds are Harder to Re-Create Than You’d Think
Mind
What Is Dissociative Identity Disorder?
Mind
Supporting A Child’s Rapidly Developing Brain
Mind
Do Animals Like Dogs Experience Social Commitment Like Humans?
Recommendations From Our Store
My Science ShopDiscover STEM Kits
My Science ShopDiscover 2022 Calendar
My Science ShopStrange Science
My Science ShopElements Flashcards
Shop Now
Stay Curious
Join
Our List