Trying to Lose My Religion

A skeptic grapples with her spiritual experience, religious upbringing and the workings of the brain. 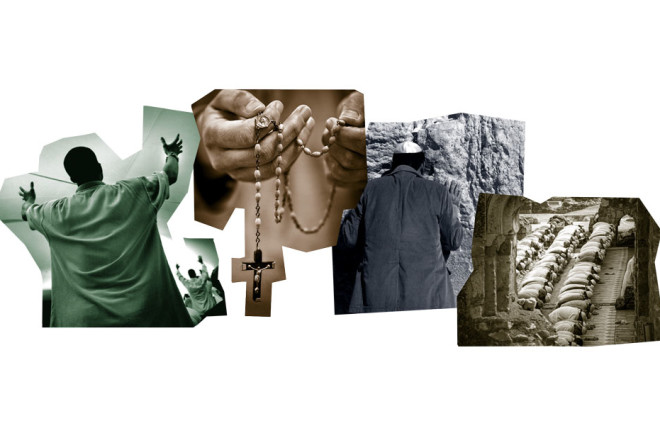 My Greek Orthodox grandparents’ house had Byzantine icons of Jesus on virtually every wall. It’s not that they were die-hard religious people; they seldom went to church. But they did have religious rituals they stuck to. Burning incense in the house every Sunday was one. Bringing home koliva (a delicious dish of sweetened boiled wheat) after special services was another. They also insisted that if I wanted to be in God’s good books, I should make the sign of the cross every time I walked by a church or heard the church bell ring. And if I saw a priest on the streets? I should spring over to kiss his hand.

But as I got older, I learned about science, philosophy, logic and reason. I don’t fancy God as a long-bearded, old man with wizardlike powers anymore. And heaven and hell seem an oversimplified reward-and-punishment scheme.

There’s a catch, though. Every time I go to church, I’m still overcome by a mystifying experience that transcends my skepticism. I focus my eyes on the warm glow of the prayer candles, I inhale the intoxicating frankincense, and the reflections of the gold icons around the altar induce a sense of euphoria. I have no choice but to surrender my logic to the religious fervor around me. I lose my sense of self and instead feel oneness.

Every time I go to church, I'm still overcome by a mystifying experience that transcends my skepticism.

What happens in the neural labyrinths of my brain amid these religious experiences? Could my grandparents’ faith, foisted upon me during my formative years, have hard-wired my otherwise logical brain for mysticism?

The Science of Religion

The questions racing through my mind about the inexplicable lure of religious, spiritual and mystical experiences (RSMEs) have long fascinated researchers. In their classic textbook The Psychology of Religious Behavior, Belief & Experience, psychologists Benjamin Beit-Hallahmi and Michael Argyle describe RSMEs as moments of revelation that strike like lightning; swept away by ecstasy, you may lose your sense of place, time and self, and have feelings of redemption and ineffable beauty.

Now, with the help of imaging technology such as single-photon emission computed tomography (SPECT), researchers can see how these experiences play out in the brain. Andrew Newberg, a neuroscientist and director of research at the Marcus Institute of Integrative Health at Thomas Jefferson University in Pennsylvania, headed a small, preliminary study that used SPECT to measure changes in the cerebral blood flow of three Muslims during prayer.

It turns out that while they were praying, participants had less blood flow to their prefrontal cortex and frontal lobe, the areas of the brain where complex behaviors such as planning and expression of personality take place. “Hence, the feeling of surrender,” Newberg explains.

He and his team also observed a slowdown of blood to the parietal lobe, the area that integrates sensory information to help us form a sense of self. When activity in that part of the brain was dialed back, instead of their usual self-identity, the volunteers instead reported a feeling of “oneness” at the peak of their RSMEs.

Finally, the researchers saw a spike in the activity of the limbic system, the brain’s emotional center, and changes in the thalamus, which helps us shape our sense of reality. All of these results, Newberg says, are tied to what he calls the five core elements of religious experiences: sense of intensity and unity, transformation, clarity and a feeling of surrender.

Thinking back to my own uninvited mystical experiences, I felt swallowed by them and filled with emotion, while the details of my surroundings — the colors, the reflections, the shapes — were more defined, brighter and more intense than ever.

Mystical experiences also happen beyond the walls of temples and cathedrals. Psychoactive drugs will do the trick, too. So a team led by University of Zurich psychiatrist Michael Kometer looked at RSMEs triggered by drugs to learn more about the phenomenon.

Kometer and his team gave 50 people a moderate dose of psilocybin, the hallucinogen found in magic mushrooms that’s known to induce spiritual experiences. Then, the experts took brain scans of the volunteers. The results, published in 2015, showed that the drug-induced religious mindset was due to a change in activity in the default mode network — a region associated with how we relate information about the world to ourselves. So while the volunteers were tripping, they felt a sense of unity with their environment.

In a 2016 study, researchers used data from the Vietnam Head Injury Study, a longitudinal project following American male combat veterans with brain injuries. The experts compared this data with data from healthy combat veterans to see how specific brain regions were tied to reported mystical experiences.

Jordan Grafman, one of the study’s investigators, and his team found that injured veterans who experienced more RSMEs were more likely to have damage in an area of the brain called the dorsolateral prefrontal cortex. This region regulates executive functions like planning, some aspects of memory, cognitive flexibility, inhibition and our ability to reason abstractly — all skills key to tamping down our inclination to use mysticism as an explanation for the world around us.

"Mystical experiences can lead to creative thoughts and artistic development."

But while these functions might be hampered in people who have RSMEs, Grafman, a professor of psychiatry and behavioral sciences at Northwestern University, says there’s another side to this phenomenon. “Mystical experiences can lead to creative thoughts and artistic development,” he says. “So for most people, there is this search to find the right balance to have a meaningful existence.”

The Power to Change

But, is everyone wired in the same way for this balancing act? Or are some of us prone to being more religious?

“We’re all capable of religious and other forms of belief systems,” Grafman says. “But, I think, yes, there is sufficient evidence to indicate that, on average, some people are more neurologically wired to be religious.” However, he’s quick to point out that that wiring isn’t set in stone, thanks to neuroplasticity — our brain’s ability to change and shape neural pathways over time, which leads to new memories, skills and habits.

I feel content with my experiences at church. Though I’m still not sure if my tendency to have RSMEs is wired in me or just a byproduct of my early religious exposure, I can at least revel in what I learned about how they work. I know my mind will probably succumb to the experience, but at least I can rationalize it.

[This article originally appeared in print as "Trying to Lose My Religion."]