When you struggle to sleep in an unfamiliar setting, your brain might be trying to protect you. Researchers call this the First Night Effect. 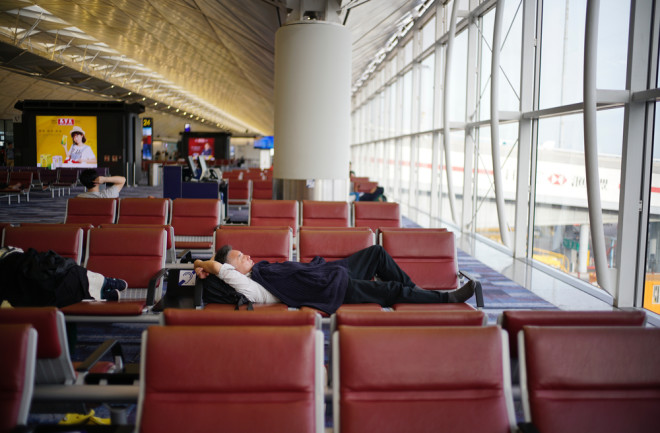 Whether it’s on a plane or in a hospital waiting room, some of us have a hard time sleeping in unfamiliar places. Surely comfort can be an issue in confined, unconventional spaces, like a rigid airport chair. But even the most comfortable and cozy hotel rooms present a battle to humans worldwide. Many of us struggle to get a good night of rest in any new place. This phenomenon, known as the First Night Effect (FNE), impacts numerous humans and some animals. But what’s happening inside our brains during these troubled first nights?

The first registered experiment about FNE was more than 50 years ago, and still today scientists don’t fully understand it. A 2016 study published in Current Biology revealed that during a first night sleeping somewhere new, brain hemispheres don't fall asleep equally. Usually, in familiar places, both the left and the right side of the brain fall asleep the same way. However, during FNE there's an asymmetry between the hemispheres, with the right side sleeping regularly and the left hemisphere staying vigilant to monitor unfamiliar surroundings during the night. Basically, your brain isn't entirely comfortable with the new scenario just yet. Hence, it remains somewhat alert throughout the night — maintaining this survival posture, even when you're asleep.

In the 2016 study, the team of researchers led by Masako Tamaki used advanced neuroimaging techniques to look inside the brains of 11 volunteers, studying how brain waves would react to stimuli during sleep. After making noises, they saw that the brain's left side reacted differently than the right. The electrical waves in an electroencephalogram — a test that detects electrical activity in the brain — shifted the most on the left side.

Beyond reacting, the left hemisphere also triggered action, waking up the body more quickly. In sum, if a predator reaches you when you are sleeping in an unfamiliar setting for the first time, the left side of your brain would be the one to wake you up so that you can run or fight. Such wakefulness wasn’t found when volunteers slept in familiar places.

The brain's left side is famous for being the analytical and logical one, and the right side is supposedly creative and imaginative. In reality, this distinction is oversimplified; the left and the right sides of the brain differ in many aspects and are responsible for various functions. However, when it comes to the FNE, there’s a clear distinction between the hemispheres. In Tamaki’s study, researchers hypothesized that the left brain hemisphere responds the most because that’s where networks of brain regions are most interactive in the brain. But further research is needed to truly understand what causes these electrical fluctuations.

Your brain won't let you entirely rest in a new place due to FNE, yet consecutive nights shouldn’t typically propose a problem: Brain asymmetry wasn’t visible anymore during the following sleep sessions in the study published in Current Biology. According to the researchers, this possibly happened because people got used to their surroundings and the brain could relax and rest. However, other studies have reported that FNE can continue to disrupt people's sleep for up to four nights in a new place.

The FNE isn’t a humans-only kind of phenomenon. Some animals, like family dogs, also struggle to sleep in unfamiliar places, with their brains staying somewhat alert throughout the night. Other creatures do it a bit more noticeably. Birds and dolphins literally sleep with one eye open to stay alert. Humans end up doing this metaphorically. We don't sleep with one eye open, but with one side of our brains instead.