Transparent Brain Could Clear Up the Mysteries of the Mind

By making a mouse brain transparent, researchers are able to visualize its architecture. 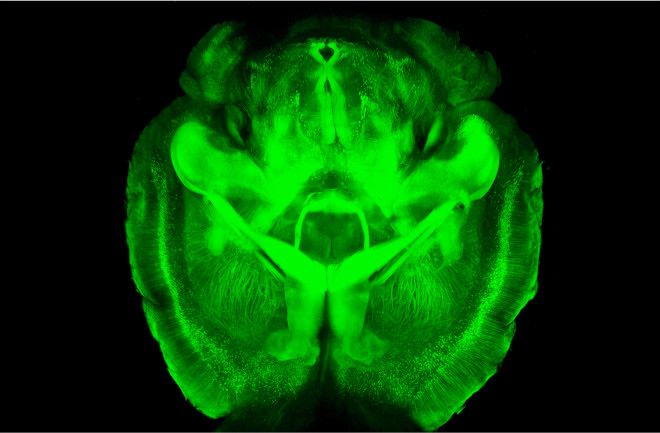 Mapping the structure of the human brain is a daunting task: Billions of cells make vast numbers of connections, and tracing these tangled fibers is so labor-intensive that analyzing just one square millimeter of tissue takes years.

Into this murky mess, Stanford University neurobiologist Karl Deisseroth has brought CLARITY, a technique that turns brain tissue transparent while maintaining its structure. The method, described in Nature in April, makes it possible to inspect the 3-D architecture of an intact mouse brain in microscopic detail.

Traditionally, scientists explore neuroanatomy in animals by injecting dyes or stains that illuminate specific nerve cells and connections. They then kill the animal and slice its brain tissue thin enough so that light can shine through it under a microscope, revealing the structure within each slice.

But reconstructing 3-D architecture from a stack of slides is imprecise and slow. And neuroanatomists have been unable to look at a whole brain at once because the fatty insulation that coats neurons deflects light and obscures their view.

With CLARITY, a mouse brain or a chunk of human brain is first soaked in a hydrogel solution. This goo links molecules together when heated, stabilizing proteins and nucleic acids to maintain the integrity of the tissue. The team then adds an electrically charged detergent to dissolve fats coating the neurons. When an electric field is applied, the current strips away the detergent and fat.

The result: a brain like glass, visible in fine detail without slicing and dicing. Deisseroth says the technique will help reveal faulty connectivity in neurological and psychiatric diseases like autism by making it easier to study brain wiring. In studying these diseases, he says, “A limitation has been: How are circuits wired up?”

[This article originally appeared in print as "Clearing Up the Mysteries of the Brain."]