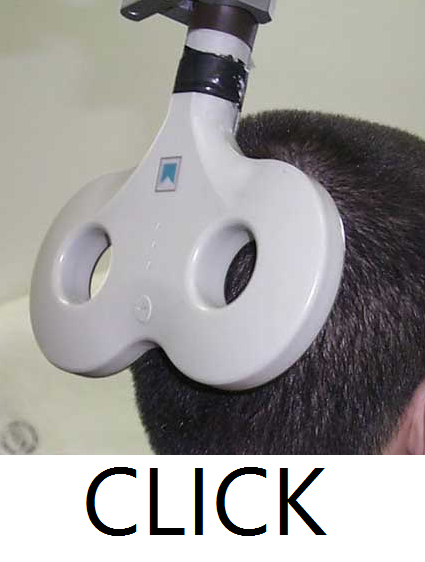 A TMS kit is essentially a portable, powerful electromagnet, called a ‘coil’. Switching on the coil causes it to emit a magnetic pulse, and this magnetic field is strong enough to evoke electrical activity in the brain. So, by placing the TMS coil next to someone’s head, neuroscientists can activate the brain region closest to the coil.

The effects can be dramatic: TMS over the motor cortex, responsible for muscle control, causes muscle twitches. Stimulation of the visual cortex makes people ‘see’ flashes of light. It’s as easy as waving a magic wand.

One major application of TMS is in research, and it works like this: suppose you want to test the theory that a particular part of the brain is involved in performing a particular cognitive task. You zap people with a TMS pulse aimed at the brain area of interest, just when they’re in the middle of doing the task. If your theory’s correct, and the brain area is involved, this ought to impair their performance on the task, by disrupting or overstimulating the region just when it’s needed.

Pretty neat, but there’s a catch. TMS is noisy – every pulse makes a loud “click” sound. The problem is that this noise could also affect performance on the task, by distracting the subject for example. So in order to be sure that the effects of TMS on cognition are really about the brain stimulation, not just the noise, you need a control condition. Sometimes neuroscientists use TMS aimed over a different part of the brain as a control; others use ‘sham TMS’, a device that looks and sounds like a TMS coil, but without the magnets.

However, according to a paper just out by Maastricht neuroscientists Duecker and Sack, controlling for the effects of noise is a lot harder than it sounds: Pre-stimulus sham TMS facilitates target detection.

Duecker and Sack used sham TMS on volunteers performing a simple task in which volunteers had to push a button as soon as they saw a visual target appear on screen. They found that the “clicks” of the sham TMS could help people respond quicker, especially if the clicks happened within a narrow time-window before the target appeared.

Duecker and Sack write that they’re not criticizing the use of sham TMS, but that it must be used carefully because:

depending on the experimental design and research question, these specific effects of sham TMS can lead to false positive or false negative results. Our findings thus have direct implications for many TMS experiments, and could be used to guide the choice of an appropriate control condition in the context of a concrete research question.