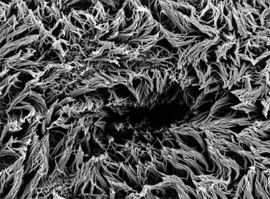 I have seen the future, and it is cilia. Yes, you read that right: those trillions of tiny hair-like extensions that carpet every inch of your body could bring scientists' visions of a universal class of "smart" materials

that change and adapt when subjected to various stimuli closer to reality. These artificial cilia could one day do everything from testing drugs and monitoring air quality to measuring glucose levels and detecting electromagnetic fields. While largely ignored over the past century (or, at best, dismissed as being purely vestigial), scientists are finally beginning to appreciate the many vital functions they perform in and outside of our bodies. Much like an antenna or sensor, cilia gather information from their surroundings and react—by activating a cellular process or shutting down cell growth, for example—if something seems amiss. They can also act as miniature roads or railways, carrying dirt, bacteria and other noxious materials out of our lungs or shuttling a fertilized egg from the ovary to the uterus. And, perhaps most importantly, cilia make it possible for us to see, hear, smell, and otherwise feel the outside world. Now some researchers believe that cilia-like structures could bring their sensory prowess to medicine, environmental monitoring and a number of other fields. Leading the charge is Marek Urban of the University of Southern Mississippi who has created a copolymer film with hair-like filaments that mimics the functions of normal cilia 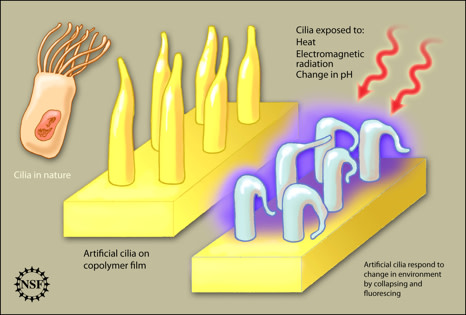 Each of these artificial cilia is equipped with an array of sensors that enable it to respond to the slightest fluctuations in temperature, pH, or light by folding over, shrinking or even changing colors. These unique behaviors are the direct result of molecular rearrangements and conformational shifts in the structure of the copolymers. For instance, when Urban and his colleagues exposed the cilia to hydrochloric acid vapors, they immediately bent towards them and changed colors from yellow to red. A longer exposure resulted in further bending and a change of color from red to purple. Yet when the researchers switched to using ammonium hydroxide vapors (which have a much higher pH), the cilia reverted to their original shape and color. The cilia similarly responded to variations in temperature and different wavelengths of light by shrinking, modifying their surface morphologies, and becoming fluorescent. Though more proof of concept than anything else, this work clearly demonstrates the "smart" potential of these copolymers. And, as the NSF release notes, it looks like Urban and his collaborators aren't wasting any time putting them through more trials and dreaming up new applications. If scientists can further expand their functionality and incorporate them into other technologies (eventually even our bodies), the cilia could become a ubiquitous component of our future everyday lives—helping to treat diseases or simply supplementing our sensory tool set by granting us new abilities.

The SciencesThe Beautiful Patterns Left Behind When Whiskey Dries