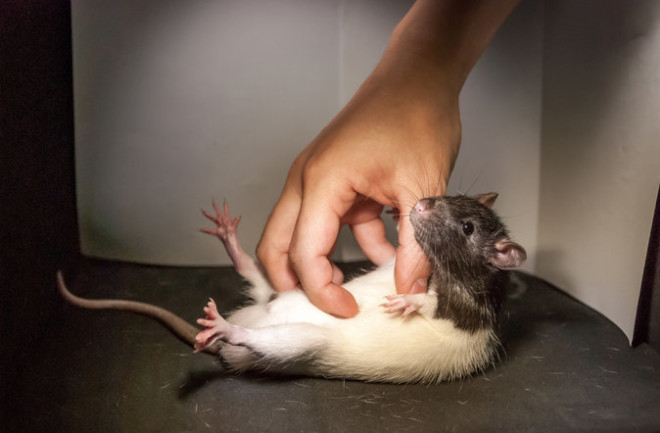 A rat hard at work discovering the neural basis of tickling. (Credit: Shimpei Ishiyama & Michael Brecht) For social animals, living and working together is all about building and shoring up the bonds that tie our lives together. Animals that live and work in concert with one another rely on complex rituals to affirm their connections. Mutual grooming, acts of compassion, social play and other behaviors factor into building trust, but one of the oldest and most reliable methods of bringing species together is touch. And tickling various species of animals is one way scientists are learning more about building tactile trust.

Enjoyed By More Than Just Humans

Tickling may not be fully understood by researchers, but we do know its laughter-evoking power extends beyond humans. Research in both primates and rats has shown they respond to tickles with vocalizations and joyful gestures — primates even tickle each other. https://www.youtube.com/watch?v=3UV9VmbDIAA Now, a new study pins down the location in the brain where tickles resonate, at least in rats. It's the same region that lights up during playtime, indicating there's a parallel between tickling and other forms of beneficial social interaction. https://www.youtube.com/watch?v=KnHtxknPVvg Two researchers from the Bernstein Center for Computational Neuroscience in Berlin turned into rat tickle monsters to draw their conclusions. Electrodes implanted in rats' skulls measured regions of the brain activated during the tickle sessions. Outwardly, rats squirmed about playfully while being tickled and emitted ultrasonic squeaks associated with pleasure — the rat equivalent of laughter. Even more telling, after a tickling, the rats jumped and frolicked about their cages, displaying a behavior known as "Freudensprungen," or "joy jumps," and would seek out the researchers hands for more attention. When the researchers looked at the rats' brain activity, tickling appeared to activate the trunk region of the somatosensory cortex, which responds to touch. When they electrically stimulated the somatosensory cortex in the rats without tickling them, they got the same reaction — delighted squeaks. They published their research Thursday in Science.

Knowing where we experience tickles in the brain may help us understand the phenomenon, but it still doesn't tell us why we've developed such an intense response to being touched in certain areas. Gentle tickles, like the sensation of an ant crawling along your leg, could serve as a simple defensive mechanism, but the kind of tickles that evoke laughter — called gargalesis — are harder to explain. Social interactions may be part of the story — laughing and experiencing pleasure with members of your own species will certainly endear them to you, but there are aspects of tickling that are still mysterious. Why we can't tickle ourselves, for example, is still a matter of debate. Perhaps predicting our own movements ruins the surprise, or our brains shut down sensations when we move. Researchers still aren't sure. The reason some areas of our bodies are more ticklish than others is unknown, as well. The same rules seem to apply to rats.

No Tickles When Stressed

The Berlin researchers also uncovered another mystery: rats won't respond to tickling when they're stressed. When the researchers placed the rats on elevated platforms, or flashed lights in their faces, they stopped reacting to tickles. Still, the research adds to our understanding in one crucial way by connecting tickling to play and other social activities. Tickling has already been found to help socialize isolated rats and release dopamine in their brains, showing that it can create important benefits for animals. In addition, research in primates has shown that they laugh much like we do when tickled. However tickling began, it appears to have become useful as a way for some animals to bond with each other. And, the origins of tickling lie far behind us in our evolutionary timeline. We split from mice and rats around 80 million years ago, indicating that tickling has been around at least that long. It seems that, even before there were humans, there were tickle monsters.