Thought Broadcasting: When Your Thoughts Are No Longer Your Own

The delusion that other people are listening in on personal thoughts is sometimes associated with cases of schizophrenia and other psychotic disorders. 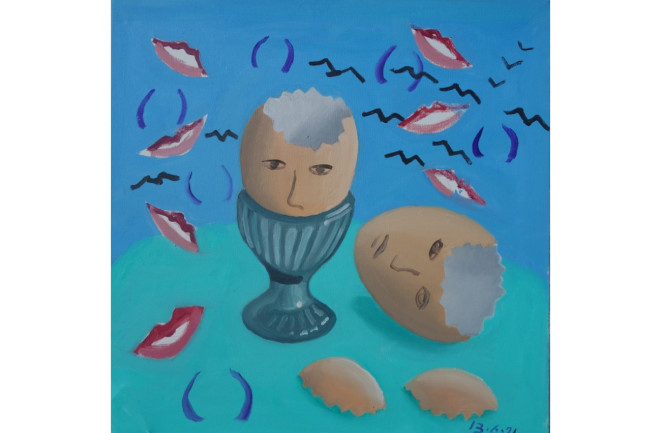 London tea broker James Tilly Matthews (despite protesting his sanity) was diagnosed with schizophrenia after being institutionalized at the Bethlem Hospital in early 1797. The reason? Matthews had adopted strange, politically based views and theories, leading him to send unsolicited letters to Lord Liverpool that accused certain politicians of misapplying their power. Later, he disrupted the House of Commons to protest this supposed treason.

During his indefinite hospitalization, however, Matthews gravitated toward a separate fantasy involving a machine he called the “Air Loom.” A gang of diabolical criminals, headed by a man named Bill the King, supposedly had invented and controlled the machine near the London Wall — a landmark in close vicinity to Bethlem Hospital.

Through the controlled modulation of magnetic rays, Matthews claimed that the Air Loom could inflict physical harm, preventing the circulation of blood and inhibiting the mobility of certain body parts. This latter process Matthews called “lobster-cracking” or “sudden death-squeezing.” But he also affirmed that the device was capable of “thought-making” and “brain-saying,” functions that he claimed to have been subjected to. These involved the surveillance, extraction and replacement of Matthews’ thoughts with others.

What Is Thought Broadcasting?

Of the nearly 300 diagnosable mental disorders outlined in the DSM-5, a diagnostic manual published by the American Psychiatric Association, conditions involving the onset of paranoid delusions and hallucinations are widely regarded to be the most debilitating. This is reflected in the equally alarming suicide rates for people diagnosed with psychotic disorders, such as those suffering from schizophrenia who — in some samples — have a 12-times greater risk than the general population, according to a study published in the French psychiatric journal L'Encéphale.

The symptoms of these disorders are categorized as either positive or negative, although they can manifest simultaneously or individually at different times. Negative symptoms, denoted by a lack of motivation, asociality or difficulty in expressing emotion, are the opposite of their positive counterparts and are generally regarded as more subdued. Equally debilitating are positive symptoms, which are synonymous with highly animated and exaggerated traits like hallucinations, disorganized behavior and delusions.

One such eccentric delusion, known as thought broadcasting, is “a category of disordered thinking known as thought interference,” says Sarah Kopelovich, an assistant professor of psychology at the University of Washington. “The individual is highly convinced that other people are able to hear their inner thoughts. They may believe that only those in their immediate vicinity can hear their thoughts, or they may be concerned that their thoughts are being broadcast through mediums such as tv, radio, or the internet,” she adds.

Among the seven types of delusions, thought broadcasting is classified as "persecutory," since someone who gravitates towards this idea assumes they’re being tormented or endangered in some manner. Although this delusion can be seen in cases of schizophrenia and other psychotic disorders, such as delusional disorder, brief psychotic disorder or schizoaffective disorder, thought broadcasting can also occur in manic episodes — a psychological phenomenon characteristic of bipolar disorder.

Read More: Why Schizophrenia Is Different for Women

It’s been proposed that thought broadcasting shares similarities with other delusions. In 1959, German psychiatrist Kurt Schneider (largely credited for expanding the diagnostic framework and understanding of schizophrenia) proposed a tiered system for differentiating between them. The first tier, called “first-rank symptoms,” demonstrated that thought broadcasting is closely related to other thought-related delusions — including thought insertion, which is the belief that one’s ideas and thoughts belong instead to other people and have been inserted into their conscience.

A more recent circumstance involving thought broadcasting concerned the late British artist Bryan Charnley. Shortly after enrolling in the Central School of Art and Design in 1969, Charnley suffered the second of two mental breakdowns attributed to schizophrenia. After receiving electroconvulsive therapy, he began his most notable works (a 17-painting self-portrait series accompanied by a journal in which he recorded his abnormal experiences) in March 1991 upon the urging of Marjorie Wallace, CEO of the mental health charity SANE.

Although Charnley’s first self-portrait appeared conventional, further iterations became more abstract; some intermingled with dots, disordered lines and strange shapes. His journal descriptions, logged on the same day each painting was completed, provided troubling insight into his divorce from reality as he became preoccupied with concerns that others could interpret his thoughts.

Amid descriptions of his cocktail of antipsychotic and sleeping medications, he communicated his paranoia, writing in one entry, “the person upstairs was reading my mind and speaking back to me to keep me in a sort of ego crucifixion. I felt this was because I was discharging very strong vibrations which could easily be interpreted.” In the form of wavy lines emanating from his head, Charnely illustrated these “vibrations,” which he subsequently declared could be interpreted by others through extrasensory perception (ESP).

In one work completed on May 23, 1991, Charnley expressed his loss of personal agency, stating that his central concern was thought broadcasting: “I was much worried about radio and television. [...] I seemed to intertwine with their broadcasted waves and expose myself completely; which I found humiliating.” As noted in his journal, his fixation on thought broadcasting evoked feelings of hopelessness, depression and suicidal ideation, in addition to an opposition to social interaction. Unfortunately, after completing his last painting less than two months later, he took his own life.

How Is Thought Broadcasting Treated?

Because thought broadcasting is usually associated with an underlying psychiatric abnormality — such as schizophrenia or a related disorder — immediate access to mental health treatment is critical. “Thought broadcasting is highly amenable to treatment, typically, consisting of a combination of cognitive behavioral therapy and medication,” Kopelovich says.

Intrusive thoughts, which are involuntary and upsetting thoughts and images that can be violent or sexual-themed, might be an area of grief for those affected by thought broadcasting. “The immediate rush of shame may be quickly followed by the concern that others could perceive the [intrusive] thought,” Kopelovich says. “This concern causes additional distress — such as compounded shame and anxiety. As a result, the individual may withdraw from others and restrict their activities in public places.” These frequent and unwanted thoughts have also been cited in cases of obsessive-compulsive disorder (OCD), excessive anxiety and depression.

Certain cognitive behavioral therapies can be foundational in eliminating these feelings of shame by normalizing and rationalizing these troubling experiences. Moreover, a therapist “will ensure that they build a safe and accepting therapeutic environment,” Kopelovich says, progressing into different stages where delusions can be challenged and managed in a sensitive manner.

The prescription of medication, however, varies depending on the specific disorder catalyzing the eclectic thinking patterns. For those diagnosed with schizophrenia, they can on some occasions be prescribed certain types of antipsychotic medication to subdue the complications and behaviors associated with their mental illness.

More From Discover
Mind
Bizarre Fever Dreams Are Common, But Science Hasn't Figured Out Why
Mind
Psychedelic Drugs and Near-Death Experiences Decrease Fears of Dying
Mind
Sleep Deprivation Can Damage Social Interactions
Mind
Why Deep-Cleaning Videos Are So Satisfying to Watch
Mind
The Psychology Behind Cults
Health
Is Crying Good For You?
Recommendations From Our Store
My Science ShopDiscover STEM Kits
My Science ShopDiscover 2022 Calendar
My Science ShopStrange Science
My Science ShopElements Flashcards
Shop Now
Stay Curious
Join
Our List