This Is Your Brain on LSD 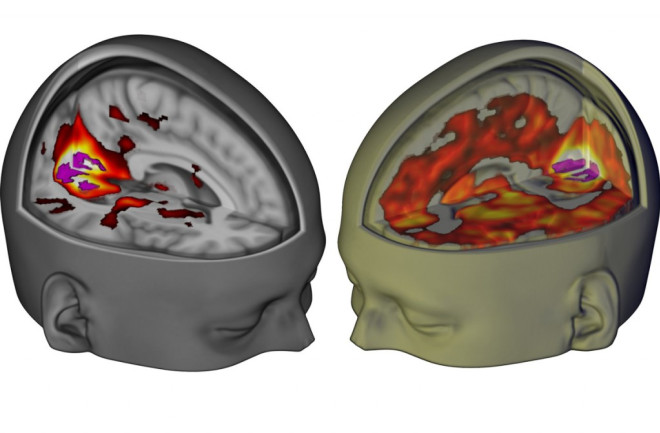 This image shows how much more of the brain contributes to the visual experience under LSD than under placebo. (Credit: Imperial/Beckley Foundation)

The psychedelic drug LSD is known for the wild hallucinations it conjures, and its effects have been portrayed by Hollywood in movies like Easy Rider and The Big Lebowski.

But actual studies of LSD and its effect on the brain have been few and far in between, due to its classification as a Schedule I drug. But a new study from researchers in the United Kingdom delves into the science of an LSD-enhanced trip using bran scans to observe 20 patients under the influence of the drug.

The researchers used a trio of neuroimaging techniques to examine how LSD influenced blood flow and magnetic fields in the brain. They also studied how LSD affected communication between various parts of the brain. When LSD is ingested, researchers found, disparate parts of the brain that are responsible for processing things like touch, hearing and movement link together, leading our brains to produce unconventional images and sensations.

After consuming LSD, researchers say that regions of the brain that normally don’t “speak” to each other begin communicating. The researchers say that the volunteers could “see with their eyes shut” because their visual cortex, for example, was receiving input from non-visual stimuli.

The brains of the study subjects bore striking similarities to how our brains look as infants, before they fully mature, said lead author Dr. Robin Carhart-Harris, from the Department of Medicine at Imperial College London in a press release. As our brains grow, they become more compartmentalized, and different regions further specialize in specific tasks.

Taking LSD seems to transform our brains from a cubicle-laden office of sorts to an open-concept plan where the walls have disappeared. As a result, users experience strange visions and odd revelations — stereotypical hallmarks of a drug trip.

Besides gaining insight into what peoples’ brains look like when they’re tripping out, the researchers say their work could also reveal new approaches to combat mental illnesses like depression. Researchers published their findings Monday in the journal Proceedings of National Academy of Sciences.

Woodstock Was on to Something

In addition, a separate study published in March in the journal European Neuropsychopharmacology paired LSD with music to see how the combination of stimuli would affect participants.

Turning on music while consuming LSD resulted in stronger hallucinations and visions, because the tunes strengthened the connections between the visual cortex and a region of the brain called the parahippocampus, which controls mental imagery and personal memory, the researchers say. Why music affects an LSD trip in this fashion isn’t known, and scientists also aren’t sure if sounds — of any nature — would create the same effect.

In the study published Monday, the researchers found that the parahippocampus was also associated with the phenomenon of “ego-dissolution” that some LSD users experience. While on LSD, the parahippocampus stops communicating with the retrosplenial cortex, a poorly understood region of the brain responsible for episodic memory, among other things. Severing the link between these two regions results in stronger feelings of connectedness in participants, according to their findings.

Understanding such experiences could help us understand nature of consciousness — a goal that may sound like the result of a drug trip, but is key to improving mental health.