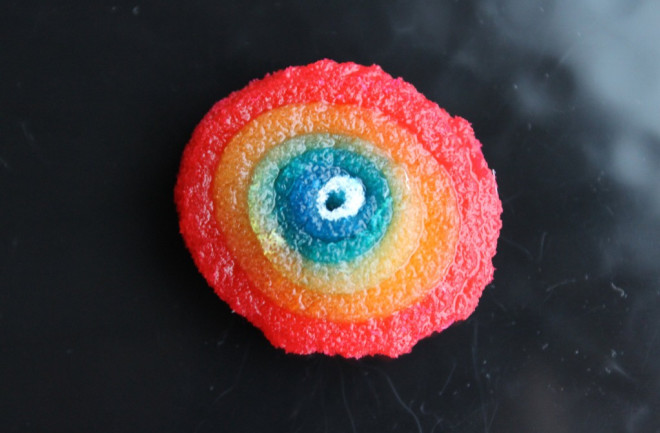 You may have heard someone's memory praised with the saying "You have a brain like a sponge." Well, here’s a twist: a sponge that’s like a brain.

A research team from Tufts University in Boston constructed a functioning 3-D brain model by seeding spongy silk scaffolds with mouse neurons. The researchers’ model was a happy home for cells, since it was a 3-D, layered environment that mimicked the structure of the real thing. It also functioned like the real thing. Researchers say their model will serve as a useful, nondestructive way to study, in real-time, traumatic head injuries such as concussions.

Growing artificial brain tissue isn’t new: neurons are routinely grown in a 2-D environment such as a petri dish. However their complex branching structure is nearly impossible to replicate in a flat environment. To provide a brain-like matrix, researchers started with six layers of silk harvested from moth cocoons, mimicking the six layers of the human cortex (and dyed so they could easily be differentiated). The pores in the layers of scaffolding were varied in size and orientation to simulate the structure of the human cortex. Researchers then seeded this structure with thousands of cortical neurons harvested from rats. Within days, the neurons started growing, forging connections that spanned the model’s layers – just like they would in a real brain. They also showed similar qualities as neurons in an intact brain, including their electrical activity and responsiveness. Furthermore, the 3-D structure improved the transport of oxygen and nutrients to the cells, so the cells survived about 9 weeks – longer than other models. Researchers believe they could extend the life of their model by electrically stimulating the tissue to simulate a real-world environment.

After building their model, researchers dropped an 11-gram weight from various heights to injure the brain and assess its activity in real time – something you can’t do with humans and animals. The brain tissue’s physiological response to trauma was consistent with past research, proving its efficacy as a model. Researchers published their findings

Monday in Proceedings of the National Academies of Science. Going forward, researchers hope to incorporate other types of brain cells in their model to better mimic the brain’s complexity. Researchers also said scaffolds could be shaped like specific parts of natural brains for an accurate simulation. As to how long it would be before you could grow your own pet brain by just adding water, however – no word yet.