These Are the 24 Sounds Humans Use to Communicate Without Words

A frustrated sigh, a squeal of delight, a gasp of terror and more. 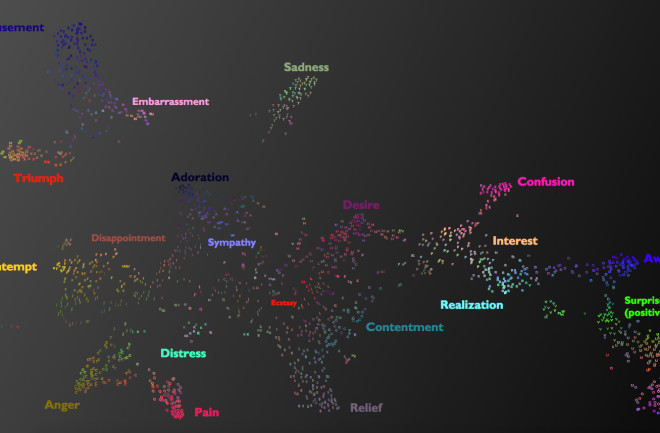 Ever catch yourself letting out a frustrated sigh, a squeal of delight or maybe a gasp of terror? These off-the-cuff vocalizations are called vocal bursts. And in a new study, researchers from the University of California, Berkeley have mapped out a record number of them.

To start things off, the researchers asked 56 people, some professional actors and some not, to react to different emotional scenarios. From these reactions, the team recorded more than 2,000 vocal bursts. Next, they used Amazon Mechanical Turk, a website that enables you to outsource tasks you can’t relegate to computers, to recruit more than 1,000 people to listen to the recordings. As the recruits listened, the researchers had them rate the vocalizations based on the emotions and tone (positive or negative) they thought the clips conveyed.

Previous studies had pegged the number of emotions we can express with vocal bursts at around 13. But when the UC Berkeley team analyzed their results, they found there are at least 24 distinct ways that humans convey meaning without words.

“Our findings show that the voice is a much more powerful tool for expressing emotion than previously assumed,” said study lead author Alan Cowen, a psychology graduate at UC Berkeley, in a press release.

Along with the paper, published in the journal American Psychologist, Cowen and team have also made an interactive map of the vocalizations publicly available. Each point of the map you move your mouse over lets you hear that particular vocal burst. So, if you quickly wiggle your cursor around, say, the elation and triumph branch, you’ve got your own little cheer squad. Or if you zip back and forth in the amusement branch, you’ve basically got a laugh track. It’s perhaps a little too entertaining.

Aside from being amusing, the map has practical applications, too. The team says it could be useful in helping robotic devices better pin down human emotions. It could also be handy in clinical settings, helping patients who struggle with emotional processing.

“It lays out the different vocal emotions that someone with a disorder might have difficulty understanding,” Cowen said in the press release. “For example, you might want to sample the sounds to see if the patient is recognizing nuanced differences between, say, awe and confusion.”

Additionally, the study looked only at U.S. English-speakers. The results would undoubtedly vary if people from other countries or who spoke other languages were surveyed.

Regardless of how it’s used, the map is a reminder of just how vital these subtle tones can be. “These results show that emotional expressions color our social interactions with spirited declarations of our inner feelings that are difficult to fake, and that our friends, co-workers, and loved ones rely on to decipher our true commitments,” Cowen said.