Social scientists describe the well sibling syndrome for kids who feel invisible to their sibling with special needs, and those feelings can go unnoticed. 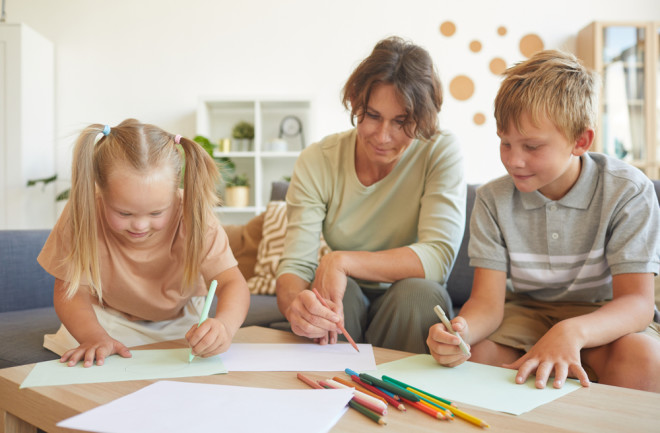 Feeling invisible to a sibling with special needs is one experience that social scientists describe as the “well sibling syndrome.” Kids who have siblings with cognitive delays, physical disabilities or mental health issues can feel ignored or defined by their sibling’s special needs.

A pediatrician wrote about an experience he had when he was 12-years-old and flying with his brother who had autism to visit a family member. A passenger wanted to know whether the brother had friends, what grade he was in and what foods he liked to eat. When the flight ended, the pediatrician realized the passenger had been so focused on his brother that she never even asked his name.

Researchers have long overlooked sibling dynamics in aspects of family psychology. Social scientists are learning more about the experience of well siblings, including how parents can treat them differently or how they often feel ignored or excluded. Problematically, well siblings tend to keep these feelings to themselves.

The Differences Within Well Sibling Syndrome

Well sibling syndrome is a broad term that encompasses many distinct experiences. For some children, growing up with a sibling who has a terminal disease can mean their family experiences a disruptive diagnosis that eventually leads to a loss.

Despite these differences, research has found a shared common response among well siblings — avoidance. Studies have shown that children with siblings who have chronic physical disabilities, for example, avoid talking about it with both their parents and siblings.

Similarly, studies have found that well siblings of children with terminal diseases, such as cancer or a genetic disorder, are also more likely to avoid discussing their sibling’s situation. In one study, half of parents with a child who had a fatal disease said their well child never initiated talk about their sibling’s illness.

Researchers have documented the same silence among well siblings of children with either mental illness, such as bipolar disorder, or cognitive disabilities such as autism. Social stigmas toward both mental illness and cognitive delays are reasons that well siblings distance themselves from their siblings when outside the house.

Day-to-day life changes when a child goes through chemotherapy or other treatment for a life-threatening disease. Similarly, daily life is different for families who have children who can’t manage personal care, such as using the toilet or bathing. One study found that kids whose siblings have intense daily needs were more affected than kids whose conditions were more manageable.

Although well siblings don’t always share their problems with their parents, qualitative research has found that many have insight into their own emotional responses. Some described feeling a need to people please and make others in the family happy, as if it were their responsibility.

Well siblings have also articulated the persistence of feeling ignored because their sibling requires more attention. Although these kids understand why their parents are preoccupied, they also say it feels like a rejection.

For some well siblings, feeling they receive less attention made them more self-reliant and independent from the family. If they couldn’t interrupt a parent who was trying to feed a sibling or sort through medical bills, then they learn to manage themselves. This also meant coping on their own with undiagnosed anxiety and depression.

Well siblings might have to give up a toy to quiet a sibling’s tantrum. They might find that most of the family’s spending money is reserved for their sibling’s medical bills. Or they can feel their parents have developed a different standard for each of their children.

Well siblings of children with mental illness or cognitive disorders such as autism have reported they feel their parents will tolerate their sibling’s outbursts, but chastise them if they do the same. Parents might expect the well sibling to do well in school or have good manners, but excuse the special needs child from performing the same.

Some report resentment toward both their parents and sibling. Resentment can also result from the well sibling feeling as though they have been asked to take responsibility for their sibling’s care.

What does this resentment mean when the children become adults? Researchers don’t know yet. They have conducted long-term studies to see if well siblings are more likely to have behavioral issues than kids without sick siblings. But social scientists haven’t really asked adult well siblings how they feel about their childhood experiences. It’s why some researchers say the sibling dynamic needs more research in the social sciences.