Remember the 'voodoo' fMRI controversy? Well, I just came across a new voodoo-ish paper - just in time for Halloween. The study, published in

comes from Franziska Plessow and colleagues of Boston. The main claim is that a dose of oxytocin reduced the response of "reward-related food motivation brain regions" to pictures of high-calorie foods, suggesting that the hormone might be of use in the treatment of obesity.

However, I have some questions. In their key analysis, Plessow et al. compared the fMRI response to high-calorie stimuli (over control stimuli) on oxytocin vs. placebo. The 'blobs' from this contrast within the brain's reward-related VTA region can be seen below as (a). The bar chart (b) shows the signal extracted from the peak voxels of this contrast: 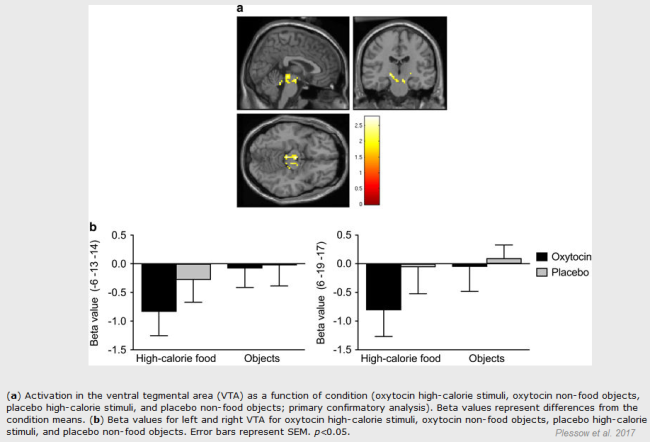 Here's the description of this method:

Oxytocin-related changes were tested using contrasts that reflected the difference in beta weights between oxytocin high-calorie food images minus oxytocin non-food objects vs placebo high-calorie food images minus placebo non-food objects. For the primary confirmatory analysis of oxytocin effects on VTA activation, we used max voxel coordinates from the left and right hemispheres of the group level statistical maps at the centers of 2.5mm spheres and the beta values using Marsbar software.

The trouble is that this is a circular (aka 'voodoo') analysis strategy. If we select the peak coordinates of the oxytocin-placebo contrast, the values extracted from these peaks (i.e. (b) above) are likely to show an oxytocin-placebo difference, but this might just be a chance difference. So, while Plessow et al. report statistically significant oxytocin-placebo differences in the signal extracted from the peak voxels, the circularity makes these invalid. The way to ensure that a difference isn't due to chance is to do an analysis over the whole area of interest, with no selection but corrected for multiple comparisons. As far as I can see, when Plessow et al. report blobs, these are not corrected for multiple comparisons in any way (p<0.05 uncorrected threshold.) The study sample was also small, consisting of only 10 obese or overweight participants. So overall, this paper is a bit of a Halloween horror story. A harsh verdict perhaps, but bear in mind that senior author Elizabeth A. Lawson reports having a rather relevant conflict of interest:

Dr Lawson is a member of the scientific advisory board of OXT Therapeutics and has a financial interest in the company.

The goal of OXT Therapeutics lies in "Developing Novel Oxytocin Analogues: An Approach for Obesity and Metabolic Disorders". So it's fair to say that these results could be of commercial value for the company, and might end up guiding drug development, which to my mind makes it important to check their validity. h/t: Nils Kroemer