According to a Japanese case report, a man developed a fetish for women's underwear due to decreased brain blood flow. Here's how neuropsychiatrists Koji Masuda and colleagues describe the patient:

A 24-year-old male patient who was arrested for stealing underwear and referred to our hospital for evaluation. The patient had stolen women’s underwear on multiple occasions since the age of 11 years, although he showed no interest in underwear that belonged to his mother, sister and girlfriends. He was an academically strong student.

bilaterally decreased cerebral blood flow in the temporal and occipital lobes. Other neurological conditions were ruled out, and he was diagnosed with fetishism on the basis of history and examination and successfully treated with behavioral therapy. 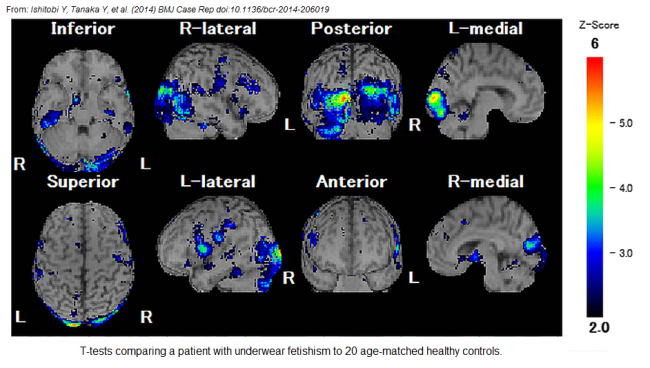 Well. I have to say this is a rather odd paper. The SPECT finding of reduced blood flow in the temporal and occipital lobes may or may not have nothing to do with the fetish. Masuda et al say that "Klüver-Bucy syndrome is characterized by temporal lobe dysfunction and altered sexual behavior" which is true, but that syndrome refers to people (or animals) who've suffered widespread destruction of parts of the temporal lobes - not just lowered blood flow. The patient, remember, also had low blood flow in his occipital lobes. Destruction of these same areas would be expected to cause blindness - but the patient doesn't seem to have any visual problems (none were mentioned). This tends to suggest that the SPECT abnormalities are not functionally important. And worst of all, the authors appear to have used no multiple comparisons correction in their statistical testing. As far as I can tell, they simply ran a t-test for each voxel in the brain, and some of them were significant at (I think) p = 0.05 as seen on the brain map above. This is the Dead Salmon fallacy. The results might just reflect normal variation.