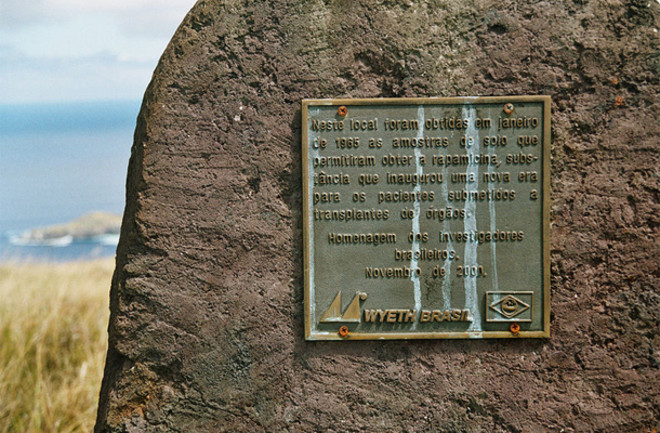 A plaque on Easter Island commemorates the discovery of rapamycin

You don’t have to go far to find supposed ways of delaying the ageing process, from oddball diets to special supplements. But these fountains of youth are all hype and no substance. For now, there are only a few methods that have consistently extended the lives of mammals. Eating less – formally known as “caloric restriction” – is one of these. Rapamycin, a drug originally found in Easter Island bacteria, is another. It can lengthen the lives of old mice by 9 to 14 per cent, and it boosts longevity in flies and yeast too.

But rapamycin has its downsides. For a start, it strongly suppresses the immune system. That is why it is currently given to people who receive new organs, to stop them from rejecting their transplants. Rapamycin can also increase the risk of diabetes. In mice, rats and humans, the drug weakens the ability to stabilise levels of sugar in the blood. Individuals who take it for a long time become resistant to insulin, and intolerant to sugar.

You’d expect the opposite. Longer-lived animals ought to be better at dealing with sugar, and less likely to suffer from insulin resistance. Indeed, that’s what you see in individuals that cut down on calories. So why does rapamycin behave so paradoxically?

Dudley Lamming from MIT has discovered a possible reason for its two-faced streak. Rapamycin blocks a protein called TOR (which, fittingly, stands for “target of rapamycin”). TOR was the first known protein that influences longevity in all of the four species that scientists commonly use to study ageing: yeast, worms, flies and mice.

TOR runs in two different gangs, known as mTORC1 and mTORC2. In each one, it joins forces with a separate group of proteins. Lamming found that these collectives (biologists call them complexes) do different jobs, and rapamycin exerts different effects by targeting each one. By disrupting mTORC1, it extends lifespan. By disrupting mTORC2, it messes up our ability to process sugar.

When he reduced levels of Rictor, and thus the mTORC2 complex, the rodents’ livers started producing extra sugar and they developed a severe intolerance to the stuff. A dose of rapamycin didn’t worsen any of these problems.

On the other hand, if Lamming deprived the mice of Raptor, and thus mTORC1, the mice were able to process sugar in the normal way. However, rapamycin no longer extended their lives.

David Harrison, one of the scientists who first showed that rapamycin made for longer-lived mice, applauds the new study, but is concerned about some aspects of the experiments. He notes that Lamming’s mice were too genetically similar, were treated with rapamycin for only a short amount of time, and were very young (the drug seems to have the greatest affect in old mice) and. To truly understand how rapamycin affects longevity, and how mTORC1 and mTORC2 are involved, he recommends longer studies with diverse older animals.

Nonetheless, the results suggest that some of rapamycin’s positive and negative effect can be split apart. It boosts longevity by blocking the mTORC1 complex, but it destabilises sugar levels by blocking mTORC2. And that suggests that if we target mTORC1, while leaving mTORC2 alone, we could get the age-extending benefits of rapamycin without its drawbacks (although there would still be that pesky immune suppression to deal with).

“This opens the way to uniquely drugging the complex (TORC1) that improves health in ageing, without the side-effect of poor glucose handling,” says Linda Partridge from University College London. “Now all they have to do is find a drug that does that – which is difficult!”

Although scientists are putting a lot of effort into finding new ways of blocking TOR, Harrison says that we know very little about whether chemicals that specifically block mTORC1 could delay the ageing process, even in simple creatures like yeast, flies or worms. He adds, “I hope the current paper stimulates such work.”