The Tragic History of Surgery for Schizophrenia

A compelling article in the Journal of Medical Biography

recounts the story of Bayard Holmes and Henry Cotton, two American "surgeon-psychiatrists" who believed that they could cure schizophrenia by removing parts of their patients' intestines (and other organs). What's more, both men tested their treatments on their own children - with tragic results. The article is by Jonathan Davidson of Duke University. 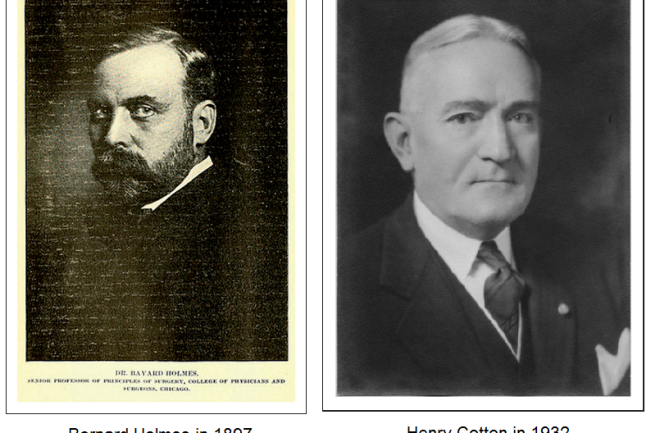 Holmes and Cotton had a theory to justify their extreme cures:

This was the idea that 'insanity' was actually a state of chronic intoxication, caused by some mind-altering substance or toxin produced inside the sufferer's own body. Proponents of the autointoxication theory didn't all agree on what this natural hallucinogen was, or on where it came from. Some held that the toxin was generated by the human body's own glands and organs, while others believed that it was produced by bacteria that had infected the host. Holmes and Cotton fell into the latter camp. Holmes (1852 – 1924) qualified in homeopathic medicine in Chicago in 1884, but Davidson says that his interests were in bacteriology, not homeopathy. Holmes soon embarked on a research career in microbiology. He later qualified in surgery and lectured at the College of Physicians and Surgeons in Chicago, which later became the University of Illinois College of Medicine. Interested in social issues, he even ran for mayor of Chicago in 1895, but came third. It seems that Holmes had no particular interest in psychiatry until 1905, when his own son, Ralph, developed dementia praecox (what would now be called schizophrenia) while a student. Holmes was devastated and devoted the rest of his life to researching the disease. He never trained as a psychiatrist, and regarded the profession with contempt. In 1916, he announced that he had found the cause of dementia praecox. He claimed that a particular kind of intestinal blockage was the root cause of the disorder. This blockage, he said, produced bacterial overgrowth that flooded the body with an autotoxin (histamine, he said.) On the basis of this theory, Holmes devised a surgical treatment for the disorder: making an opening into the intestine (via the appendix) to allow it to be irrigated (washed out) daily, to clear the bacteria and the toxin. Determined to help Ralph, he operated on his son - but he died four days later from complications of the surgery. Yet despite this, Holmes persisted with his surgical 'cure'. Davidson writes that

Holmes spoke to very few people about the tragedy [of his son's death]... he even expunged the case from his medical reports. In total, Holmes or his associates operated on 22 patients between 1916 and 1919, claiming several good successes as well as two fatalities. However, Holmes was unwilling to look critically at his findings and when Horry Jones, one of his research colleagues, could not replicate Holmes’ radiological and bacteriological results, Jones fell from grace and was fired.

Dr. Henry Cotton was one generation younger than Holmes. He qualified in medicine in 1899 in Maryland and went on to specialize in psychiatry, before studying in Germany with two legendary figures, Emil Kraepelin and Alois Alzheimer. He returned to the US to become director of an asylum, the Trenton State Hospital in New Jersey. Like Holmes, Cotton was a convinced believer in the bacterial autointoxication (or 'focal sepsis') theory of psychiatric illness, and of surgery for schizophrenia. However, Cotton differed from his predecessor in that

Unlike Holmes who limited his interventions to the intestine, Cotton removed teeth, tonsils, gall bladders, cervices, colons, thyroids and other body parts. All told, Cotton performed 645 colectomies at Trenton with approximately 33% each being for schizophrenia, manic-depressive and mild disorders. Cotton claimed astonishingly high success rates of over 80% but also acknowledged a mortality rate of 25 – 30%, explaining it away as due to the poor physical condition of patients with chronic psychosis... at times Cotton operated in the absence of consent or in defiance of family wishes.

Despite the enormous body count, Cotton was widely acclaimed as a researcher and psychiatrist, although there were skeptics:

In 1923 a group in New York reported what seems to be the first quasi-randomized controlled trial in psychiatry, to test Cotton’s theories. This study failed to show any difference in outcome between the surgical group and the untreated controls, with response rates being 38% and 47% respectively.

Cotton became a controversial figure, and he eventually lost his post as clinical director of Trenton, although he was allowed to remained as the director of research - and he continued performing surgeries (and teeth extraction) at his private clinic. So keen was Cotton on pulling teeth (to avoid the risk of future infection, and hence, mental illness) that he had all of his own wife and sons' teeth removed 'as a precaution'. Sadly, both of his two sons died by suicide, decades later. Holmes and Cotton seem to have never met, and Cotton never acknowledged any influence from Holmes. Nonetheless, Davidson says, they had a lot in common:

Both men were adroit in working the local political system, each was fixated on focal sepsis as the cause of psychosis, and each came to lose his capacity for objectivity in the pursuit of his goal. Neither man was open to criticism or disagreement [...] To continue with such a harmful practice in the face of negative or flawed evidence is more a sign of hubris than of scientific courage.

Cotton died in 1933, nine years after Holmes. Just three years later, in 1936, the Portuguese neurologist Egas Moniz published his first description of leucotomy - the destruction of certain brain pathways - as a treatment for mental illness. Thus began the era of psychosurgery, and the brain rather than the gut became the focus of interest for "surgeon-psychiatrists".