The Terrorist Inside Robin Williams' Brain

The journal Neurology published a unique and touching paper today: it's by artist Susan Schneider Williams, the widow of actor Robin Williams, who died by suicide in August 2014. It's titled The terrorist inside my husband's brain, the 'terrorist' being Lewy Body disease (LBD), the neurodegenerative disorder that, as Schneider Williams recounts, destroyed his life. 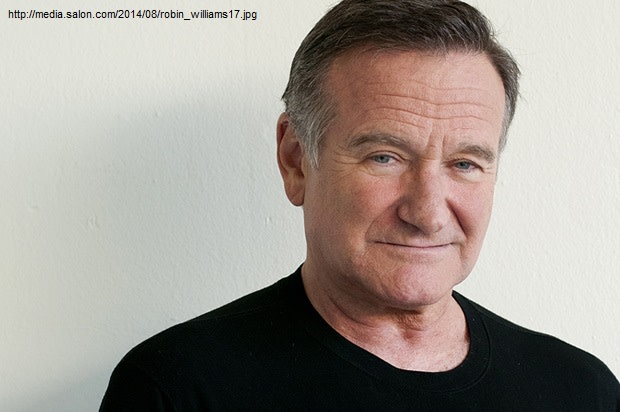 Here's how she describes the first signs of her husbands' illness:

The colors were changing and the air was crisp; it was already late October of 2013 and our second wedding anniversary. Robin had been under his doctors' care. He had been struggling with symptoms that seemed unrelated: constipation, urinary difficulty, heartburn, sleeplessness and insomnia, and a poor sense of smell - and lots of stress. He also had a slight tremor in his left hand that would come and go. For the time being, that was attributed to a previous shoulder injury. On this particular weekend, he started having gut discomfort. Having been by my husband's side for many years already, I knew his normal reactions when it came to fear and anxiety. What would follow was markedly out of character for him. His fear and anxiety skyrocketed to a point that was alarming. I wondered privately, Is my husband a hypochondriac? Not until after Robin left us would I discover that a sudden and prolonged spike in fear and anxiety can be an early indication of LBD.

Over the next 10 months, Williams' various symptoms worsened, along with his anxiety. He also began to suffer from paranoia, delusions, and - hugely problematic for an actor - memory problems.

During the filming [of Night at the Museum 3 in April 2014], Robin was having trouble remembering even one line for his scenes, while just 3 years prior he had played in a full 5-month season of the Broadway production Bengal Tiger at the Baghdad Zoo, often doing two shows a day with hundreds of lines - and not one mistake. This loss of memory and inability to control his anxiety was devastating to him.

Previously, Schneider Williams writes, she had always been able to reason with her husband and bring him out of his depressions. But as the disease progressed, this was no longer possible:

He was very concerned with insecurities he was having about himself and interactions with others. We went over every detail. The fears were unfounded and I could not convince him otherwise. I was powerless in helping him see his own brilliance... For the first time, my own reasoning had no effect in helping my husband find the light through the tunnels of his fear. I felt his disbelief in the truths I was saying. My heart and my hope were shattered temporarily. We had reached a place we had never been before.

On May 28th 2014, Williams was diagnosed with Parkinson's disease and prescribed pramipexole, but it didn't fully relieve his symptoms, and his mental state remained unstable. In late July he was switched to another drug.

As the second weekend in August approached, it seemed his delusional looping was calming down. Maybe the switch in medications was working. We did all the things we love on Saturday day and into the evening, it was perfect - like one long date. By the end of Sunday, I was feeling that he was getting better. When we retired for sleep, in our customary way, my husband said to me, “Goodnight, my love,” and waited for my familiar reply: “Goodnight, my love.” His words still echo through my heart today. Monday, August 11, Robin was gone.

An autopsy revealed the presence of pathological Lewy bodies, microscopic spheres of protein, in neurons all across Williams' brain. This finally revealed the underlying cause for Williams' Parkinsonism, depression, memory loss and other symptoms. Specialists said that it was "one of the worst LBD pathologies they had seen." Schneider Williams goes on to say that even if the LBD had been diagnosed earlier, it probably wouldn't have helped, as the disease is incurable. But she concludes with a message for the readers of Neurology:

I know you have accomplished much already in the areas of research and discovery toward cures in brain disease. And I am sure at times the progress has felt painfully slow. Do not give up. Trust that a cascade of cures and discovery is imminent in all areas of brain disease and you will be a part of making that happen.

The article is free to access and I recommend reading the whole thing. Neurology also has a podcast with an interview with Susan Schneider Williams, here.